The Shar Pei is also known by the names: Chinese Shar-Pei.

A relative newcomer to the Western world the Shar Pei, (which translates as ‘sand-skin' in reference to the harsh coat), has existed in southern China for more than 2,000 years. Its original function was to hunt wild boar, herd and protect livestock, and to guard the home of its owner. Some were also bred and trained for dogfighting which gave rise to the other name by which the breed was known - Chinese Fighting Dog. When the Communists came to power in the mid 20th century the government first levied a heavy tax on all dogs followed by a total ban on breeding. Dogs were then outlawed on the mainland which led to thousands being destroyed. Fortunately for the Shar Pei a few were resident in Hong Kong and from these the fancier, Matgo Law, was able to re-establish the almost extinct breed. It was only in the latter part of the 20th century that Shar Pei numbers increased to any great degree. As late as 1980 the breed was described in the Guinness Book of Records as the rarest dog in the world. As their popularity increased, due in no small measure to their unique appearance, there was a rush by unscrupulous breeders to meet demand, resulting in ill-considered breeding practices which produced many dogs of poor temperament. This problem has now largely been solved by careful and responsible breeders.

The well-bred Shar Pei is a calm, loyal and affectionate dog who, in the right hands, makes an outstanding family companion. His life revolves around his owner and he is finely tuned to moods and emotions. He gives unconditional love and in return asks only to be close by and to be included in as many activities as possible. If relegated to the backyard and excluded from family life he will not only be miserable but may also exhibit behavioural problems. He is an intelligent, strong-minded and independent dog and from the start will need to be kindly and firmly shown his position in the household if he is not to take over as ‘top dog’. He is a good watchdog and has a strong protective instinct. He will not rush into indiscriminate friendships, preferring to stand back and assess unknown visitors before approaching them to be petted. Cleanliness would seem to be second nature to the Shar Pei, not only is he a neat eater but he is also easy to house-train. Care must be taken when introducing him to other dogs as they are not well tolerated by many Shar Pei. It should be noted that the abundant loose skin and wrinkles of the puppy will disappear in adulthood as he grows into his skin and the folds will be confined to the head, neck and withers. The self-willed, self-confident, sometimes stubborn nature of the Shar Pei means that he is not recommended for novice owners.

The exercise requirements of the Shar Pei are moderate and he will almost exercise himself if a large garden is available to him. It is important however that he has a daily walk on-lead, both for his enjoyment and to keep him in shape physically. Walking will also provide interesting sights and smells to stimulate him mentally. As Shar Pei are sensitive to heat exercise should be undertaken in the cooler parts of the day and shade and fresh water should be available at all times.

As with all dogs basic obedience training is essential in order to make the Shar Pei a good family companion and a well-mannered, and therefore acceptable, member of the community. He is a clever dog and learns quickly what is required provided that training is carried out with kindness, firmness, fairness and consistency. To bring out the best in him reward-based positive methods should be used. Harshness and manhandling will achieve little but loss of respect, loss of trust and confusion. Shar Pei have competed successfully in high level obedience but, being smart, they bore easily when required to repeat exercises they already know. The key is to keep sessions short, fun and as varied as possible. Socialization should be started early with the puppy and should be an on-going activity. Introducing the dog to as many varied situations and people as possible will provide him with the skills he needs to cope in the human world and should prevent any tendency to be overly suspicious of strangers or over-protective, thus ensuring that he matures into a calm, temperamentally stable and confident adult.

Some photographs of the Shar Pei... 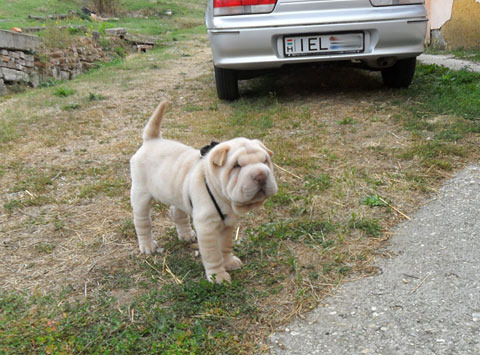 Here is my latest bundle of joy, Phanatic Hungary Georgina (age 12 weeks in this picture). Shar-Pei are one of the easiest breeds to train as they are naturally obedient. They are also very intuitive dogs who with gentle handling grow to understand their owners better than their owners understand themselves. They're an excellent choice for anyone wanting a dog who's a faithful friend, companion and confidante and always by your side when needed. 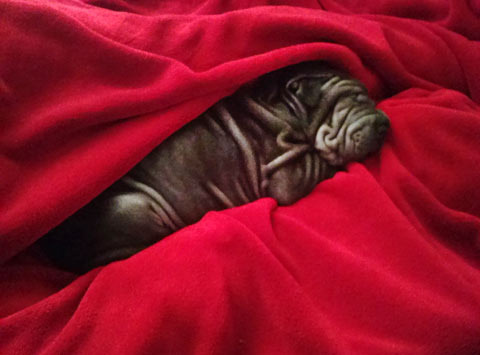 Missy is a playful pup (12 weeks old in this photograph), our kids adore her. She stays inside and will stand at the door when she needs to go do her business. She doesn't enter the boys room and guards the house when we go to church. We are happy to have her as part of our family. 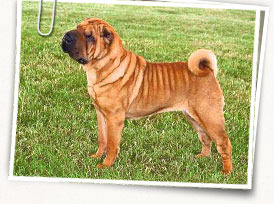 All solid colours except white

If you have any suggestions or if you think you’ve spotted an error, please let us know in our Shar Pei forum.