German in origin, the Schnauzers ancestors date back to the Middle Ages and dogs bearing a strong resemblance to Schnauzers can be seen depicted in artwork of that time including paintings by Lucas Cranach the Elder, Durer and Rembrandt. The Schnauzer (referred to by some as the Standard Schnauzer) was the first of the three Schnauzer breeds with both the Miniature and Giant Schnauzers evolving from this rugged little dog. The predecessor of the Schnauzer was the Wire Haired Pincher, a breed thought to have been developed from a number of breeds including the German Black Poodle and the Grey Wolf Spitz. Wire Haired Pinchers became known as Schnauzers after a dog called Schnauze (a name derived from the German word for muzzle/snout) won at the 1879 Hanover International Show. A versatile breed the Schnauzer has been valued over the years as a ratter, a hunter of small game, a guardian of property, family, and farm, and livestock guard and drover. In Germany they have been used as police dogs and served as messenger dogs during the World Wars. In many countries they now provide valuable service as assistance and therapy dogs, search and rescue dogs, and explosives detection dogs. These loyal affectionate dogs are now found mainly as companions, their playful disposition and sense of humour making then excellent and devoted family pets.

Love of, and devotion to, his family is the hallmark of the Schnauzer. If he is to thrive and develop the true fun-loving and faithful Schnauzer personality he must be welcomed as a valued member of the household. If he is consigned to the backyard and left alone for long periods of time he will feel rejected and miserable as he needs human contact and interaction and loves to included in family activities and to be wherever his owners may be. He will also get bored with his own company and may devise tedium-relieving diversions which may have unwanted results. It is wise to ensure that the garden is securely fenced as he is a keen hunter of rats and other rodents and may dig under a fence or squeeze through a gap in pursuit of his prize. The Schnauzer is generally good with children and will join in games enthusiastically but his boisterousness may be too much for toddlers, and any form of teasing will not go down well with him. The breed earned the name Kinder Watchers for their reliability as protectors of children and, as a guard dog and watchdog, the Schnauzer has few equals. Fearless in defence of his home and people he is always alert to what is going on around him and will warn of strangers or any untoward activities with a deep and formidable bark. He is an intelligent dog and needs firm leadership and direction from the outset as to acceptable behaviour and boundaries if he is not to end up being the head of the household. The Schnauzer is a fine house-dog and the ideal companion for an active owner.

This is generally a very healthy breed with plenty of energy. Once past the puppy stage the Schnauzer will benefit from lots of exercise and he requires a minimum of one good walk a day - preferably three brisk daily walks to keep him in peak physical condition. These walks and, if the opportunity presents, a supervised run in a secure area will help keep him mentally alert and happy. Activity is built in to him and in addition to play sessions, he will enjoy agility, obedience work, herding and tracking as well as accompanying his owner on hikes. The Schnauzer can also be trained to retrieve, both on land and in water, which will provide excellent exercise.

These quick-thinking, intelligent dogs have a high learning rate and require lots of mental stimulation. The Schnauzer has actually been described as the dog with the human brain and, while that is obviously an exaggeration, once a command is learned and understood it will not be forgotten. Commands will be carried out quickly and efficiently but, sometimes the application of the Schnauzers ability to think things out for himself may means that the execution of the command is done in the manner that seems most efficient to the dog rather than what the handler had in mind! Training should be conducted in short, interesting and varied sessions with no prolonged repetition of exercises which will inevitably bore the dog and cause it to dis-engage. Schnauzers are independent and can also be wilful but will not tolerate harsh training or severe reprimands. Positive reinforcement techniques should be used to get the best out of these clever little dogs. Care should be taken to ensure Schnauzers are well socialised when puppies to prevent mature dogs becoming overprotective. Introducing the puppy to as many various people, places, other dogs, noises and situations should ensure that he will grow to be a confident, well behaved and trustworthy adult.

Some photographs of the Schnauzer... 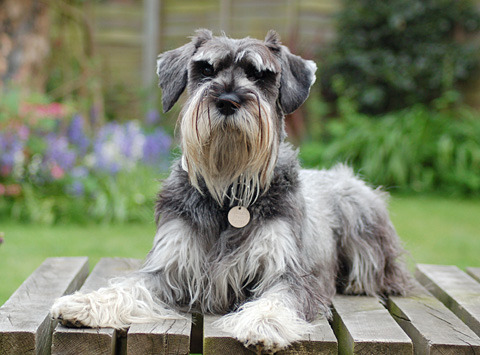 Here is a photo of Squiggle in our garden.

If you have any suggestions or if you think you’ve spotted an error, please let us know in our Schnauzer forum.