The Siberian Husky belongs to the ancient family of Arctic sled dogs. He originated in the extreme northeastern part of Siberia among the Chukchi people whose survival depended upon dogs of intelligence, courage, endurance and speed to provide transportation and to aid in hunting and trapping. Word of this light, fast, strong dog of almost inexhaustible stamina was spread by explorers who used them as sled dogs and in 1909 numbers were brought to Alaska to compete in long-distance races. They quickly became established in the U.S.A. both for work and for competition.

Unlike many of the Arctic breeds which received the minimum of human companionship, the Siberian Huskies were kept inside dwellings and in summer, when not required for work, were allowed to run free and hunt for themselves. The Chukchi believed that their dogs were the guardians of Heavens gates and that the manner in which you treated a dog in this life would determine your place in the next. The legacy of this combination of freedom and affection enjoyed by the Siberian Husky for centuries is evident in his friendliness toward people and his undiminished love of hunting, running, and being a member of a pack. He is not a one-man dog but is gregarious and sociable with all who cross his path, including complete strangers. He is, therefore, not suitable as a guard or watchdog although his appearance may serve as a deterrent. Generally friendly with other dogs (he will however retaliate quickly and very effectively if attacked ) his amiability does not extend towards other pet animals, wildlife or livestock. The Siberian has a very strong prey drive and is a clever, quick, and efficient hunter and killer. His desire to run far and fast and his unreliable response to recall mean that a secure exercise area with high fences which he cannot dig under or climb over is essential. Very much a pack animal he needs company, human and/or canine. Left alone he will be miserable and may well howl to express his dejection. This breed is not recommended for novice owners.

The exercise requirements of the Siberian Husky are considerable. For hundreds of years he has been bred to run ... and run ... and run, for mile upon mile, usually in a straight line. This is the reason that Husky experts advise that all exercise should be carried out on-lead or in a very secure, well-fenced area, or, best of all, harnessed to a sled or a wheeled rig. Daily on-lead walking, running, hiking, biking, also will keep him fit and happy in your company. Allowing free running exercise in an unenclosed environment poses the risk of the dog being lost, run over, or shot by a farmer. If you are unable or unwilling to provide a great deal of controlled exercise, including mentally stimulating activities, then the Siberian is not the right breed for you. To avoid crippling stress-related injury to developing bones and joints care must be taken not to over-exercise the growing pup.

Basic obedience training is important to gain the respect of the dog and to instil good manners. An agreeable and willing worker the Siberian will obey commands readily once he has understood their meaning. The exception to this is the recall. Once running or hunting he is very likely to become deaf to command. His intelligence, strong will and ability to make his own decisions may make training somewhat of a challenge but the use of positive reinforcement using food rewards will bring out the best in him. Harsh methods should never be used. Not only are these quite unnecessary but the Siberian may express his outrage with highly dramatic screams and howls and he will lose all trust and respect for those who handle him roughly. Siberian Huskies are rarely fazed by new situations, experiences, or people, but it is wise to thoroughly socialize the dog from an early age to ensure that he grows to be a confident, outgoing adult.

Some photographs of the Siberian Husky... 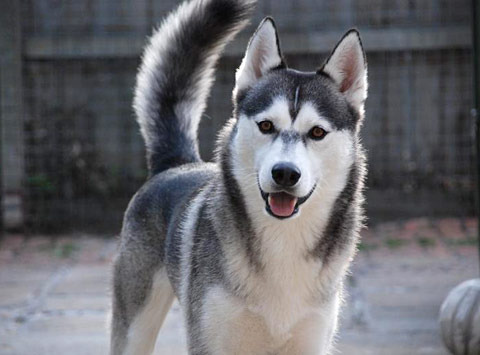 All colours and markings

If you have any suggestions or if you think you’ve spotted an error, please let us know in our Siberian Husky forum.