The Basset Fauve de Bretagne, also known as the Tawny Brittany Basset, is a native of Brittany in north-west France. The exact path of its development is a subject of conjecture, but it is almost certainly descended from the now extinct Grand Fauve de Bretagne. Hunting in pre-Revolutionary France was a privilege of the aristocracy and the Grands were large, fast hounds which accompanied mounted huntsmen. After the Revolution the right to hunt was extended to all citizens but most had not the means to keep horses and therefore needed smaller, slower dogs that could be followed on foot over moorland and other rough terrain. Whether only undersized pups from litters were kept and bred, or whether breeding from smaller and slower Grands was practised is unknown. It is also suggested that crossing with the Griffon Fauve de Bretagne and/or other short-legged hounds from the Vendee region occurred. After World War II the breed was all but extinct and it took the dedicated efforts of a few breeders to build up numbers to a reasonable level. This was achieved by gathering the some of the remaining animals and introducing blood from the Basset Griffon Vendeen and the Standard Wirehaired Dachshund. The breed is still quite rare and is seldom encountered outside France and Great Britain where it is becoming popular as a show and companion dog.

Charming and affectionate the Basset Fauve is a typical hound with the instinct to track, scent and flush game an inherent part of his make-up. It is important to ensure that any garden to which he has access is securely fenced as he will make a determined effort to follow anything of interest which catches his eye or his nose. His liveliness, combined with an amiable disposition, makes him a good companion for children and he will get along well with other animals if familiarized with them from a young age, but care should be taken with small pets such as rabbits which are a natural prey for a small-game hunter. Bred to work quite independently he has a mind of his own and needs an owner who is equally determined in character and can teach him, kindly and with consistency, what is expected of him in the way of good manners. As a pack worker he does best if given plenty of companionship, is included as a real and valued member of the family and allowed to join in as many activities as possible. Gregarious by nature and loving the wide open spaces it would be unfair, and psychologically damaging, to keep him confined for long hours in a crate or a kennel. As with many hounds he would not be the first choice as a watchdog but he will usually give a couple of barks if strangers approach the property. Although not a widely known breed the Basset Fauve is gradually and deservedly gaining in popularity.

The exercise requirements of the adult Fauve are considerable. He was developed to do a full day’s work in the field and an effort to replicate this should be made with at least two long walks each day. It is recommended that he should not be allowed off-lead on walks as his superb sense of smell may lead him to track for many miles and become lost. Similarly, if he spots or hears a rabbit or other wildlife he will be off like a shot and efforts to recall him from the chase are unlikely to be successful. However, if a secure area can be found he will enjoy the opportunity to explore and investigate at his own pace. He is an excellent hiking companion, tough and nimble enough to take rough going in his stride. Puppies do not need, and should not have, long walks as this can irreparably damage growing bones and joints. Jumping and running up and down stairs should also be avoided until the dog is mature.

If the Basset Fauve is to fit into the home and be acceptable to the general community he will need at least basic obedience training. As he can be a somewhat opinionated and determined character training needs to be undertaken with patience and consistency. Positive reinforcement methods with genuine praise and rewards for good work will be the most successful. Harsh handling and verbal abuse will result in the bond between dog and owner being weakened to the point that all trust disappears and any compliance with commands will be prompted by fear rather than the happy willingness with which he will respond if treated with respect and understanding. From a young puppy he needs to be socialized extensively. He should be exposed to as many varieties of people, places, sights, sound, situations and other animals as possible. This will ensure that he grows to be a confident, cheerful, well-mannered adult of sound temperament.

Some photographs of the Basset Fauve de Bretagne... 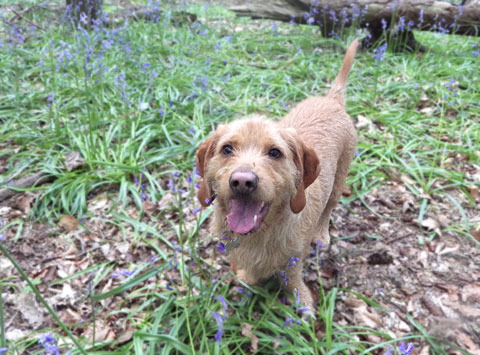 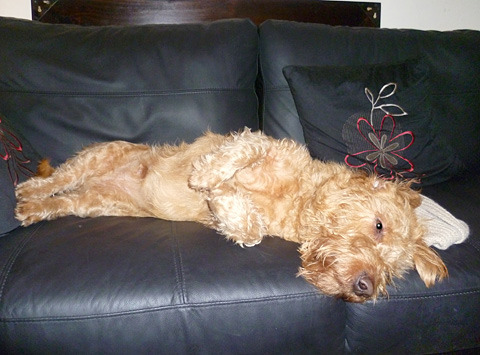 Here is my 3 year old Basset Fauve de Bretagne called Sasha. I had no knowledge of the Breed before I started researching for a new dog after I retired, but he's a wonderful companion, very intelligent, loving, loyal and constantly makes me smile; of course I cant let him off lead because of his Hound instincts.

If you have any suggestions or if you think you’ve spotted an error, please let us know in our Basset Fauve de Bretagne forum.