The Afghan Hound is also known by the names: Afghan, Kuchi Hound.

The Afghan Hound is one of the ancient breeds of coursing hounds originating in the Middle East and is believed to have made its way along the old trade routes with travellers from Persia to Afghanistan . Cave paintings found in Afghanistan depicting dogs of the type have been dated back to over 4,000 years. Possessed of great speed, great stamina, great agility, acute eyesight, and with a coat to withstand the extreme cold of their native hills, these Hounds have always been highly valued by both tribesmen and nobility as companions, guards and hunters. On a hunting expedition the Afghan accompanied a huntsman on horseback who carried a hawk. When an antelope, or other prey animal, was sighted the hawk was released to stoop towards the prey’s head distracting and delaying it sufficiently for the dog to mark it and make its run. Once the quarry was sighted the dog would give chase and run it to exhaustion enabling the following mounted huntsman to catch up and despatch it. High and wide-set hipbones enabled the Hound to follow every twist and turn of its prey over rocky, sloping and unforgiving terrain. It is maintained that the co-operation between Hound and hawk is so ingrained that many non-working Afghans today will still watch and attempt to follow the flight of a bird. Due to the reluctance of their native owners to part with these valuable dogs the Afghan Hound was not seen in the West until the early 20th century and was first recognized by the Kennel Club in 1926. In their homeland they still perform their traditional role but, in the West are better known as show dogs, companions and, unfortunately, as fashion accessories.

The epitome of elegance the Afghan is not the breed for everyone. While he may delight in being with his family and will demonstrate affection and great faithfulness he can sometimes be rather cat-like in his independence and dignity. He is certainly very aloof with strangers and has the disconcerting habit of looking straight though them as though they do not exist. His keen eyesight will discern the slightest movement and he is hard-wired to pursue anything at all that runs. Once he has embarked on the chase any attempt at recall will be difficult if not impossible. This should not be mistaken for stupidity or flagrant disobedience, chasing down prey is the purpose for which he has been bred for millennia and, while instinctual behaviours may be modified to some extent, they can never be eradicated. Fences must be secure and high enough to foil any attempt at taking off after cats, rabbits or other wildlife. His guarding background makes him a reliable watchdog who will alert to trespassers by barking. For all his apparently cool demeanour he thrives best in the company of his people and if deprived of interaction with them he will pine and probably express his loneliness by howling and may attempt to relieve his boredom by destructiveness. He should therefore be included in as many family activities as possible and be allowed a place in the home. With family and people he knows well his impassive gaze will light up with pleasure, gravitas is abandoned, and he becomes a lively, spirited and sometimes clownish companion. For those who can commit to the hours of grooming required to keep his magnificent coat in order and can accept his breed traits the Afghan will prove a devoted friend of striking appearance. This breed is not recommended for novice owners or for those with young children.

The Afghan Hound requires a great deal of exercise to keep him fit and mentally stimulated. Physically and psychologically he has been bred and developed to run fast and it is suggested that he should have at least thirty minutes free running a day. He loves open spaces and revels in the opportunity to stretch his legs at full speed. While there are few sights more glorious than a running Afghan it is important that any off-lead exercise is carried out in a secure area as the inherent drive to chase any prey that he sights is paramount and he may kill any small animal that he catches. An excellent outlet for his energies is the sport of sight-hound racing or lure coursing.

Afghans are not untrainable but their independent nature may make training a challenge as they have no great desire to please anyone other than themselves. Basic obedience training, which is essential for all breeds, should be undertaken with this in mind and should be carried out with patience and consistency. Reward-based methods which involve praise and treats for good work will bring out the best in the dog. Harsh verbal or physical corrections are unnecessary and should be avoided. At best they will result in stubborn resistance, at worst they may cause a defensive reaction or result in a dog with a broken spirit. Cautious and aloof by nature adequate socialization of the Afghan is important to ensure that these qualities do not develop into timidity or nervousness. From an early age the dog should be exposed to various people, sounds, situations and objects in order that he will mature into a confident, well-mannered adult of stable temperament.

Some photographs of the Afghan Hound... 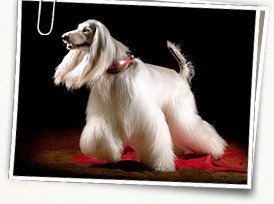 If you have any suggestions or if you think you’ve spotted an error, please let us know in our Afghan Hound forum.