The Akita is also known by the names: Akita Inu, Japanese Akita.

The Akita is one of the family of northern Spitz breeds and its development in Japan can be traced back to Akita Province in the 17th century. Large, brave and swift-moving dogs they were used for hunting deer, wild boar and bears, and were also useful retrievers of wildfowl and game. Their webbed feet made them effective when hunting over snow and they are also believed to have been used by fishermen to drive fish into the nets. Unfortunately their history in Japan is inextricably linked with the now prohibited 'sport' of dog-fighting. In the early part of the 20th century breed numbers seriously declined but the formation in 1927 of the Akitainu Hozankai Society saw the breed saved from the threat of extinction only to face the same fate during World War II when only a handful of dogs survived. Some of these were taken to the U.S.A. by returning servicemen and interest in the breed grew. Once owned only by the Japanese aristocracy Akitas are now widely kept as pets in Japan and their popularity continues to increase outside their homeland.

The overall impression of an Akita is a dog of considerable 'presence': powerful, dignified, alert and possessing a self-confident reserve. He is loyal and affectionate to his family but wary of strangers and will instinctively guard family and property from intruders. Even people to whom the dog has previously been introduced may be regarded as intruders when a family member is not present. Normally a quiet dog which has been bred for hundreds of years to hunt silently it is wise to heed any barking as this indicates something is amiss. His love of family means that the Akita will not be happy and will resort to destructive and nuisance behaviours to relieve his boredom and frustration if relegated to the backyard with minimal human contact. He needs to live inside and be accepted as a real and important member of the household and to be included in as many activities as possible. For all his size and poise he is a very sensitive dog. Environmental changes, tensions within the family or major alterations of routine will cause stress which may in turn trigger autoimmune diseases. Akitas tend to exhibit dominance over other dogs and can be dog-aggressive, especially with those of the same sex. They are also instinctive hunters and will regard cats, rabbits, wildlife and small dogs to be fair game. For both of these reasons they should not be allowed to run off-lead unless under very reliable verbal control. The complex personality of the Akita requires an owner who understands the breed and can provide strong leadership. This breed is not recommended for first time or novice owners.

The adult Akita requires a considerable amount of exercise to stay physically and mentally healthy. At the minimum, regular daily walks of about 90 minutes and a large, secure back garden where you can play 'fetch' and other games with your dog are needed. If you can add such things as hiking, swimming, snow sports, etc. all the better. Vigorous exercise for young puppies should be avoided. Bones and joints will continue to develop until the dog is around eighteen months old and over-exercising heightens the risk of permanent damage.

The Akita has a tendency to want to be in charge and may challenge his owner for this position. It is therefore important that respect for his owner and the habit of compliance with commands is instilled from an early age. Obedience training will help to achieve this and will also strengthen the owner-dog bond. Intelligent and strong-willed an Akita can be a challenge to train as they become quickly bored with repetitive and, what appears to them to be, pointless exercises. Short, fun, training sessions are recommended using positive reinforcement in the form of treats and/or enthusiastic praise. Harsh verbal or physical methods are self-defeating. The bond of trust will be undermined and aggression on the part of the handler may be met with aggression from the dog. Firm, fair, patient and consistent handling will accomplish far more. Socialization from a young age is vital in order that the pup grows into a confident and well-rounded adult. Puppies should be taken out and about as soon as possible to meet a variety of people and animals, and to experience various situations.

Some photographs of the Akita... 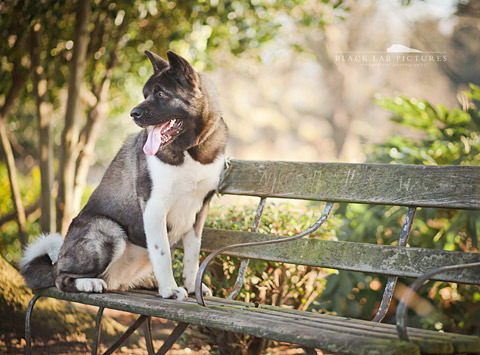 Flora has done very well in the show ring, being placed at every Championship and Open show she has entered - taking many Best of Breed and Group placings. She's also a Blue Cross Education dog, representing them and the Akita Association at Crufts, Discover Dogs and the London Pet Show. Flora has passed many examinations and is now working towards her KC Good Citizen Gold. Currently "Britain's Next Dog Model 2013", she has also appeared on Britain's Top Dog Model (ITV), The One Show (BBC) and SuperScrimpers (CH4). For more info and photos, see Flora's thread in our forum. 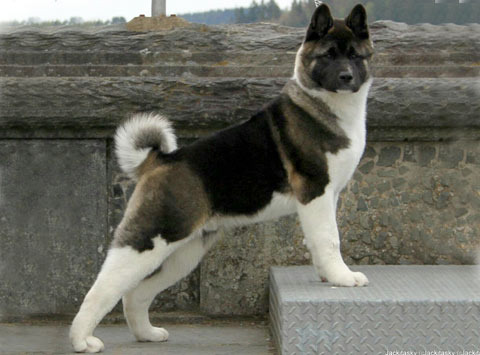 Sharn was made up to a Champion last year and we are very proud because she is our first home bred girl to achieve champion status.

Akita in main photograph: Flora (Melodor We Are The Borg) owned by Robert Stuhldreer, Islington, London UK. See Flora's photo in the photos section for her numerous accolades. Akita in thumbnail image on listing pages: Flora. 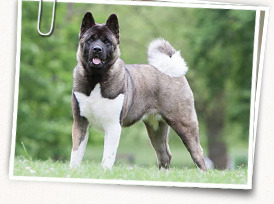 Any colour including white, brindle, pinto (white with irregular black patches), with or without mask

If you have any suggestions or if you think you’ve spotted an error, please let us know in our Akita forum.