The Alaskan Malamute is also known by the names: Mal, Malamute, Mally.

One of the oldest, and the largest, of the Arctic sled dogs the breed is named for the native Mahlemut tribe which inhabited the upper western area of Alaska. The Mahlemuts developed the dogs for the purpose of hauling heavy sleds and packing supplies over long distances, hunting seals, and tracking and hunting in packs the polar bear. Primarily draught animals they were bred for great strength, courage, and the ability to survive and endure hard work in inhospitable conditions.

Very loving and affectionate towards people, their innate friendliness makes them less than successful as guard or watchdogs. Unfortunately this benevolence does not usually extend towards other canines, particularly canines of the same sex. Many Malamutes will readily take up or issue a challenge, both to prove their superiority and for the sheer pleasure of brawling. The Malamute will live outside quite happily, but it is important for the mental well-being of the dog that it should have extended periods of interaction with its human family. It should also be noted that they have an inbuilt instinct to dig and they may excavate large dens in the garden to provide winter warmth and coolness in the summer. They are not excessive barkers but they do vocalise with various 'talking' sounds. Their instinct to hunt and their tendency to run miles in a straight line mean that off-lead exercise should be carried out only in a secure area. An independent, confident, dominant, tremendously powerful and spirited dog, this is not a breed for the faint-hearted.

At least one hour of vigorous exercise per day is the recommended minimum for an adult of this breed. Bred to work for long periods and to use their minds a lack of physical exercise and mental stimulation will result in an unfit and bored dog who may turn to destructiveness to relieve his frustrations. Care should be taken not to over-exercise in hot weather.

Malamutes can be trained to the highest levels of obedience, but this excellence is achieved only if you have the respect of the dog. This respect cannot be enforced by brow-beating or other heavy-handed methods but only through fair, consistent, and firm but kind handling. Food rewards and praise will achieve far more than shouting and other negative methods. Confident in their own decision-making abilities training may be quite a challenge. To counter any aggressive tendencies it is imperative that the Malamute should be socialized with other dogs from a very early age and this socialization should be constant and on-going.

Some photographs of the Alaskan Malamute... 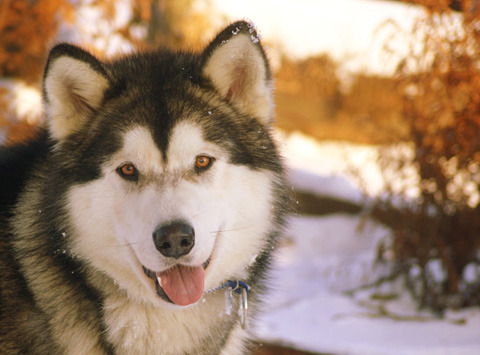 This is a photo of Ice, at 3 years old out and about in the snow. 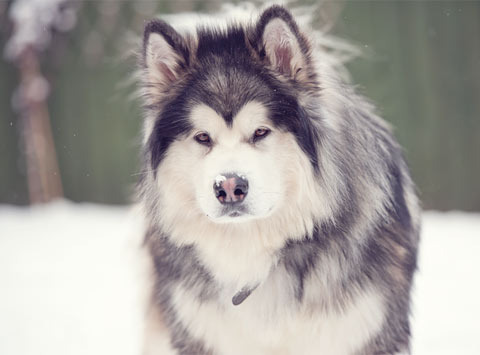 Here's my best mate Atlas enjoying himself in the snow. For more info and photos, see Atlas's thread in our forum. 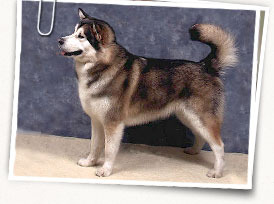 Light grey through to black or gold through to liver. The underbody is always white. The only acceptable solid colour is white.

If you have any suggestions or if you think you’ve spotted an error, please let us know in our Alaskan Malamute forum.