The Australian Cattle Dog, also known as the Blue, Red, Australian, or Queensland Blue, Heeler, is inextricably linked with the Australian Outback and the development of the Australian cattle industry. The early British settlers discovered that the working dogs which had accompanied them were unable to cope with the harsh environment, the vast distances over which cattle roamed, and the refractory beasts themselves. They needed a dog that could work all day in extremes of climate; was amenable to training; was easy to maintain; was unafraid of obstreperous, semi-feral cattle; had a strong bite; was intelligent and loyal; would tolerate horses; would work silently; and would protect home, people and herds. As no such canine paragon existed they set out to create one. The first steps were taken in 1830 with the crossing of British Smithfields with the indigenous Dingo, the offspring of which were known as Timmins Biters. In 1840 the Biters were crossed with blue merle Smooth Collies and more Dingo which produced dogs known as Hall’s Heelers. In the 1870s the Bagust brothers added some Dalmatian and Australian Kelpie blood and, after years of selective breeding and rigorous culling, breeding to type was achieved and Australia had its own unrivalled cattle dog. The name ‘heeler’ comes from the dog’s method of working: running in behind a beast, nipping it on the heel to make it move, and then dropping flat to avoid the inevitable kickback. The Breed Standard for the ACD was first drafted in 1893 and endorsed in 1903 by the New South Wales Kennel Club.

The Australian Cattle Dog epitomizes the characteristics associated with the Outback and its vast cattle stations. He is rugged, tough, dependable, uncomplaining, a good mate and a hard worker. Bred to work tirelessly for hours in unrelenting heat and dust or in the bitter cold he has incredible endurance and vast amounts of energy. If the ACD is not kept as a worker his energy needs to be channelled into acceptable pursuits otherwise he will become bored and seek to make his own entertainment - which is quite likely to be destructive. He will develop a strong bond of loyalty to his owner and, although he is physically able to cope with life outside, his satisfaction lies in being with his people as much as possible. Failure to provide the ACD with adequate company and interaction can lead to severe personality and behavioural problems. With strangers he tends to be rather aloof. He is a good watchdog and if necessary will fiercely defend his family and property from any perceived threat. Strong-willed , resourceful and of quite astonishing intelligence he needs an owner who can kindly but firmly help him to understand his position in the household and the rules by which he is to live. The ACD is generally good with older, considerate children but he is not the best playmate for youngsters whose running around may trigger the droving and ‘heeling’ instinct. He can be rather dominant with other dogs but although he is not particularly aggressive he will not back down if challenged. This is a popular companion breed in Australia but the Cattle Dog is not well suited to a suburban lifestyle and is not recommended for novice owners. He can be a swiftly reactive dog and features high on the Australian list of breeds involved in attacks on people, possibly due to owners' lack of understanding of the ACD’s singular character and failure to provide suitable outlets for his deep-rooted working instincts. For those that can offer almost constant companionship, lots of activity and space, the requisite leadership, socialization, and training, this true blue Aussie will prove to be a most devoted and rewarding partner.

It is documented that the oldest dog on record, a 29 year old Australian Cattle Dog, worked cattle for 20 of those years and if any fit, adult ACD could speak he would probably say there is no such thing as too much exercise. He needs long walks at least twice a day and, if possible, the opportunity to run off-lead in a safe area plus a very large backyard in which to play. Active and agile he is a good running, hiking, or biking companion. He loves ball games and activities which stimulate his brain. He excels in sports such as Frisbee, flyball, agility and obedience, all of which will keep him physically fit and mentally alert. Care should be taken not to over-exercise the young pup.

This must be one of the easiest and most satisfying breeds to train. He is smart, eager to please, quick to learn and fast to carry out commands once he understands what is required. Basic obedience training should be commenced as early as possible in order that he should be pleasant to live with, manageable, and acceptable to the community. All training should be carried out using positive reinforcement with treats and praise as rewards for accomplishments. Harsh physical and verbal corrections will serve no purpose, other than to cause resentment and a breakdown in trust and respect, and such methods will slow the learning process and bewilder the dog to the extent that he may ‘close down’ and refuse to do anything for fear of making a mistake. With patience, kindness, and benign firmness the Australian Cattle Dog can be trained to the very highest levels of competition obedience. It is of great importance that the process of socialization should be started when he is a young pup. By introducing him to various people, situations and other dogs the chance that he will become aggressively protective or territorial will be reduced. The well trained, well socialized Australian Cattle Dog is a joy to own and a delight to know.

Some photographs of the Australian Cattle Dog... 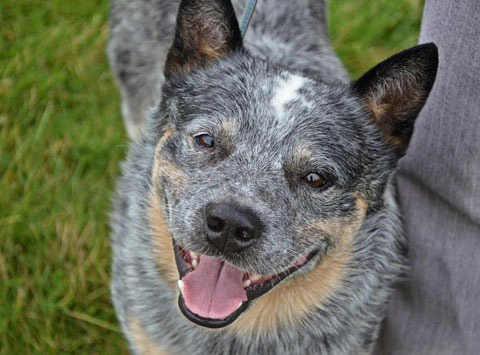 Willis is a UK Champion now on a mission to obtain his International title. He is a family dog who is usually quite stinky when not in the ring. His best mate is his big bruv Mackie our Rott boy. 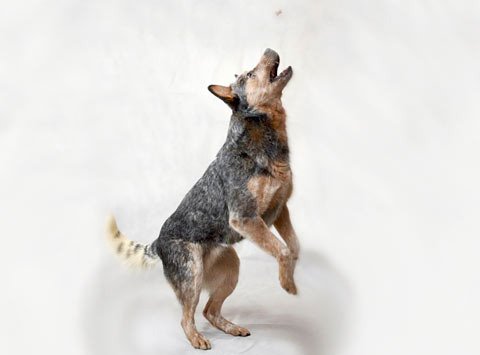 Mirrhi or Muppet as she is affectionately known is a loyal loving dog. She is a kleptomaniac and we are always amazed what we find in her stash. She has a new job now which is being a doggy nanny to my great nephew who is a few weeks old. Please move away from the baby !!! 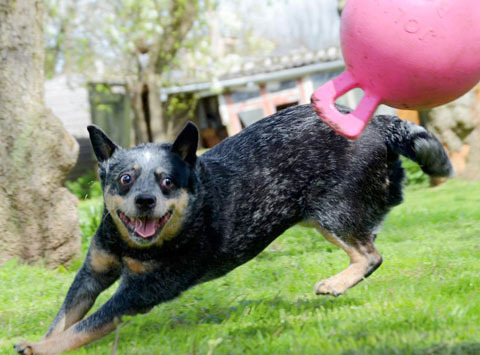 Brody is our fun police, all the toys in the box belong to her. She is a TV addict and loves certain adverts and recognises the theme tunes. Never a dull moment with Brody. 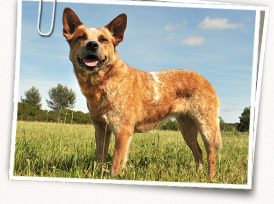 If you have any suggestions or if you think you’ve spotted an error, please let us know in our Australian Cattle Dog forum.