The exact origins of this ancient breed is lost in time, but for millennia it has served the Tuareg and other nomadic tribes of the Central African countries of Mali, Niger, and Burkina Faso as hunter, guard, companion and status symbol. The Azawakh (pronounced ‘Oz-a-wok’ and translating as ‘land of the north’), takes its name from the Azawakh Valley in the Sahel region of the Sahara desert. Also known as the Tuareg Sloughi the Azawakh was, and continues to be, prized for its beauty, speed, hunting prowess, fierce guarding instinct and loyalty to its owner. Developed to course gazelle and hare Azawakh can reach speed of 40 mph (65 km/h) but the hunt has become a rare and illegal pursuit in much of its native land and the nomadic Tuareg have largely settled to a sedentary farming way of life. The dogs however still fulfill their role as companions and guards against intruders or predators. They are held in such esteem that they are almost never sold, only given as gifts to honour a highly regarded visitor. It was as a gift to a Yugoslavian diplomat that the first Azawakh appeared outside of Africa in the 1970s. The physical perfection of these dogs is due to the rigorous selection process practised by the Taureg. As working animals only the fittest for the task were permitted to survive and breed and only the most promising one or two pups from a litter were reared. Never numerous, in either its homeland or in the west, the Azawakh is rightly recognized as a rare breed.

With only a few generations separating this breed from the traditional nomadic life there exists within the Azawakh a dichotomy - the desire to please versus the desire for autonomy. Proud in both bearing and nature his independent spirit requires understanding and firm, fair handling. He offers total loyalty to his master and can be an affectionate family companion but he is extremely suspicious and distrustful of strangers. He is a consummate guard, very territorial and will bark ferociously at any ‘intruder’ and may even be “savage” according to the FCI Breed Standard but, if correctly socialized, his natural wariness with visitors is more likely to be expressed by careful observation and haughty indifference to any friendly overtures. As with all breeds temperaments may vary according to lines and some Azawakh have been very successful in the role of therapy dogs. Given the close bonding with his family the Azawakh needs to be accorded the status of valued household member and is not suited, either physically or psychologically, to life outside in a kennel. A native of the desert he loathes cold, wet, weather and if relegated to the backyard he will become miserable and will find destructive outlets to relieve his boredom. Similarly, his origins mean that he likes open spaces so being shut in a crate for hours is unacceptable. It must be remembered that this dog has been bred for centuries as a hunter and the instinct to chase and bring down prey is still very close to the surface. Great care must therefore be taken with cats, wildlife, birds, small dogs and other small pets and the garden should be securely fenced to prevent him escaping in pursuit of tempting quarry. This austerely beautiful “idi n’illeli” (hound of the free people) is not recommended for inexperienced owners or for families with young children.

As with all sight-hounds adequate exercise of the Azawakh is an important consideration. Developed to travel with nomadic tribesmen and to hunt swift prey he needs at least half an hour of vigorous exercise, running or play, every day. He will be quite happy to intersperse periods of activity with long naps on a comfortable couch but a sizeable garden to play and potter around in is a necessity. His endurance and energy make him a good hiking and jogging companion but unless his recall is very reliable he should always be on lead lest he spot potential prey and is driven to chase. Lure coursing is a sport he will enjoy and at which he will excel. His natural elegance and fluency of movement make him a most graceful partner in the sports of canine freestyle and heelwork to music.

The Azawakh should receive at least basic obedience training in order that he becomes a pleasant companion and an acceptable member of the community. He is not a particularly difficult dog to train despite his independent nature. He is intelligent and willing to please a respected owner, but this respect must be earned by kind, firm, fair and consistent training methods. He will not respond well to harsh handling, either physical or vocal. Such treatment will result either in a broken spirit or in reciprocal aggression. If there is mutual respect he will always do his best to understand and obey. Socialization is of great importance. From an early age he should be exposed to various people, places, and situations in order that he grows to be a well-mannered, confident adult. Failure to adequately socialize may result in a dog that is nervous, timid, or over-protective and aggressive.

Some photographs of the Azawakh... 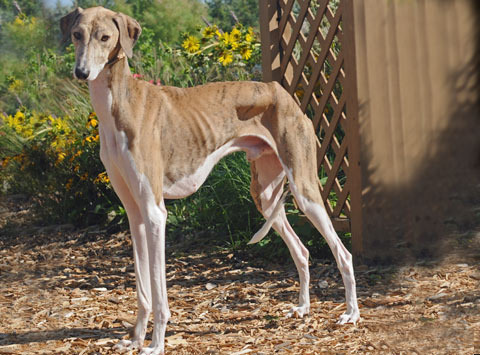 Amajar Ak Domiko is currently the number one male in the USA (2013). He is a Grand Seiger winner at the International Shows in the USA. 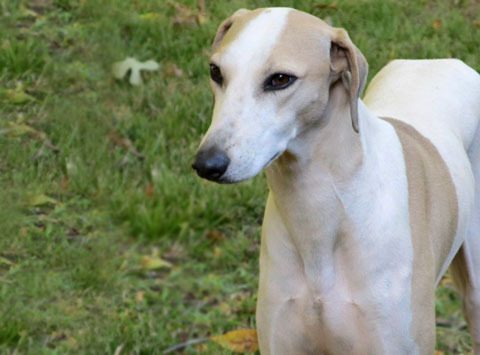 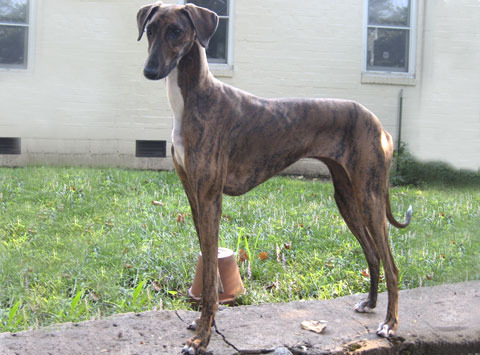 All shades of fawn and black brindle with white chest, stockings, tail tip. May or may not have black mask

If you have any suggestions or if you think you’ve spotted an error, please let us know in our Azawakh forum.