The Basenji is a native of Central Africa and is of such ancient lineage that it is regarded as one of the oldest pure breeds of dog extant. prick-eared, ring-tailed dogs which bear a marked resemblance to the Basenji of today are depicted on Egyptian artefacts dating back thousands of years and their history is claimed to be traceable to the Stone Age. These dogs first came to the notice of the Western world in the late 1890s when they were discovered living with tribesmen in the Congo (Zaire). They were valued in tribal society for their courage, intelligence and hunting skills. Working silently, either alone or in a pack with little need for human direction, their role of scenting, tracking and driving prey into the hunters nets was vital in providing sustenance for the tribe. Basenji continue to fulfill their traditional tasks in Africa where they are also known as 'the jumping up and down dog', a reference to manner in which they effortlessly leap high above the tall elephant grass to look around and test the air for scent of prey. The first dogs imported into Britain had no defence against local diseases and quickly succumbed to distemper. It was not until 1937 that a successful breeding program was established and the breed quickly grew to become popular show and companion dogs.

The one thing that most people associate with the Basenji is that he is a barkless dog, however, while he is physically incapable of barking, he is far from mute. He has the full range of whines, whimpers and growls found in any other domestic canine, plus some idiosyncratic vocalizations best described as chuckles, yodels, ululations and screams. The behaviours and instincts which fitted him for survival in Africa are very close to the surface and may present a challenge in a domestic situation. He is resourceful, intelligent, energetic, independent and inquisitive, and above all a hunter. His hunting instincts, his curiosity and tendency to wander make a securely fenced garden essential. He will easily jump low barriers and will have no trouble climbing chain-link fencing in pursuit of whatever has interested him. Developed to live and work with humans he is an affectionate and friendly dog who requires the time and attention of his people if he is to be truly happy. If kennelled and deprived of human interaction he will make his own, generally destructive, amusement and will never reach his potential as an excellent family companion. He tends to be rather reserved or aloof with strangers and, while not in the mould of the traditional guard dog, he is always alert and will indicate by vocalization or action if any unknown person is about. As a house-dog he has the positive qualities of being very clean - almost cat-like in his self-grooming behaviour, and he has no 'doggy' odour. He is generally good with children enjoying being included in their games, but may be a little too boisterous for toddlers. Basenji bitches reflect the closeness of this breed to the 'primitive' canines by having only one oestrus cycle a year. For those who want a compact, high-energy, playful, sometimes mischievous but always happy and loyal companion a Basenji could well be the answer.

The Basenji seems to have an almost inexhaustible supply of energy, always ready for a game, a walk, or anything else that he is invited to participate in. Vigorous daily exercise is necessary if he is not to become overweight and lazy. Brisk daily walks and the opportunity for free-running and exploration off-lead in a secure area will keep him both physically and mentally fit. As with many hunting breeds it is important that he is exercised on-lead everywhere except well-fenced areas. His hunting instinct is so strong that he is likely to chase anything that moves and he will become deaf to all efforts to recall him. Good outlets for his energies are the sports of lure coursing and agility. He can also excel at tracking as he has a superb sense of smell and this sport will provide exercise for his mind as well as his body.

While the Basenji can be trained to the highest levels of obedience his heritage of millennia of independent thinking and the confidence that his way is the right way can make training a challenging undertaking. He is quick to learn but may be slow to carry out commands if he sees no point in them or has something more interesting to do. The essential qualities required by the owner are patience, kindness, firmness, consistency and a sense of humour. Harsh verbal or physical methods are totally pointless and counterproductive as these will serve only to confuse the dog and may even elicit an aggressive response. The Basenji will respond best to positive reinforcement of good behaviour and to training sessions that are short and varied to prevent boredom. Socialization, which is the process of introducing and accustoming the dog to as many sights, sounds and people as possible, is of great importance and should be commenced from an early age. The adequately socialized pup will grow to be a well- mannered, well-adjusted, confident and friendly adult who will be a good ambassador for his breed.

Some photographs of the Basenji... 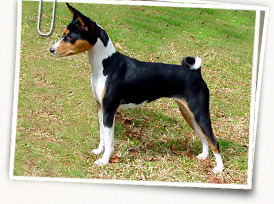 If you have any suggestions or if you think you’ve spotted an error, please let us know in our Basenji forum.