The Basset Bleu de Gascogne originated in the Basque region of Gascogne, France. References exist from over 800 years ago to the large blue hounds of France used to hunt wolves, boar and deer. It is from these hounds that the Bassets Bleu are descended. While some suggest that the short stature of the breed was the result of a crossing of the Grand Bleu with the Saintongeois Basset others hold that it occurred as a natural mutation in the Grand Bleu, the feature then being perpetuated by selective breeding in order to produce a dog which would hunt at a slower speed. Prior to the French Revolution hunting had been the preserve of the nobility, mounted and following packs of large, fast hounds. When the ordinary citizenry were permitted to participate they needed a scent-hound that they could follow on foot and the short-legged Bassets Bleu filled the niche. In recent times the decrease in the popularity of hunting with packs saw the breed become almost extinct. The efforts of the breeder Alain Bourbon rescued them from the brink but they are still rare outside France. The blue colour may have developed as a genetic response to protect the dog from the bright sunlight of the Midi region and the pendulous ears serve to stir up and gather scent to the nose when head down and tracking. In the UK the Bleu is seldom encountered at conformation shows and is relatively unknown as a companion dog.

This is a sociable, affectionate dog of generally very stable temperament. He will bond closely with his people and needs to be treated as one of the family and included in as many activities as practicable. He is not suited to a life of minimal human contact as, if relegated to a lonely existence in the backyard, he will become miserable and bored and consequently behavioural problems will result. He is good with children and will enter into their games with enthusiastic high-spirits. He is not a natural watchdog but he will usually alert to strangers by barking. Developed to work in a pack to hunt mainly rabbit and hare he is usually neither shy nor aggressive with other dogs but care should be taken with other small pets. The ‘music’ of the Basset Bleu is something that should be taken into account by anyone considering this breed. He has a deep, rich, far-carrying voice, described by one source as “a beautiful howling voice” but this glorious vocalization may not be wholly appreciated by all. He is also an intent and instinctive hunter and will track for miles once on the scent of potential quarry. It is therefore essential that gardens should be very secure as, once on the trail, he can easily become lost and unable to find his way back. Basically however he is a sagacious and sensible dog and a fine, gentle companion for those who understand and can accommodate the hard-wired hound instincts.

Bred to walk for hours and miles on the hunt the adult Basset Bleu requires considerable exercise - two long walks each day as the minimum. Puppies should not be formally walked very far as this may cause long-term damage to bones and joints, nor should they be allowed to jump or run up and down stairs. Being a scent-hound it is unwise to allow off-lead exercise lest he become engaged on a trail and disappear, deaf to all recall commands. However, if a secure area can be found he will appreciate the opportunity to explore and investigate every exciting smell. This will provide him with mental stimulation which is as important as his physical well-being. He can excel at the sport of tracking and, despite being low-slung, he is quite athletic and would be an excellent hiking partner.

Basic obedience training is necessary to ensure that he is a pleasant addition to the home and acceptable to the general community. As with many scent- and sight-hounds the Basset Bleu can become easily distracted and it is up to the owner to make him/herself rather more interesting than a blade of grass or a blowing leaf. While this may present a challenge it is by no means impossible. All training should be based on positive reinforcement methods and there must be mutual respect between dog and owner. Harsh verbal or physical methods will achieve nothing except a dog that is confused and which may ‘shut down’ for fear of doing the wrong thing. The Basset Bleu is intelligent and will be quick to respond once he understands what is required of him and once he knows that compliance carries with it a reward. Socialization from a young age is equally important. Exposing the puppy to as many as possible of the various people, sights, sounds, places he may encounter during his life will ensure that he grows to be a well-mannered, well-adjusted and confident adult.

Some photographs of the Basset Bleu de Gascogne... 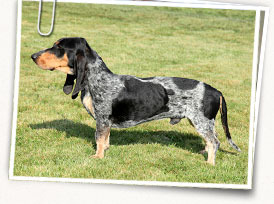 If you have any suggestions or if you think you’ve spotted an error, please let us know in our Basset Bleu de Gascogne forum.