The Bernese, one of the four breeds known as the Swiss Sennenhunde, was developed in the Berne region of Switzerland from the large mastiff-type dogs brought over the Alps by the Romans around 2000 years ago. The merchants of Berne used them as draught animals to pull small carts, and farmers of the area employed them for both draughting and the droving of cattle. Nearly extinct by the end of the 1800s the breed was saved by the establishment of a dedicated breeding program initiated by Franz Schertenleib in 1892.

If total devotion in one large, beautiful package is required then it would be difficult to go past the Bernese. Renowned for its gentle nature, impeccable good manners, and loving loyalty this is very much a ‘people’ dog. Needing close human interaction Bernese will not thrive if relegated to a kennel or backyard and will be dispirited, and possibly destructive, if left alone for long periods of time. This does not mean that they are overly needy dogs, constantly demanding attention, but they will be happiest knowing that you are close by. Their friendly nature means that they are not the best guard dogs, but they will certainly alert you to strangers approaching your property. As a breed the Bernese is generally slow to mature and will remain boisterous and puppy-like for quite a while. Unfortunately they tend not to be long-lived. As a Swiss expression puts it: “Three years a young dog, three years a good dog and three years an old dog. All else is a gift from God”.

As with all very large breeds extreme care must be taken not to over-exercise the growing dog. The adult dog will need a moderate amount of regular exercise, up to 5 miles walking daily and the opportunity to play and run in a secure area.

Bernese are always willing to please and are great fans of food, so they are generally very amenable to training methods which use positive reinforcement. They can be trained for competition obedience, carting, and agility. Being a large and powerful dog training to walk on lead without pulling is important and jumping up on people should be discouraged from a young age. As with any breed, correct and extensive socialization is required from the outset.

Some photographs of the Bernese Mountain Dog... 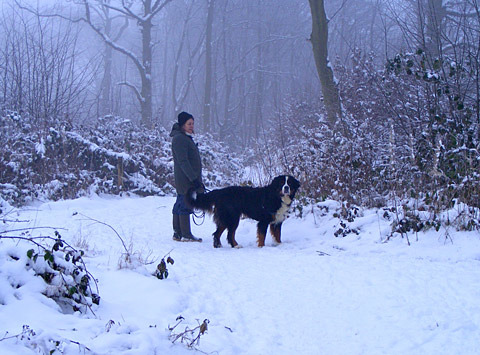 Dillon is a male Bernese Mountain Dog who has just turned a year old in this picture. He has a lot of energy and can be very naughty but loveable. 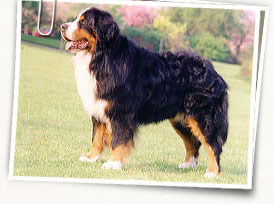 If you have any suggestions or if you think you’ve spotted an error, please let us know in our Bernese Mountain Dog forum.