The Borzoi originated in Russia and is still known in some countries as the Russian Wolfhound. It is suggested that the breed may have descended from crosses between the Saluki or Sloughi and Greyhounds of ancient Egypt and a now extinct long-haired Russian sheepdog. The name Borzoi means ‘swift’ and was a general term used in Russia for all the sight-hounds which now have their own distinct breed names. Borzoi were an essential part of the great hunts enjoyed by the Russian aristocracy. Their primary quarry was the wolf which they coursed in pairs. Although a brace of Borzoi was quite capable of killing a wolf it was a tradition for the huntsman to despatch the quarry with a knife so the dogs would pull the wolf down and hold it until the hunter arrived. The Imperial Borzoi kennels of the Tsars was founded in 1613 and the breed remained the property and symbol of the nobility until the 1917 Revolution when most Borzoi were killed. The breed first appeared outside Russia in the late 19th century as gifts to British royalty, an association which ensured their popularity sometimes, unfortunately, as nothing more than a fashion accessory. The modern Breed Standard is closely based on the original which was drawn up in Russia in 1650. This would indicate that the Borzoi is little changed from the ancestors that pursued and brought down wolves on the steppes of Russia.

The epitome of refinement, graceful in motion, elegant in repose the Borzoi is a fine companion for those who can understand the nature of a hound. With his family he is very loyal and is affectionate without being fawning. Despite his great size he is a neat and quiet housedog who seldom barks without good reason. He is a good watchdog keenly alert to all that is going on but, being a hound, he does not have a highly developed protective instinct. However, beneath that dignified, decorous exterior lies all the courage of his forebears which stands him in good stead in the face of a challenge. Although never timid he is very sensitive and requires equally sensitive handling. He does not respond well to harshness and although he is gentle with children if he is raised with them he does not take kindly to teasing and rough handling. With strangers he tend to be rather aloof, all his devotion is reserved for his family and he needs to be treated as a valued member of that family as he is not emotionally equipped to be deprived of company for long periods. It must be remembered that the Borzoi is a hunting dog and gardens need to be very securely fenced to prevent him escaping after some small animal that he may have spotted. He is also a prodigious jumper and a 4 foot fence will present no problem to him as Borzoi have cleared jumps of over 5 feet in height. While he is not the dog for everyone, and should never be purchased on the strength of his looks alone, an understanding and loving owner will gain the reward of the fidelity and respect of a true aristocrat of the canine world.

The adult Borzoi requires a considerable amount of exercise. One long walk on lead every day plus the opportunity to free run once a week is the absolute minium necessary to keep him fit and mentally healthy. Breed experts are of the opinion that Borzoi will become neurotic and very unhappy if they are not given the opportunity to run as this is what they have been bred for over centuries. If safe, free running is not able to be provided then, in the interests of the dog, a different choice of breed should be considered. All off-lead exercise should be undertaken with the thought uppermost in mind that this is a coursing breed liable to take off at the sight of any running animal - wildlife, cats, livestock, small dogs etc. and that it is possible that the ‘prey’ may be brought to ground and killed. Lure coursing is an excellent way to provide the necessary exercise in a safe environment. Borzoi can also excel in obedience trials and in agility. Care should be taken not to over-exercise puppies lest lasting damage is done to immature bones and joints.

For all his slender and delicate appearance the Borzoi is a strong, powerful dog with a mind of his own. Basic obedience training should commence at a young age in order that the dog is controllable and responsive to commands. He is very intelligent and highly trainable but in no way servile. Training should be regarded as teamwork based on mutual respect - he works with you rather than for you. Positive reinforcement which rewards learning and effort with treats and/or praise will accomplish far more than physical or verbal corrections and reprimands. A Borzoi trained with sensitivity, patience and consistency will work happily and with pride and is capable of achieving success at the highest levels of obedience competition. Socialization, the process of introducing and accustoming the dog to a variety of people and situations, should be started as early as possible. The well-socialized pup will grow to be a calm, confident adult, a pleasure to own and a fine ambassador for his breed.

Some photographs of the Borzoi... 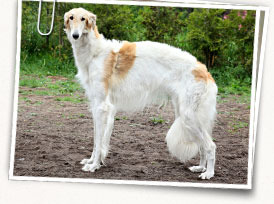 If you have any suggestions or if you think you’ve spotted an error, please let us know in our Borzoi forum.