The Canadian Eskimo Dog is also known by the names: Canadian Inuit Dog.

It is believed that around 1100-1200 AD the Thule Inuit migrated throughout Canada’s Arctic Region bringing with them the first Canadian Eskimo Dogs. Versatile and extremely hardy the dogs were used for pulling sleds, packing, locating the breathing holes of seals, and protecting their masters by attacking and holding at bay musk oxen and polar bears. During the late 1800s and early 1900s their ability to work and survive in the harshest of conditions made them the preferred sled dog of explorers. As traditional methods of transportation declined so too did the population of pure CEDs. In 1972 a breeding program was established to save the breed and to boost numbers which had fallen to approximately 200 purebreds. The program has saved the breed from complete extinction but numbers are still very low. First recognized by the Kennel Club 2001.

It should be understood that the CED is very much a pack animal, and one with an independent nature, abundant energy, and an enthusiasm for all activities from eating to skirmishing. They are generally good-tempered with people but may be less so with other dogs. The harsh conditions of their land of origin makes inevitable a concomitant imperative to survive and this may lead to stealing of food and chasing and killing prey animals. Their strong drives and almost inexhaustible ability to run and chase make secure fencing essential and off-lead running, unless in a secure area, unwise. According to the Norwegian explorer Otto Sverdrup the Canadian Eskimo Dogs have "the persistence and tenacity of the wild animal, the domestic dog's admirable devotion to their master; they are the wildest breath of nature, the warmest breath of civilisation." This breed is not recommended for first time owners, nor for those lacking experience in the care and management of the primitive Northern breeds.

The exercise requirements of this highly energetic breed are considerable. Unless they receive adequate physical exercise and mental stimulation they will become bored, unfit, and almost certainly destructive. Among the outdoor activities which will keep the CED healthy in body and mind are sled pulling, weight pull, hiking, backpacking, etc. Caution is needed in respect to weather conditions as exercise in hot weather may result in dehydration and heat exhaustion. As with all large breeds care must be taken not to over-exercise the growing dog.

For a well-rounded, socially acceptable canine it is essential that the CED receives plenty of socialization from a young age. Obedience training is also important as the breed has a natural requirement for a stable pack structure with a firm but fair and totally trustworthy leader. The use of positive reinforcement and plenty of encouragement is the best way to achieve the desired results.

Some photographs of the Canadian Eskimo Dog... 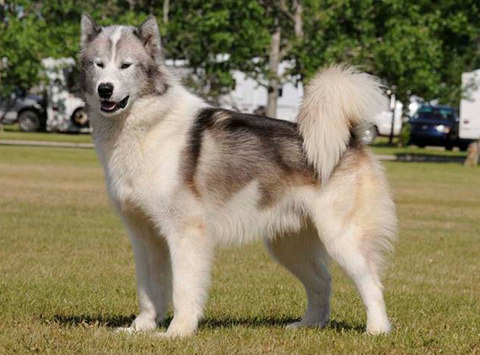 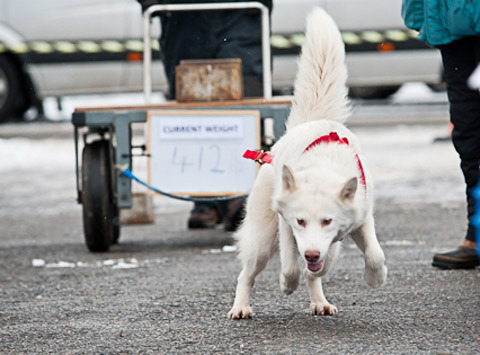 Arcticice Qimmiq Anana @ Akna (Aurora) was imported from Canada to the UK and is a working and show dog. In this picture she was competing in Scotland at a weight pulling event.

Canadian Eskimo Dog in main photograph: High Lonesomes Arcticice Torch (aka Torch) is a stunning Canadian Show Champion. She is owned by Beverly Arseneau, from Alberta in Canada. 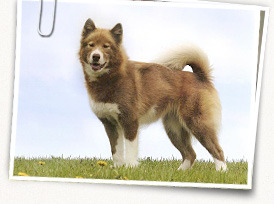 May be of any colour or combination of colours. Most common: black, white, red, grey, silver, cinnamon

If you have any suggestions or if you think you’ve spotted an error, please let us know in our Canadian Eskimo Dog forum.