The Chow Chow is a member of the Spitz family of dogs and was developed and used in China as a versatile working dog and a source of food and fur for over 2,000 years. In addition to being a competent hunter the Chow also guarded property and was employed as a draught animal to pull carts and sleds. The name Chow is popularly supposed to derive from the Chinese term for food but is more likely the name given them by British sailors chow chow being the shipboard term for the miscellaneous cargo carried back to England from the orient. The first Chow Chows arrived in England in the late 19th century and in 1895 the Chow Chow Club was formed. The breed was recognized by the Kennel Club in 1894.

The well-bred, well-socialized Chow Chow can be a most excellent family pet but his singular personality does require some understanding. He is frequently described as having a rather cat-like attitude being independent, not given to effusive displays of affection, dignified and inclined to be stubborn. He can be extremely wary of strangers and does not easily or indiscriminately make friends being rather indifferent to all but those he loves. Although generally very quiet he is also very territorial and is a reliable guard dog who will staunchly defend his home and family. The unique Chow scowl, his size and appearance are also effective deterrents to intruders. His loyalty to, and affection for, all members of his family are unquestionable but the Chow is essentially a one-person dog and there will usually be one individual to whom he will give absolute devotion. Intelligent, strong-willed and possessing a quiet confidence in himself the Chow needs an owner who can firmly but kindly demonstrate where the true authority in the household resides. Being rather less of a pack dog than other breeds the Chow tends not to enjoy the company of dogs other than those in the same household and will seldom tolerate unknown dogs of the same sex. The almost irresistible fluffy Chow puppy will grow into a powerful dog of complex personality. The breed is therefore not recommended for the novice owner.

The exercise requirements of the Chow Chow are moderate. A daily walk of 40 - 60 minutes and the opportunity to romp in the backyard are usually sufficient to keep him fit and mentally stimulated. He will enjoy being outside but shade and water must be provided as the breed is sensitive to heat and will become stressed and have difficulty in breathing if over-heated. It is not recommended that the Chow should be allowed off-lead in public areas as his instincts may lead him to display hostility towards strangers and other dogs. Care should be taken not to over-exercise puppies as undue pressure on developing bones and joints can lead to permanent damage.

A Chow Chow is a dog of considerable intelligence, but he is not easy to train. He has a tendency to please himself rather than the desire to please his owner. Blind obedience should not be expected, he is more likely to obey a command if he can see some point in doing so. The key is to gain his respect by consistent, calm, and firm but fair handling. Resorting to harsh verbal and physical methods when confronted by apparent obstinacy will do nothing to solve the problem as the Chow will not be physically forced. Indeed, physical punishment will lead to aggression or to a once proud dog broken in spirit. Despite any difficulties encountered it is important that basic training is undertaken both to instil good manners and to achieve the verbal control necessary to manage this strong-willed and physically robust breed. Early and on-going socialization is essential to teach the dog how to cope with various situations and to tolerate unfamiliar people. Inadequate socialization can lead to nervousness, over-protectiveness and other anti-social behaviours.

Some photographs of the Chow Chow... 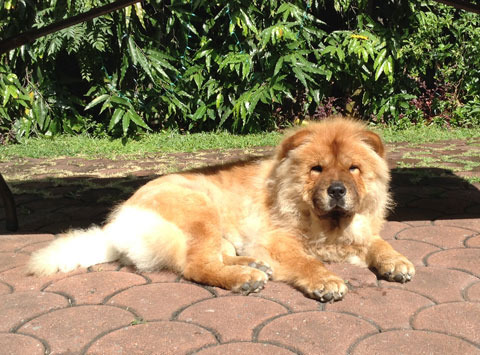 Chestnut is a very sociable and submissive 11 month old dog, but unfortunately prone to skin problems. 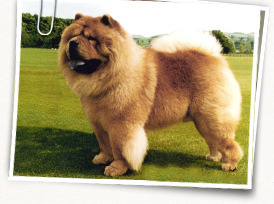 Solid black, red, fawn, blue, cream or white, with or without shading

If you have any suggestions or if you think you’ve spotted an error, please let us know in our Chow Chow forum.