The Dalmatian is also known by the names: Dal, Dally.

The exact origin of the Dalmatian is uncertain and is the subject of speculation and dispute. Many nationalities have been claimed from Africa to Asia to Europe. Possibly these dogs were indeed widespread and well known in each location as it is agreed that travelling Romanies were accompanied by spotted dogs of the Dalmatian type. The name Dalmatian implies a strong link with Dalmatia but there is no evidence that the breed was developed there, although that was obviously one of its stable homelands. The ancestry of the Dalmatian is also open to conjecture with the Istrian Pointer, the Bengali Braque, the Braque Francais, the Great Dane and the Bull Terrier being suggested by various sources as having contributed to the breed. Despite these uncertainties this is undoubtedly an ancient breed which has served man through the centuries as trail hound, shepherd, guard, messenger, vermin hunter, bird dog, draught dog, sentinel, circus performer, stage and screen performer, retriever, pack hound on large game, firehouse dog, and last but not least, as the only recognized carriage dog in the world. Dalmatians became popular in the latter role during the 1800s running with the carriages of the well-to-do or with the mail and transport coaches. Their function was to either clear the way for the horses or to guard the coach and horses when they were left unattended.

The Dalmatian is a fine pet for the active family. He is a high-energy, hardy dog possessed of great stamina and, as such, needs a considerable amount of exercise. He is also very much a people-oriented dog with a great need of human companionship. The Dalmatian will not fare well if left alone in a backyard deprived of company and exercise. In such a situation he will become depressed and bored and may well try to escape or find destructive amusements. Also, his short coat renders him sensitive to extremes of heat and cold and this is another reason why the Dal should be regarded as an indoor dog. He has a generally friendly and out-going temperament but can be rather reserved with strangers and is an excellent watchdog who will alert his owners to anything out of the ordinary. He also has the courage and ability to defend his territory if provoked. His playful, happy-go-lucky personality, good nature and sheer joy in life make him a wonderful companion for older children and energetic adults but his exuberance is unsuited to small children or to the elderly or frail. Despite his carefree demeanour the Dalmatian is also very sensitive and will be worried by stress or tension within the family and will be upset by any harsh treatment.

Vigorous daily exercise is essential for the physical and mental well-being of the adult Dalmatian. He will need long daily walks and the opportunity to run and play in a secure area to prevent him becoming stir-crazy and consequently resorting to inappropriate behaviours. Biking, hiking, jogging, tracking, agility, obedience, frisbee, flyball, etc. are all activities that the Dalmatian can participate in and enjoy. Care must be taken not to over-exercise growing puppies. Young bones and joints are very vulnerable to damage which can lead to a life of pain and disability and vigorous exercise should not be attempted until the dog is mature.

Basic obedience training is necessary to enable the dog to learn what is expected of him in human society. Dalmatians are very intelligent, have excellent memories and are quick to learn but they are also somewhat strong-willed and may present some training challenges. Firm, fair, and consistent handling using positive reinforcement methods is the best way to earn their respect and co-operation and to have a happy dog who is eager and willing to work with you. It is important that early and on-going socialization is carried out. Exposure to as many new people, dogs, things and situations as possible will ensure that the puppy grows into a confident, friendly, well-adjusted adult.

Some photographs of the Dalmatian... 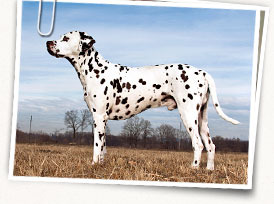 If you have any suggestions or if you think you’ve spotted an error, please let us know in our Dalmatian forum.