Originating in France more than 600 years ago, the Dogue de Bordeaux is believed to be descended from the Mastiff-type dogs of ancient Rome and was bred to guard property, hunt boar, herd cattle, bait bulls and bears, and fight others of its own kind. The first reference to the name Dogue de Bordeaux in France was in 1863, and in 1895 an effort was made to establish the breed in England. The impact of two world wars nearly destroyed the breed but it was re-established in the 1960s. Prized as a protector and sweet-natured companion the Dogue de Bordeaux is increasing in popularity outside its native land.

Careful breeding has ensured that todays Dogue de Bordeaux has a much milder temperament than its rather ferocious ancestors whilst losing nothing in the areas of courage, vigilance, protectiveness, and loyalty. Their size, appearance, and natural presence is such that they are an effective deterrent and rarely need to make actual contact with a person who may pose a threat. As a guarding breed they are instinctively territorial and may be reserved with strangers. An extremely devoted companion the Dogue de Bordeaux is an affectionate and tranquil family dog and usually very good with children. They are playful and have a high stimulus threshold, but they can be intolerant of other dogs if not correctly trained and socialized. This is not a breed for first-timer or inexperienced owners.

As with all large breed dogs, exercise must be limited in the young animal in order not to irreparably damage joints and bones. The adult Dogue de Bordeaux requires sufficient exercise to ensure that the musculature does not deteriorate. They cannot tolerate heat owing to the shape of the muzzle therefore exercise should be confined to the cooler parts of the day during hot weather and they should always have a shady area in the house or garden to retreat to.

The Dogue de Bordeaux is an extremely large and powerful dog usually weighing considerably more than the minimum stated in the Standard. It is therefore essential that control is established through early obedience training, especially in the areas of pulling on the lead and jumping up to greet people. In a physical test of will between Dogue de Bordeaux and owner the winner will always be the Dogue so it is important to gain good verbal control and to teach calm behaviour. This can be achieved by positive training methods, patience, and consistency which will earn you respect as a trustworthy leader. Dogues de Bordeaux can be a trifle stubborn, but they are very intelligent and a lesson learned is not forgotten. Socialization should also begin early. This will bring the reward of a dog who is well-mannered and accepting of other animals and children, and not unduly suspicious of strangers.

Some photographs of the Dogue de Bordeaux... 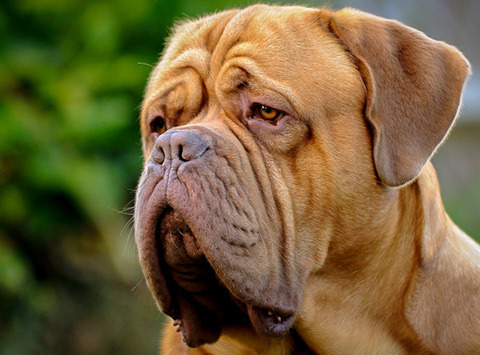 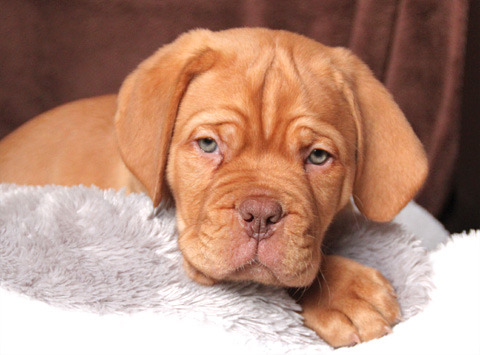 Harley (Kenxiam Bronx) as a puppy.

Any solid shade of fawn, from mahogany to Isabella

If you have any suggestions or if you think you’ve spotted an error, please let us know in our Dogue de Bordeaux forum.