The Eurasier is also known by the names: Eurasian, Eurasian Dog.

The Eurasier is a comparatively new breed which was developed in Germany in the 1960s by Julius Wipfel who desired to create the ideal family dog. To accomplish his goal he cross bred Chow Chow dogs with German Wolfspitz bitches and produced the predecessor of the Eurasier - the Wolf-Chow. In 1972 Samoyed blood was introduced to correct a variety of problems which had occurred as a consequence of in-breeding. With careful selection breeding to type was achieved and the dogs were re-named Eurasiers. The breed was recognized by the FCI in 1972 but it is still a relatively rare breed outside its country of origin.

Developed specifically as a family dog the Eurasier fulfils all the criteria for this role. He is a loyal and affectionate companion whose joy is to be with his family and to share in their lives and activities. If excluded from the household and deprived of human society the Eurasier will pine, becoming depressed and miserable and the qualities so prized in the breed will fail to develop. He is a calm, confident, even-tempered dog able to assess the abilities and vulnerabilities of those he interacts with. Thus he tends to be very gentle with children and the elderly, but also willing and able to play vigorously with those who wish to engage with him. This sensitivity also encompasses atmosphere within the home and he will quickly pick up and react to emotions, tensions and stresses. He generally gets on very well with other dogs and is also tolerant of cats and other small domestic pets as, although he enjoys chasing games, he has no hunting instincts. The Eurasier is a fairly quiet dog who rarely barks unnecessarily. Naturally protective of his property and wary of strangers he is a vigilant watch dog alerting to and challenging the presence of intruders but, being basically non-aggressive, he will not attack but will produce a deep threatening growl if provoked. All the best qualities of the Eurasiers progenitors have come together in one charming and harmonious whole - one of the best family dogs to be found.

The Eurasier requires a moderate amount of daily exercise to keep him physically fit and mentally alert. A good walk and the opportunity to run and play with other dogs is the ideal. He is very adaptable and will happily go along with the pursuits of very active families or will be content with a walk and a play and then to relax with you. The most important thing to him is to be included in the family circle.

Basic obedience training is necessary to ensure that the Eurasier learns what is expected of him and how to behave well in a human world. He is a highly intelligent dog with a strong desire to please, but he is also sensitive and harsh physical or verbal training methods are unnecessary and ineffective. His incentive to learn is dependent on mutual affection, trust and respect. Positive reinforcement using praise and/or food rewards will accomplish much more than will rough handling and hard discipline. Socialization should be started early in order that the dog becomes accustomed to as many different people, places, things, and other animals as possible. Lack of appropriate socialization may result in a fearful or timid dog, or one that is overly suspicious of strangers.

Some photographs of the Eurasier... 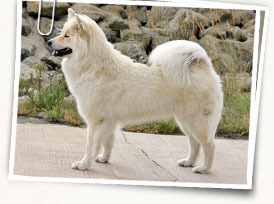 If you have any suggestions or if you think you’ve spotted an error, please let us know in our Eurasier forum.