The German Spitz (Mittel) is also known by the names: Deutscher Spitz.

The German Spitz is thought to be descended from the Northern sled and herding dogs which arrived in Europe with the Vikings. Spitz dogs are referred to in German literature as early as 1450 and by the 1700s were well known. Unlike the small (klein) Spitz which was always a companion dog, the mittel (medium) Spitz was a valued and versatile farm worker. Both sizes became very fashionable in Victorian and Edwardian England until their numbers declined during World War I when all things associated with Germany were rejected. The breed still is not numerous, but its popularity is increasing as its happy, equable disposition and its suitability as a household pet become more widely known. The code of ethics of breed fanciers forbids breeding between the klein and mittel.

This is a happy, active dog which is devoted to his family. He can demand quite a lot in the way of interaction and attention from his people so is totally unsuited to a life outside away from those he loves. He is highly intelligent and therefore very good at manipulating you in order to get what he wants, so firm, consistent leadership is necessary in order that he learns to respect the boundaries set for him. He is also a confident, independent and curious dog with an adventurous spirit which will lead him to roam if fences are not secure. Although quite happy to curl up by the fire and sleep he needs things to keep him occupied during waking hours otherwise he may make his own, possibly destructive, amusement. His watch dog qualities are excellent and sometimes immoderate. Always very alert to what is going on excessive barking at strangers, other dogs or noises can become a problem and teaching him when barking is not appropriate is important. This is a fine companion breed for those who want a small-medium, sprightly dog and can cope with the demands of daily grooming of the abundant coat.

The German Spitz is a busy, energetic dog and will provide himself with a considerable amount of exercise playing and investigating in and around the house and garden. However, a daily walk is necessary, not only to keep him physically fit, but to provide important mental stimulation. He has an enthusiastic attitude to any task before him and, once trained, is a willing and often successful competitor in agility trials.

Basic obedience training should commence from puppy-hood in order that he learns to become a socially acceptable dog and to fulfil his potential as a good family member. His innate intelligence means that the German Spitz is quick to learn, but he can be rather willful and therefore present training challenges. Rather than trying to force him to do things the better approach is to encourage him to want to do things for a reward. Once he realizes that a certain behaviour is followed by a treat and/or praise he will be more likely to repeat the behaviour when instructed to do so. Socialization which accustoms him to various situations, different types of people, other dogs, potentially alarming objects, etc. is vital. Early and on-going socialization will prevent any nervousness or aggression and the dog will grow to be the level-headed, confident, buoyant representative of its breed that it should be.

Some photographs of the German Spitz (Mittel)... 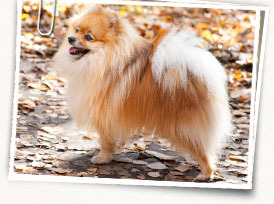 All colours and markings

If you have any suggestions or if you think you’ve spotted an error, please let us know in our German Spitz (Mittel) forum.