The Irish Wolfhound is also known by the names: Cú Faoil.

The exact origin of this ancient breed is lost in time but the Irish Wolfhound is believed to be descended from dogs which accompanied traders from the Middle East thousands of years ago. Mentioned in writings of the ancient Greeks and Romans, favourites of the old Irish kings, the subject of paintings and drawings, surrounded by myth and legend and many undoubtedly true tales of loyalty and valour through the ages, the Irish Wolfhound is one of the most magnificent and noble members of the canine race. Bred to hunt and kill wolves, and other large game such as wild boar, stag and the Irish elk, their efficiency almost spelled their own downfall. By 1780 Ireland was cleared of wolves and the numbers of Wolfhounds dwindled to the point of extinction, their plight being compounded by the famine of 1845. The resurrection of the breed was accomplished by Captain George A. Graham who, in 1862, collected together as many of the remaining Wolfhounds as he could find and initiated a breeding program. Whether his goal was attained by ‘pure’ breeding or whether he used other breeds such as Great Danes, Deerhounds and Mastiffs with his remnants to re-create the ancient breed is a matter of debate but, however it was done, a debt of gratitude is owed to him. The Irish Wolfhound was recognized by the Kennel Club as a Sporting breed in 1925.

Despite his great size and strength the Irish Wolfhound is a gentle soul and one of the most amiable of breeds. His loyalty to his owners is legendary and such is his capacity for devotion that he must be considered to be an indoor dog. He needs the company of his loved ones and a place in their hearts and their home. On no account should he be relegated to a lonely life in the backyard as he will become depressed and miserable and fail to thrive. He has a natural affinity with children showing infinite patience and tolerance, however he can inadvertently cause injury through his sheer weight and size so boisterous games should be avoided. Children must never be allowed to ‘ride’ a Wolfhound of any age nor should the dog be encouraged to stand on its back legs as both activities may damage the dog’s back. His peaceable nature allows him to get along well with other dogs and with cats and other small animals if correctly trained and raised with them. Although he is not aggressive he will alert to strangers and, if sufficiently provoked, he will bravely protect his people and property from perceived danger to the utmost of his ability. It would however be a foolhardy trespasser who would fail to be intimidated and deterred by his size and thunderous bark. There is absolutely nothing negative to say about his personality but some caveats need to be considered regarding his size. He can grow considerably larger than the minima set in the breed Standard, some adult males stand over 86 cm (34 ins) at the shoulder and can weigh over 82 kg (180 lbs). Space, both inside and out is necessary as a sprawling Wolfhound covers quite a large area of floor and he will cross a small back garden in a couple of strides. He can also be somewhat clumsy. Veterinary care (vaccinations, worming products, anaesthesia, etc.) will cost a lot more than for an average size dog, as will food. He must be fed his daily ration in two meals and not exercised for at least an hour each side of the meal to avoid life-threatening GDV. Apart from matters connected with size the only drawback to owning an Irish Wolfhound is his short life expectancy. The breed average is 6.5 years. A few may live to 10+ but some will die as young as four or five. This is not a breed to be taken on lightly, but those that have the financial resources, can provide the space, company, exercise and training necessary will have their lives enriched by this wise, impressive and kindly dog.

It is essential that Irish Wolfhound puppies are not over-exercised. Dogs of this breed are not fully mature physically until nearly three years and until they are at least 18-24 months old pups and adolescents should not be taken on long walks or subjected to any form of vigorous exercise or rough play with people or other dogs. Jumping of any kind (in and out of cars, on and off furniture, etc.) and running up and down stairs must be avoided. Immature bones and joints cannot withstand stress and crippling, irreparable damage can easily be done. The adult Wolfhound needs long daily walks to keep him trim and mentally alert. He will appreciate the opportunity to gallop freely in a secure area but he is a hunting hound so discretion is necessary around livestock.

Basic obedience training is important for all dogs, especially for a dog who can easily tow an adult down the street if he sees something worth investigating in the distance or across the road. The Irish Wolfhound is an intelligent dog and not difficult to train as he is a quick learner and willing to please a loved and respected owner. Training should be firm, kind and consistent using only positive reinforcement methods which reward good behaviour with treats and praise. There is no place in training for harsh physical or verbal corrections. Such methods will serve only to confuse and frighten the dog and thus slow the pace of learning as well as eroding confidence and weakening the bonds of affection and trust between dog and owner. Socialization should be started at a young age by introducing the pup to as many different situations, animals and people as possible. The Wolfhound who is adequately trained and accustomed to the, sometimes odd, human world in which he finds himself will be a joy to own and an excellent representative of his breed.

Some photographs of the Irish Wolfhound... 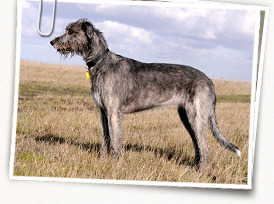 Rough, harsh. Wiry and long over eyes and under chin

If you have any suggestions or if you think you’ve spotted an error, please let us know in our Irish Wolfhound forum.