The Japanese Shiba Inu is also known by the names: Shiba Ken, Shiba.

The Japanese Shiba Inu is the smallest of the Spitz-type dogs of Japan. Spitz dogs evolved in the Arctic regions and are believed to have arrived in Japan many thousands of years ago with the earliest immigrants, the Jomonjin.. Archaeological excavations have revealed traces of small dogs associated with these primitive peoples dating back 9,000 years. The Shiba Inu was developed to work with hunters by flushing birds and small game. It was also used to put up and chase wild boar. Its size, keen senses and agility made it an excellent, and valuable, hunter. While there is no doubt that ‘Inu’ means ‘dog’, there is no agreement on the meaning of ‘Shiba’. Some contend that it means ‘brushwood’ referring to the similarity in colour of the dog’s coat to the autumn leaves of the brushwood; others believe it derives from the brushwood where the dogs hunted; still others contend it means ‘bush’, again a reference to the terrain where the dog worked; lastly it is contended that ‘Shiba’ is an obsolete word meaning ‘small’. Whatever the derivation these ‘small brushwood dogs’ became almost extinct after World War 2 and it was due only to a breeding program using pure dogs from remote areas of the country that they survived and flourished to become the most popular breed in Japan today.

The Shiba is frequently described as “a big dog in a small body”. He is lively, brave and independent with a boldness that gives him the confidence to believe that he can take on the world and win. Unless carefully and thoroughly socialized he can be aggressive with other animals and particularly with dogs of the same sex. His hunting instincts remain keen which, together with his strong prey drive, will lead him to seek out game and to chase cats and other small animals. It is therefore necessary that gardens and exercise areas are very securely fenced and to ensure that he is never off-lead in open areas. While the Shiba tends to be rather reserved in his attitude toward strangers he is affectionate and loyal to his family and, although he can cope physically with an outside life, he will be more comfortable and happier indoors with his people. Always alert, Shibas are good watchdogs but they bark very little under other circumstances. They do however vocalize in other ways such as yodelling and the infamous ‘Shiba scream’ which accompanies activities that they would rather not take part in such as bathing, lead training, nail clipping, etc. The Shiba Inu is a fine pet for those with experience. He can be somewhat dominant and manipulative so it is necessary to employ strong leadership through firm, fair and consistent handling which will gain his respect. Shibas are good with children if raised with them but they tend to dislike being either restrained with hugs or pulled about so they are more suited to families with older children.

This is a very active, energetic breed which requires adequate daily exercise for both physical and mental well-being. Adult Shibas can run for miles with an owner who cycles or jogs, and with their fast, graceful, almost cat-like movements they are well suited to the sport of agility. Whichever form of exercise is undertaken it must always be borne in mind that a reliable recall is the exception rather than the rule in this breed. Any off-lead activity must be carried out in a secure area as, once running and hunting, the Shiba will usually be unresponsive to voice commands.

Shiba Inus are not untrainable but they can be a challenge. They are extremely intelligent and readily learn commands but generally tend to have an “I will get back to you on that” attitude if the command does not meet with the desires of the moment. On-lead obedience training can be achieved quite easily if the dog respects the handler and if a reward-based system of training is employed. Being smart they can become easily bored with repetitive exercises which, to them, seem pointless. It is as well to keep training sessions short, interesting, and fun. Socialization, which involves accustoming the puppy to various situations, people, and other animals, should be started early and should be an on-going process. The inadequately socialized dog may be fearful or aggressive and will not fulfil his potential as a confident, well-mannered representative of his breed.

Some photographs of the Japanese Shiba Inu... 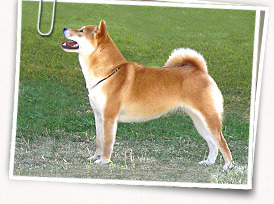 Red, black and tan, white with red or grey tinge, red with an overlay of black guard hairs (red sesame)

If you have any suggestions or if you think you’ve spotted an error, please let us know in our Japanese Shiba Inu forum.