The Keeshond (pronounced ‘Kazehawnd’; plural Keeshonden) is a member of the northern Spitz family of dogs which evolved in the Arctic regions. For centuries Keeshonden were used as guards and vermin exterminators on the barges and small boats that travelled the rivers and canals of Holland. This association gave rise to the name by which they became known - the ‘Dutch Barge Dog’. The name ‘Keeshond’ can be traced to the dog owned by Cornelis de Gyselaer who was the leader of the Dutch Patriot political party which challenged the Dutch royalists. His dog, Kees, became the mascot and symbol of the Patriots and this medium-size, Spitz-type breed became known as the Keeshond. The failing of the Patriot uprising saw the breed fall from popularity and it languished in obscurity until the early 20th century when Baroness van Hardenbroek started to breed them. Today the Keeshond is a well-known companion and show dog

This sturdy, good natured dog is an ideal family companion. He is loyal and affectionate and bonds strongly with his people. In temperament and personality he is very much a ‘moderate’ Spitz - less independent, less dominant, less reserved, more outgoing, gentler, and more sensible than many related breeds. With his thick coat the Keeshond can endure extremely low temperatures but his home-loving nature and his devotion to his owners means that he does best as an indoor dog who is included in as many family activities as practicable. Bred for hundreds of years to be a companion and to live in close proximity with people he will thrive and reach full potential only if allowed considerable human contact. He is an excellent watch dog with acute hearing and a strong voice who will alert enthusiastically to visitors and then greet them warmly once he knows they are welcome. Neither timid nor aggressive he is usually out-going and sociable with people and other dogs. His luxuriant coat demands a commitment to thorough grooming at least once a week, and more frequently during the twice-yearly moulting seasons when vast amounts of undercoat are shed. A lively, happy fellow the ‘smiling Dutchman’ is a suitable companion for people of all ages.

The Keeshond is an accommodating dog as far as exercise is concerned. He will be content with a daily half-mile walk or a one hour run which will keep him physically fit and mentally stimulated. If, however you wish to take longer hikes, or to get involved in sports such as agility and flyball, or energetic games of ball and frisbee he will be delighted to participate. His heavy coat means that vigorous exercise in hot, humid weather is inadvisable as overheating may lead to dehydration.

As with many of the Spitz breeds training may present a few challenges. The Keehond is an intelligent dog and will sometimes apply his own logic to a situation rather than following commands exactly or, if bored, he will invent new ways of doing things to provide himself with entertainment. Training sessions should therefore be kept short, fun, and interesting for him. Consistency and patience combined with reward-based methods are the key to success with this breed - he will learn far more quickly if he is gently shown what to do and rewarded for a correct response rather than being nagged or manhandled. Socialization should be an on-going process starting at a young age in order to familiarize the dog with various people, places and other dogs.

Some photographs of the Keeshond... 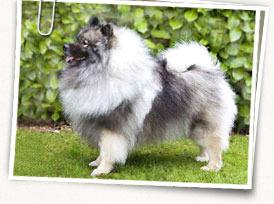 Mixture of grey and black. Cream forelegs and hocks

If you have any suggestions or if you think you’ve spotted an error, please let us know in our Keeshond forum.