The Leonberger is also known by the names: Leo.

The development of the Leonberger is credited to Heinrich Essig, a citizen of Leonberg, Germany who, it is said, wished to create a lion-like dog to complement the heraldic lion on his towns coat of arms. Exactly how Essig created the breed is somewhat shrouded in mystery. It is believed that he began by crossing a Landseer Newfoundland with a Saint Bernard, later adding Pyrenean Mountain Dog blood. Lately it has been proven to be genetically impossible for the Leonberger to have developed solely from these three breeds, other dogs must have been used but, unfortunately, there are no reliable extant records of Essigs breeding programme. By whatever methods and crosses it was accomplished it is unarguable that Essig succeeded in producing and promoting a most impressive dog which, in 1846, he declared to be a legitimate breed in itself. As with many of the German breeds the impact of two world wars rendered the Leonberger almost extinct. The enthusiasm of a few dedicated people in the 1920s, and again in the 1940s, brought the breed back from the edge. Still a relatively rare dog outside its native country the popularity of the Leonberger is steadily increasing elsewhere.

An unfriendly Leonberger is a contradiction in terms. Bred for many years for stability of temperament the breed is renowned for its good nature and sociability. Their love for family is boundless and they are usually extremely tolerant of children, preferring to walk away if their patience is too sorely tried rather than displaying any shortness of temper. Being so people-oriented they do not do well if relegated to a lonely outdoor life. The Leonbergers happiness and well-being depends upon being included in as many aspects of family life as possible, from simply relaxing in your company to shopping, swimming, walking, visiting friends, etc.. Despite their innate gentleness they are brave and confident and make reliable watchdogs whose impressive presence and deep bark are formidable deterrents to trespassers.

Suitable exercise with prevent the problems that come with boredom and suppressed energy, such as inappropriate barking and chewing, fence running, digging, etc.. A Leonberger will require two walks a day, each of at least half-an-hour, plus the opportunity to run and play with you or other dogs in a secure area. Swimming is a very good exercise which most Leos take to with enthusiasm, and they have a good reputation as water-rescue dogs. They will also be happy to hike, backpack, track, and participate in agility and carting. These types of vigorous exercise should not be undertaken until the dog is at least 18 months old in order to avoid the risk of permanently damaging growing joints and bones.

While perhaps not the first breed that one may think of as an obedience dog the Leonbergers intelligence and willingness to please, coupled with innate calmness and the ability to cope with stress, means that Leos can do very well in competition. It is essential that at least basic training is undertaken, particularly loose-lead walking and not jumping up at people. Socialization from an early age is necessary to ensure that the Leo grows into a well-mannered, amenable, and confident adult. Lack of adequate socialization carries the risk of the dog becoming fearful and perhaps aggressive as a result of shyness. Socialization with other dogs is also extremely important to avoid any dominant-aggressive tendencies.

Some photographs of the Leonberger... 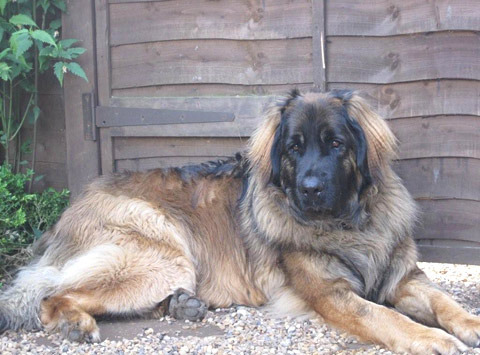 Rocky (Bavaruki On The Rocks) pictured here at two and a half years of age.

Bailey 2002-2011. He was an amazingly loyal, friendly dog and is much missed. For more info and photos, see Bailey's thread in our forum.

Lion gold, red, reddish brown, sandy (fawn or cream), and all combinations in between. Black mask

If you have any suggestions or if you think you’ve spotted an error, please let us know in our Leonberger forum.