The Miniature Schnauzer is also known by the names: Mini, Zwergschnauzer.

Over the years breeders have taken great care to preserve the excellent temperament of these rugged little dogs. The Miniature Schnauzer, the most popular of the three varieties of Schnauzer, is primarily kept as a companion nowadays and valued for his light-hearted personality and his devotion to his family. He thrives on attention and human companionship and is not a dog to be relegated to the backyard and left to his own devices. His considerable intelligence means that he will become bored without the stimulation of interaction with his people and this may easily lead to destructive and other inappropriate behaviour. It is his delight to be included in as many activities as possible or to relax in the presence of those to whom he has given his loyalty and affection. Although terrier like in appearance there is nothing of the terrier temperament in his make-up but, given the opportunity, he is a very keen and efficient ratter. Neither is he a toy dog, he is as sturdy and as robust as his larger cousins. Protective rather than aggressive he makes an excellent watch dog always alert to what is going on and announcing the presence of strangers or any untoward activity with enthusiastic barking. He is generally very reliable with children and is not inclined to look for trouble when encountering other dogs. This bright, loving and loyal dog is always ready to learn but never subservient. At home in the town or the country, the apartment or the mansion, with a family or a single owner, he is the perfect companion.

A Miniature Schnauzer will accommodate himself to almost any lifestyle and will happily take as little or as much exercise as is offered. However a daily walk and the opportunity for free running in a secure area will keep him in good physical shape and provide stimulation for his enquiring mind. He is a naturally active and agile dog but consistency is important, a dog that has been used to very little exercise cannot be expected to suddenly walk for many miles. With correct conditioning and training agility is a sport which he will enjoy and at which many Miniature Schnauzers excel. For these little dogs true happiness comes when they are trotting along with their owners exploring the world around them.

As with all dogs basic obedience training should commence from puppy-hood in order that good manners are instilled and he becomes a agreeable companion and acceptable to society. The Miniature Schnauzer is not difficult to train and can reach the highest levels in obedience competition. He is willing to please and very quick to learn and, once he understands what is required, he is prompt to comply with commands. All training should be motivational - good work and good behaviour being reinforced by rewards of treats and praise. Harsh discipline, verbal or physical, will accomplish nothing. Such methods will teach the dog only to be frightened of his owner and confusion and lack of trust will ensue. Socialization which accustoms the dog to various situations, people, sounds, animals, etc. is of the greatest importance and should start as early as possible in the puppys life. Adequate socialization will ensure that he grows to be a confident, well-mannered, friendly dog who is a credit to his breed.

Some photographs of the Miniature Schnauzer... 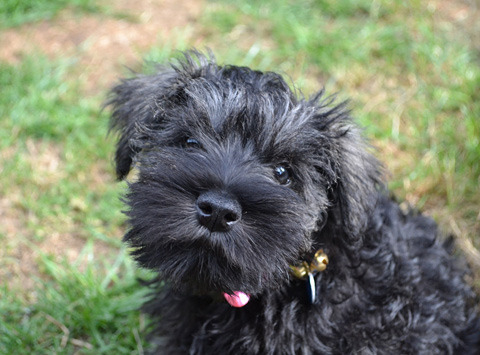 This is Cleo, our delightful Miniature Schnauzer.

If you have any suggestions or if you think you’ve spotted an error, please let us know in our Miniature Schnauzer forum.