The Newfoundland is also known by the names: Newfie.

The exact origin of the Newfoundland is unclear and several conflicting theories exist, most of them depending on the crossing of an‘outside’ breed with a native, black, water-loving dog. The influential dogs suggested include: ‘bear dogs’ brought to the island by Viking explorers; Great Pyrenees travelling with Basque fishermen; Tibetan Mastiffs which accompanied early European explorers. Some Newfoundland Indian grave sites, dating to 400 AD, have been found to contain the skeletal remains of giant dogs so, whatever the truth of the matter, this would appear to be one of the older breeds of dog. The Newfoundland was bred to be a true and versatile working dog. Famed for his swimming ability he was an invaluable aid to fishermen, helping to haul in nets, towing boats, carrying lines to shore, and rescuing victims of shipwreck and others in danger of drowning. On land he packed supplies, hauled wood, pulled tradesmen’s carts, and powered smiths’ bellows and turners’ lathes. Mechanization has rendered the Newfoundland redundant in most of these tasks but he is still highly valued as a water rescue dog and, of course, as an outstanding companion.

The temperament of a well-bred Newfoundland is as close to perfection as one may get in a canine. Gentle, affectionate, and intensely loyal and devoted to his people he is an excellent family dog with a kindly and patient attitude towards children. Whilst not a guarding breed he will alert to trespassers by barking and his protective instinct will be roused by any perceived threat to his family. This generally takes the form of placing himself quietly in a guarding position between the danger and the family rather than by growling or other threatening behaviours. Although this breed is sufficiently physically robust to live outside they have a great need for companionship and human interaction therefore they will be much happier if allowed to live inside as a true member of the family. Friendly to all well-meaning people, the sweet, sociable, nature of the Newfoundland usually extends to other dogs and animals, but some males may be intolerant of other males. The character of this breed can be summed up no more eloquently than in the lines written by Lord Byron in 1808 as a memorial to his Newfoundland ‘Boatswain’: “ ... Beauty without vanity, Strength without insolence, Courage without ferocity, And all the virtues of man without his vices.”

Although tending to be inactive inside, the Newfoundland loves the outdoors and needs regulars walks and the opportunity to run around and play. If you can provide the chance for him to swim he will be in seventh heaven. Their thick, heavy coat means that they are rather intolerant of the heat so exercise should not be undertaken in the hottest part of the day. Always be sure that shady areas and plenty of drinking water are available. As with all large breeds puppies need to be monitored to ensure that they are not over-exercised. While their bones and joints are developing they should not have, and do not need, long walks or any type of vigorous exercise which may lead to lasting, disabling problems in later life.

The Newfoundland is extremely intelligent and perfectly capable of thinking and making decisions for himself. While this may be invaluable in his role as life-saver, it may make obedience training something of a challenge, but patience, perseverance and consistency coupled with positive reward-based reinforcement, will achieve the desired results. It is important that a large breed such as this should have, at the very least, basic training in good manners so that you have control and pulling on the lead and jumping to greet people do not occur. Being rather slow moving and heavy they are not well-suited to such sports as agility, but they compete successfully in weight-pull, carting, competitive obedience and, naturally, water rescue tests. Early socialization with a variety of people and other dogs will prevent the development of shyness or aggression.

Some photographs of the Newfoundland... 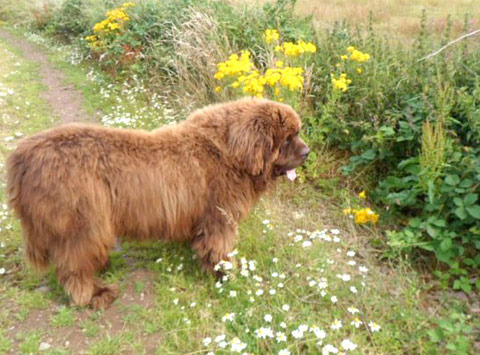 Zack is a real big bear and we are so proud of him! For more info and photos, see Zack's thread in our forum. 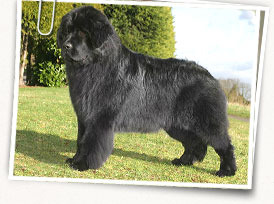 If you have any suggestions or if you think you’ve spotted an error, please let us know in our Newfoundland forum.