The Norwegian Elkhound is also known by the names: Norsk Elghund.

The Norwegian Elkhound is descended from the ancient Spitz family of dogs which evolved thousands of years ago in the inhospitable Arctic regions. Dogs of the Elkhound type have been known in Scandinavia for hundreds, if not thousands of years and canine skeletal remains found in western Norway dating back to between 4000 and 5000 BC have been identified as corresponding closely in form to the ‘modern’ Elkhound. However, research by geneticist Dr. Elaine Ostrander (University of Washington, 2004) using DNA analysis suggests that today’s Elkhound may be of more recent development. Whatever the truth of his lineage may be, throughout his existence he has been valued as aa efficient hunter and superb companion. The primary role of the Elkhound was and, in his homeland still is, that of the skilled hunter of elk, although he can work a variety of game both large and small. His method is to scent and track the quarry, bring it to bay and alert the huntsman to his location with high-pitched barking. To track through forest and thick undergrowth often deep in snow, to face an angry 450 kg (1000 lb) elk and to avoid being injured by hooves and antlers, requires a dog of exceptional stamina, sturdiness, courage and agility. The Elkhound also functions as a guard of family and property and is used to pull sleds. The first of this breed were imported into Britain at the beginning of the 20th century and the British Elkhound Society was founded in 1923. His increasing popularity as a pet and show dog has done little to change his appearance from that of the working dogs of old.

This loyal and energetic dog is an excellent companion for families or individuals. He thrives best if allowed to be around his people for most of the time and he is always eager to be invited to join in any activities or outings. His thick, weatherproof coat enables him to cope physically with living outside in cold weather but he will become stressed and miserable if deprived of company and attention for long periods of time and, being intelligent, he will also become bored and may resort to destructive or noisy diversions to relieve his tedium. He has a rather independent spirit and great self-assurance so it is necessary that he should kindly but firmly be made aware of house rules and the boundaries of acceptable behaviour from an early age. Failure to provide consistent leadership will leave the door open for him to take over the role of head of the family. The Elkhound is affectionate, but not fawning, with those he loves and he will generally accept the attentions of well-meaning strangers with courtesy rather than effusiveness. He is however an excellent watchdog. He is always alert to everything going on in and around his territory and will announce the presence of ‘trespassers’ with loud, continuous barking. While this piercing voice, which carries over miles, is an asset to the huntsman it is likely to be less well regarded in a domestic situation. It is therefore important to train the dog from a young age to desist when told to do so. With children he is usually good natured and reliable, entering into games and romps with enthusiasm, but the young Elkhound can be very boisterous and rather headstrong and may be a bit too much for small children. For those that can provide the necessary exercise, training, and effective leadership the Norwegian Elkhound will prove a fine companion.

As with many of the hounds the Norwegian Elkhound needs a significant amount of exercise. He is inclined to put weight on easily so two walks daily of at least thirty minutes duration will help to keep him trim and physically fit. Walks also have the benefit of providing mental stimulation in the form of interesting smells and sights. With off-lead exercise it should be remembered that he is a hound and is very likely to follow any enticing scent, becoming deaf to recall commands in the process. If a secure area can be found he will delight in the opportunity for unrestricted running and playing. The canine sports of tracking and agility will exercise his mind as well as his body.

Obedience training to at least basic level is necessary to instil respect and to ensure that he is a pleasant household companion and acceptable to the community in general. The Norwegian Elkhound is intelligent and independent, a combination that may make training somewhat of a challenge. Patience, benign firmness and consistency, in conjunction with reward-based methods, will bring out the best in him. Strong physical corrections and loud verbal chastisement are quite unnecessary and will have negative repercussions in that he may ‘shut down’ and refuse to work or will obey out of fear of punishment. The basis of training should be mutual respect and affection and if these are strong the Elkhound is a willing and very smart worker capable of succeeding at the highest levels of competition obedience. Socialization should be commenced early in puppyhood. The pup that has been accustomed to meeting various people and other dogs and animals, and who has been exposed to as many different situations as possible, will grow to be a well-rounded, assured, and level-headed adult.

Some photographs of the Norwegian Elkhound... 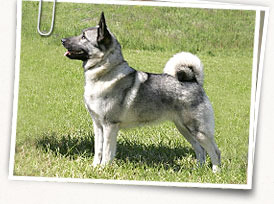 If you have any suggestions or if you think you’ve spotted an error, please let us know in our Norwegian Elkhound forum.