The Pharaoh Hound is also known by the names: Pharaoh, Kelb tal-Fenek.

The Pharaoh Hound originated on the islands of Malta where it is known as the Kel tal-Fenek (Rabbit Hound) and is honoured as the National Dog of Malta. The ancestors of the Pharaoh Hound were probably various prick-eared Mediterranean hounds, but island isolation has kept the breed pure over centuries. The name Pharaoh Hound was bestowed by British fanciers, presumably due to a resemblance to hounds depicted on ancient Egyptian artefacts, and was made official when the breed was recognized by the Kennel Club in 1974. There is no empirical evidence which links these hounds to ancient Egypt and no documented mention of the Kelb tal-Fenek prior to the 17th century. The theory that the breed is of more recent origin is supported by DNA analysis carried out by Dr Elaine Ostrander in 2004. The Pharaoh Hound was developed to hunt rabbits which were, and to some extent still are, an important food source. When hunting over the rough and rocky Maltese terrain Pharaohs make full use of acute hearing, keen eyesight, exceptional sense of smell, great speed and agility. Unknown outside its homeland until the 1960s the Pharaoh Hound has swiftly achieved popularity, both as a show dog and as a companion.

This beautiful hound is not only aesthetically pleasing but has a charming personality to match. He is a happy and affectionate companion who will bond very strongly with his people and in return should be regarded and treated as one of the family. While he is full of energy and loves a good run or romp outdoors he tends to be quite calm and quiet inside. He is generally good with children being at once playful and gentle. He has a sensitive nature and is quick to pick up on moods and emotions and may become stressed in an atmosphere of tension or in the presence of arguments. On the other hand he will empathize with sadness and take pleasure in his owner’s good spirits. Generally he will not seek confrontation with other dogs but, if challenged or attacked, he will not back down and will endeavour to give a good account of himself in a brawl. Being a natural born hunter care must be taken with small domestic pets and wildlife which the Pharaoh cannot help but view as prey. Although he has an independent streak he will not do well if shut out of the family circle as he will become miserable and bored and may seek to entertain himself with inappropriate behaviour. His thin skin and short coat make him very susceptible to the cold which is another reason to avoid outdoor kennelling. As with all hounds gardens need to be well fenced to foil escape attempts should anything trigger his hunting instinct or arouse his curiosity. He can be rather reserved with strangers and will bark to alert to their presence in his territory but he is not a guard dog. One of the endearing traits of the Pharaoh Hound is his ‘blush’. When excited or pleased with himself his nose and ears flush a rather becoming rosy pink. Being both intelligent and independent he needs strong but benevolent leadership to ensure that he is aware of his place in the household and the acceptable boundaries of behaviour. For those that can understand and accommodate the ways of a hound the Pharaoh is a delightful family pet, but it is not a breed recommended for inexperienced owners.

Bred for generations to hunt eight hours a day over difficult terrain without tiring the adult Pharaoh Hound’s exercise requirements are considerable. Long daily walks are essential to keep him fit and to provide an interest for him. Off-lead exercise should be approached with caution as his drive to hunt may be instantly triggered by an interesting smell, sight or sound and he will be off into the distance at an astonishing speed, deaf to recall commands. However, if a secure area can be found he will appreciate the opportunity to run and explore. The canine sports of lure coursing, agility and tracking will suit him and he is an excellent partner for running, jogging and vigorous games of fetch. Great care should be taken not to over-exercise puppies as stress and strain on immature bones and joints can lead to crippling and irreparable damage.

To ensure that he is agreeable to live with and welcome wherever he goes basic obedience training is a must. Pharaoh Hounds can be quite stubborn and decisive if they see no point to what they are asked to do and, if they do comply, they may use their initiative and do things their way rather than yours. The key to training this hound is to keep sessions short, fun, interesting and challenging. He will then regard training as an enjoyable sort of game and will enter into it enthusiastically. Harsh physical or verbal discipline simply will not work as training needs to be based on mutual trust, affection and respect. Rewarding good work with treats, praise or a game will achieve the best results in the shortest time. Socialization should be commenced early and be an on-going process. By introducing the pup to as many various people, other dogs, and novel situations as possible any tendency to shyness will be lessened and he will grow to fulfil his potential as a friendly, well-mannered and level-headed adult.

Some photographs of the Pharaoh Hound... 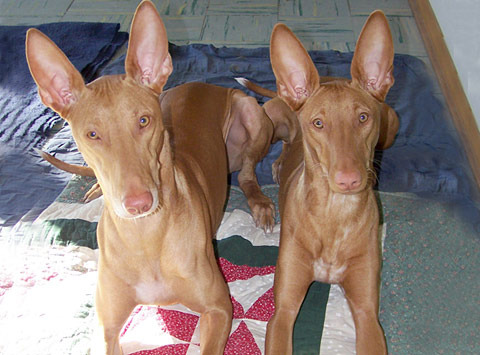 Rameses and Baby Isis, owned by Kristen in Ohio, USA

Demonstrating the 'Anubis position' of lying down. Where do you think the term came from? Rameses (left) and Baby Isis (right). For more info and photos, see Rameses and Baby Isis's thread in our forum. 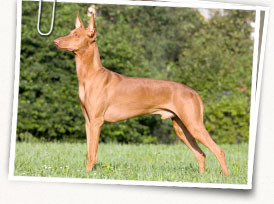 If you have any suggestions or if you think you’ve spotted an error, please let us know in our Pharaoh Hound forum.