The Rhodesian Ridgeback did not, as the name suggests, originate in Rhodesia but in South Africa. It evolved from mixing the native Hottentot hunting dog, which had a distinct ridge of hair on its back, with various breeds (Bloodhound, Greyhound, Mastiff, Great Dane, Saluki, and others have been suggested) which accompanied early European migrants to South Africa. The objective was to create a dog that could hunt; that was sizeable and courageous enough to protect the home, family and livestock against predators and intruders; had resistance to local disease; could endure the hot days and freezing nights; and would provide loyal companionship. In the 1870s a few of these dogs were taken to Rhodesia where the breed prospered and was further developed by careful breeding programs. In Rhodesia they became popular with hunters of lion and leopard and acquired the alternative name of African Lion Dog. The Ridgeback was found to have excellent scenting and tracking abilities, the speed to pursue its quarry and the fearlessness, agility and intelligence needed to hold a big cat at bay until the hunter arrived to despatch it. In 1922 the first breed club was established in Southern Rhodesia and a breed standard drawn up in order to encourage conformation among breeders. It is believed that the first representatives of the breed were imported into Britain in the 1920s, but numbers remained small until after World War II when, in 1952, the Rhodesian Ridgeback Club of Great Britain was founded to promote the breed. The versatility, good nature and aesthetic appeal of the Ridgeback has ensured its popularity as a show dog and companion.

Intensely faithful and devoted to his people the Rhodesian Ridgeback’s true happiness lies in knowing that his loyalty and affection is reciprocated and that he is regarded as one of the family. A determined, intelligent and strong-willed dog he needs a leader who, from the start, will firmly but benevolently guide him and help him to learn household rules and the boundaries of acceptable behaviour. He is usually very good with children but his size and energy may make him a more suitable companion for older children. With strangers he is rather reserved but not aggressive, observing and weighing up people he does not know rather than dispensing indiscriminate friendship. He may be quite domineering with other dogs, especially those of the same sex. However, if raised with dogs and other animals he gets along well with them but, being a hunting dog, care must be taken with small domestic pets and wildlife. He can be quite protective of his territory and his family and is an excellent and brave watchdog. He is always alert and his size, bark and ‘rumble’ should be deterrent enough for even the most foolish of ill-intentioned trespassers, but he is not the type to act first and think later - quite the reverse. Gardens need to be well fenced to foil any attempts to follow enticing scents or potential prey as he is a keen hunter and, once on the trail, may become lost, injured, or worse. The combination of breeds, whatever they may have been, which make up the Ridgeback’s ancestry has forged a dog that is extremely versatile, extremely intelligent, extremely loyal, extremely beautiful and a wonderful family companion.

The Rhodesian Ridgeback requires plenty of exercise to keep him in top condition both physically and mentally. A couple of long walks daily plus a good run once or twice a week are the minimum recommended. Caution is advised with off-lead exercise. He can move surprisingly fast should he spot a rabbit or other ‘prey’, and his good nose may also lead him astray and into trouble. A large and powerful dog who, while too sensible to directly engage a lion, is certainly capable of chasing, taking down and killing smaller game, it is important to be aware of the presence of livestock if off-lead exercise is undertaken. The adult Ridgeback is a good hiking or jogging companion and can do well in the canine sports of tracking and agility. Puppies should have very little formal exercise. Their vulnerable joints and bones need time to mature if painful and irreparable damage is to be avoided.

Obedience training, to at least basic level, is necessary in order that this powerful dog is responsive to verbal commands. If he is to walk politely on the lead and not to jump up at people then voice control is a must as, in any contest of strength, his handler will fare worst. The Ridgeback is a very trainable breed. He is smart and will be eager to work if positive methods, which reward good efforts and a job well done with treats and sincere praise, are employed. Negative training which involves harsh physical and verbal ‘punishment’ will have negative results. The dog may obey but, if he does, it will be out of fear rather than the desire to work with you and the bond of trust, respect and affection, which is the cornerstone of the relationship between dog and handler, will be severely damaged. Socialization should be commenced as soon as possible. The pup that has been accustomed to various people, animals, sights and sounds will be prepared to face with equanimity anything that he encounters in his life. The well trained, well socialized Rhodesian Ridgeback will be a confident, trustworthy dog of whom to be proud.

Some photographs of the Rhodesian Ridgeback... 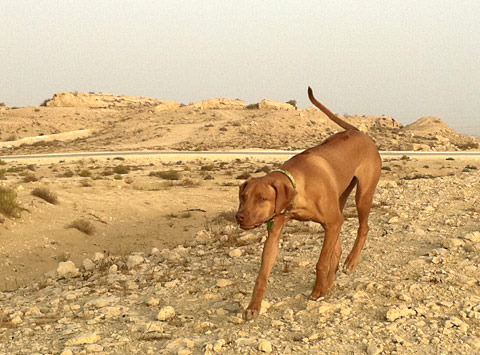 This is truly the best dog I have ever owned. She is intelligent, loyal and loving. She is "pet quality" as she has a double crown on her ridge, but I wouldn't have it any other way. She is perfect to me <3 Love, Love LOVE this dog and this breed. 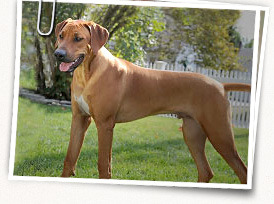 If you have any suggestions or if you think you’ve spotted an error, please let us know in our Rhodesian Ridgeback forum.