The Saluki is also known by the names: Persian Greyhound, Royal Dog of Egypt.

It is suggested that the Saluki (also known as the Gazelle Hound or Persian Greyhound) may have originated in Syria whence it spread to other Middle Eastern areas and Afghanistan. It almost certainly pre-dates the tombs and artefacts of the ancient Egyptians which depict dogs of similar type and, according to some sources, the Saluki may have graced history with its presence for more than 9000 years. While it is not possible to pinpoint accurately either the time or place of its origin it is undoubtedly one of the most ancient of breeds whose form and function have changed little across millennia. The dog was, and still is, a prized and highly valuable asset of the nomadic Bedouin. The proscription against dogs among Moslems was set aside for the Saluki who was regarded as a gift from Allah. It was accorded the title of ‘the noble one’ and, valued for its perfect beauty, its ability to hunt and supply food, its speed and stamina, the Saluki was considered family with careful records of dogs and breeding having been kept for centuries. One of the ultimate running machines of the canine world the task of the Saluki was to work with a hawk, coursing with breathtaking speed and agility to bring down gazelle and hare over rough, inhospitable terrain. The breed was not seen in Britain until the mid to late 19th century and received Kennel Club recognition in 1923.

Through the ages the Saluki has proved himself to be faithful companion in the home and on the hunt. He has a rather aloof and reserved attitude to strangers and tends to be quietly affectionate rather than demanding or effusively demonstrative with his family. However, while he is not one to wear his heart on his sleeve, once he has given that heart it is yours for life. He needs to be accorded a place in the family and to be permitted the privilege of sharing your home and hearth. Being dog of the desert, with a thin skin and a fine coat, he cannot tolerate cold very well and a lonely outside existence will cause him misery which, inevitably, will lead to behavioural problems stemming from boredom and lack of companionship. He is generally good with considerate children being quite gentle and docile, but the adult Saluki is probably too restrained to be an ideal playmate. As he has a highly developed hunting instinct and prey drive secure garden fencing is essential, and care must be taken with other small domestic pets and wildlife. His slender, almost fragile, appearance and somewhat wistful expression belie a dog that is physically very hardy, but he is also emotionally sensitive and may be quite highly strung so he needs a harmonious home environment in order to thrive. Tensions and raised voices will stress him and cause him anguish. Although his elegance, symmetry of form, his wise, far-seeing eyes and his innate dignity are so pleasing he is not the dog for everyone - much research into the breed should be undertaken if the Saluki is being considered as a family companion.

The Saluki requires a considerable amount of exercise to keep him fit and trim and to provide mental stimulation. Long daily walks are a necessity, whatever the weather. If a safe, enclosed area can be found for off-lead exercise then he will be delighted to be allowed to run and stretch his legs, and you will have the great pleasure of watching him move as nature intended with long, flowing strides devouring the ground. It must always be borne in mind though that this is a sight-hound and, should he spy potential prey, he will be off at astonishing speed deaf to all commands or entreaties to return and blind to all hazards. The sport of lure-coursing would be the ideal way of providing him with the running he needs in a safe location. Exercise for the growing puppy should be closely monitored as stress from jumping, hard running and rough play can seriously, and permanently, damage developing bones and joints.

Being an independent and intelligent dog the Saluki can present some training challenges, but it is essential that at least basic obedience training is undertaken in order that he should be an agreeable companion and socially acceptable. He is very sensitive to correction therefore harsh physical or verbal discipline should never be used. Such methods are very likely to cause him to become timid and nervous and to obey out of fear rather than out of respect and affection. He may even ‘shut down’ completely for fear that anything he does will be wrong and therefore punished. The best results are achieved with positive methods by which his learning is reinforced and rewarded with treats and sincere praise. Calmness, consistency and patience will bring out the best in him. Socialization should be started early in the pup’s life. Introducing him to various people, other dogs and novel sights and sound will prepare him to take his place in the world as a confident, courteous, level-headed adult.

Some photographs of the Saluki... 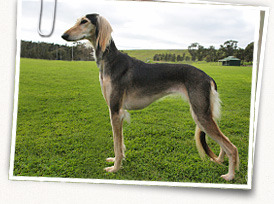 Smooth, soft, silky. May have feathering on legs, backs of thighs and throat

Any colour or combination of colours, except brindle

If you have any suggestions or if you think you’ve spotted an error, please let us know in our Saluki forum.