The Segugio Italiano is also known by the names: Italian Hound, Segugio.

The Segugio Italiano is an old breed whose likeness is to be found in ancient sculptures and in Italian Renaissance works of art. Also known as the Italian Hound it is believed to have developed in Italy from Phoenician sight-hounds and the Celtic hounds of southern Gaul. The addition of Mastiff blood to the lithe sight-hound stock produced a dog of more substance with the ability to work quarry by scent as well as sight. Wild boar were the traditional target of the Segugio but the end of the great hunts saw the numbers of pure-bred dogs decline. Interest in the breed was revived in the 20th century. Careful breeding built up the numbers and the Segugio is now extremely popular in Italy both as a hunting partner on a variety of game and as a companion, but it remains rare and relatively unknown outside its native land.

This is a kindly, affectionate dog who can be a most rewarding companion both for families and individuals. Centuries of close association with people has resulted in a sociable and even-tempered fellow who is generally reliable with children and who gets along well with other dogs. As with most hounds he thrives on companionship and he enjoys the comforts of home. He needs to be regarded as one of the family and not shut out in the yard or left alone for long periods of time. If deprived of company and interaction with his people he will become bored and miserable, with consequent behavioural problems such as digging, escape attempts and nuisance barking - and his lovely voice may seem less than harmonious to neighbours. He is quiet indoors but is a good watchdog who will announce the presence of strangers. Gardens must be securely fenced as he has a strong hunting instinct which is triggered by both the sight and scent of ‘prey’ which he will pursue with single-minded determination. The gentle Segugio is a sensitive dog who will be distressed by tensions and loud arguments within the home and will be particularly upset should he be the focus of anger. This breed is probably best suited to country living.

The Segugio Italiano requires a considerable amount of exercise. In his native environment, performing the task for which he has been bred for centuries, he can hunt without flagging for twelve hours a day, day after day, across rugged terrain and through thick cover. As a companion dog he should have long walks every day, no matter what the weather may be, in order to keep him physically fit and to keep his mind alert and active. Caution is needed with off-lead exercise lest his drive to hunt should lead him into trouble, but if a safe area can be found he will delight in the opportunity to gallop around and investigate interesting scents. The canine sport of tracking is an excellent way to provide an outlet for his energy, to engage his mind, and to allow him to use his superb nose. He will also enjoy swimming and retrieving games.

Obedience training to at least basic level should be commenced at a young age. The Segugio is an intelligent dog, happy to learn and eager to please. He can be a little stubborn at times, particularly if he sees no point in what he is asked to do, but this can be overcome by keeping training sessions short, fun and interesting for him. Patience, consistency and quiet firmness will help him quickly to learn what is required and what is inappropriate. Harsh methods which rely on strong physical and verbal corrections are unnecessary and have no place in his training. This gentle dog should be trained in a considerate manner with rewards of treats and/or genuine praise for good efforts and a job well done. Socialization should also be started as early in the pup’s life as possible. By introducing him to many various people, other dogs, new sights and sounds he will grow to be a well-mannered, sensible, friendly adult.

Some photographs of the Segugio Italiano... 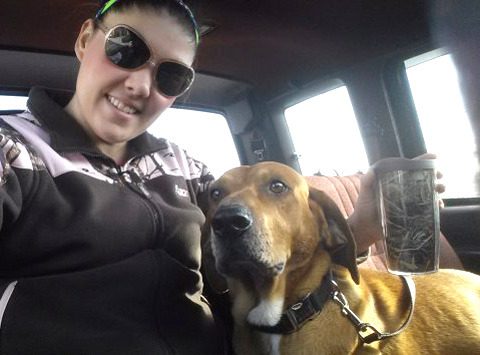 Bo Duke, owned by Alexa in Bluffton, IN , USA

I Adopted Bo Duke in November 2013 from the shelter in my town. He is a loving dog and is always welcoming me when I get home from work. He Loves Tractor Rides!!! He is my lovable (not so little) baby boy!! For more info and photos, see Bo Duke's thread in our forum.

Black and tan, deep red to wheaten. May have white marking on head, chest, feet, tip of tail

If you have any suggestions or if you think you’ve spotted an error, please let us know in our Segugio Italiano forum.