The Tibetan Mastiff is also known by the names: Do Khyi.

The Tibetan Mastiff is an ancient breed dating back at least 3,000 years and is one of the progenitors of many of the large Mastiff-type dogs of today. The primitive nature of the breed is evident in the fact that the bitch has only one oestrus per year rather than the two of the more ‘domesticated’ bitch. As the name suggests, this breed was developed in Tibet. Occasionally used for herding and livestock protection its primary task was to guard homes, monasteries, villages and livestock. To encourage fierceness and aggression these dogs usually spent their entire lives from the age of two months chained up beside the homes they were required to guard, hence the Tibetan name Do-Kyi (gate dog/tied dog). The breed almost died out in Tibet during the early 19th century but was rescued and revived by British fanciers. In 1847 Queen Victoria received the gift of “a large dog from Tibet” and in 1873 the Tibetan Mastiff was classified under that name by the Kennel Club. The first standard for the breed was adopted by the Kennel Club in 1931. It is a rare breed both in its homeland and in the West.

A loyal companion, gentle and affectionate with family members, the Tibetan Mastiff also has an independent and rather aloof nature. He can be extremely suspicious and wary of strangers. He will alert to intruders and his instinct to guard makes him quick and fierce to defend home and family from any perceived threat. Although he is physically suited to living outside he will be far more contented if allowed inside and accepted as one of the family. It is particularly important that he should be permitted to sleep inside at night as he has been bred for centuries to patrol the dark hours and bark. If he is indoors then he will settle quietly and sleep through the night. Tibetan Mastiffs are very slow to mature. Generally males reach full maturity at 4 -5 years and bitches at 3 - 4 years. This breed can test experienced owners and is not recommended for the novice.

The adult TM requires moderate exercise. His preferred activity is simply to lay around seemingly totally relaxed, but always alert for any untoward event. Running about playing ‘fetch’ or chasing balls is not his style. However, a steady walk of 40 - 60 minutes daily will keep him physically fit and his mind active. Exercise for the growing puppy needs to be carefully monitored as stress from jumping, hard running and rough play can seriously and permanently damage developing bones and joints.

This is a strong-willed dog accustomed to using his own initiative and relying on his own judgement which can make training somewhat of a challenge. However, basic obedience training is important in order that the owner has good verbal control over the dog and that the dog develops good canine manners and respect for his owner. Firmness, fairness and consistency together with reward-based positive reinforcement will bring out the best in him. Harsh methods are unnecessary and counter-productive and will result only in a cowed and mistrustful dog who lacks any affinity with his handler. His nature tends to make him too much of an independent thinker for such activities as organized agility, competition obedience, and other dog sports. Socialization with people, other dogs and a variety of situations is necessary to ensure that the dog does not develop any fearfulness or undue aggression.

Some photographs of the Tibetan Mastiff... 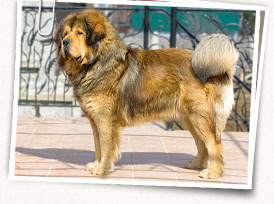 Black, slate grey, with or without tan, golden

If you have any suggestions or if you think you’ve spotted an error, please let us know in our Tibetan Mastiff forum.