The Whippet is also known by the names: English Whippet, Snap dog.

Dogs similar to Whippets are depicted on ancient artefacts and in 12th and 13th century works of art but it is believed that the Whippet of today originated in Britain around the middle of the 19th century. There is no documented evidence of its development but the most widely accepted theory is that it derived from the crossing of Greyhounds, small terriers and Italian Greyhounds. Known as the poor mans greyhound it was a very popular rabbit courser and racing dog among the working class of northern England who could not afford to maintain a large Greyhound. The Whippet has been described as the ultimate sprinter. With its sleek, aerodynamic form and strong legs it is able to accelerate fast and cover a short distance at speeds in excess of 60 km/h (37 mph). It is also extremely flexible and agile, easily following the twists and turns of its quarry with no diminution of pace. The natural elegance, convenient size, and sweet nature of the Whippet has ensured it popularity both as a show dog and family pet. The breed was first recognized by the Kennel Club in 1891.

The charming and graceful Whippet is an excellent companion. He is quiet and calm in the home and is as neat and fastidious in his habits as a cat. He bonds closely with his owners and his devotion should be repaid by making him a true member of the family. Being with you whatever you are doing is his joy, and being isolated in the backyard or left alone for long periods of time will cause him great anguish. His thin skin and fine coat mean he is not able to tolerate cold weather so he must be an indoor dog with a warm bed to go to and when out walking should wear a coat in inclement weather. Apart from sensitivity to low temperatures the adult Whippet is not as fragile as he may appear. He is a robust, resilient dog and, despite the fact that he may shiver occasionally, he is quite fearless. He will stand his ground if challenged and will readily chase, tackle and kill cats and other small animals, so care must be taken that he does not have the opportunity to do so. Household cats that he is familiar with are usually safe from his attentions and, in general, he gets along well with other dogs. He is good with considerate older children but is not suited for rough play or teasing. Whippet puppies in particular need very gentle handling. With strangers he can be a little reserved. He will announce their presence on his territory and attempt to protect home and family should he deem it necessary, but he is basically a friendly fellow who enjoys attention and admiration from those he trusts. Because of his inherent tendency to chase anything small and moving gardens need to be well fenced to prevent him getting out and being lost or injured. Amiable, intelligent, faithful, and possessing streamlined good looks the Whippet is deservedly one of the most popular companion and show hounds.

The Whippet will be quite happy to sleep and laze away the day but for his physical and mental well-being he should have brisk daily walks whatever the weather. Being a sight-hound with the propensity to chase potential prey without regard for roads or other hazards, caution is needed when it comes to off-lead exercise. If a secure area can be found for him to run free a few times a week it will give him great pleasure and be of great physical benefit. Games such as chasing a ball or frisbee and the sports of agility, flyball, lure coursing and racing will keep him fit and mentally stimulated.

Known for his intelligence and eagerness to please the Whippet is not difficult to train if there is a rapport between dog and owner, and many Whippets perform well at the highest levels of competition obedience. All training should be based on positive reinforcement methods which reward effort and compliance with treats and praise. Harsh methods which involve manhandling and angry reproofs should never be used as these will cause fear and nervousness and will quickly erode the bond of trust and affection which is the foundation of successful training. Socialization should be commenced at an early age by introducing the puppy to as many various people, places, situations and other animals as possible. Adequate training and socialization will prepare the dog to take his place in the home and in society as a confident, friendly, well-mannered representative of his breed.

Some photographs of the Whippet... 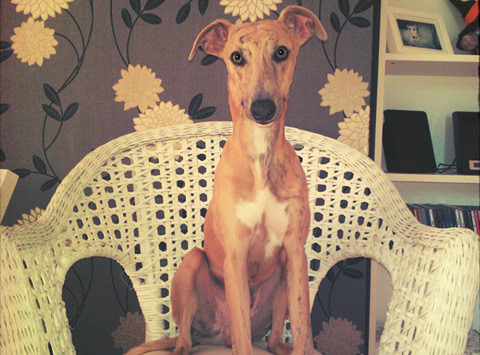 Blue is a very loving and comical member of our family, he loves nothing better than his own reflection. He enjoys runs along the beach but also snuggling up in bed. He's a top dog! 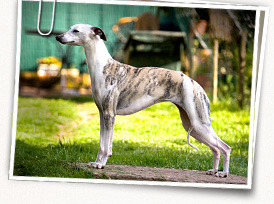 Any colour or mixture of colours

If you have any suggestions or if you think you’ve spotted an error, please let us know in our Whippet forum.