The Australian Shepherd is also known by the names: Aussie.

The Australian Shepherd does not, as its name suggests, originate from Australia, but the Basque region of the Pyrenees Mountains between France and Spain. Having travelled to Australia with herders, it wasn't until the herders arrived in the western parts of the US that the breed was given the Australian Shepherd name, and consequently improved and perfected. The breed remained relatively unknown until the early 1950s when there was a rise in the popularity of rodeos and all things Western, giving the Australian Shepherd a chance to show off his herding skills, perform a few tricks and to wow people with his charming good looks.

This intelligent and highly energetic breed has won many friends, excelling at agility, obedience, tracking, as well as of course herding - whether that's cattle, sheep, horses, other dogs or even groups of children! With champions in the breed ring, obedience and working trials, this likeable, smart, good natured and highly trainable breed would be a wonderful addition to an active and experienced home. He is kind and loving to his family but can be cautious of strangers, and may display some guarding tendencies. While Australian Shepherds can be calm and easy going, he is most happy when given a job to do, otherwise will almost certainly invent his own games - which some might interpret as hyperactivity. Truth is he is intelligent and active and needs an appropriate outlet... and given one he will truly shine.

The Australian Shepherd requires an active household, with at least two hours of exercise a day. Taking up a sport such as agility or obedience is highly recommended - this is an intelligent and energetic breed that needs both mental and physical stimulation, or he may conjure up his own games to keep himself occupied, some of which could be destructive. Ideally suited to a home in the country where he'll have lots of things to occupy his mind and plenty of space to burn off his boundless energy.

The Australian Shepherd is a smart, alert breed that is eager to please, quick to learn and fast to carry out commands once he understands what is required. Basic obedience training should be commenced as early as possible in order that he should be pleasant to live with, manageable, and acceptable to the community. All training should be carried out using positive reinforcement with treats and praise as rewards for accomplishments. Harsh physical and verbal corrections will serve no purpose, other than to cause resentment and a breakdown in trust and respect, and such methods will slow the learning process and bewilder the dog to the extent that he may ‘close down’ and refuse to do anything for fear of making a mistake. With patience, kindness, and benign firmness the Australian Shepherd can be trained to the very highest levels of competition obedience.

Some photographs of the Australian Shepherd... 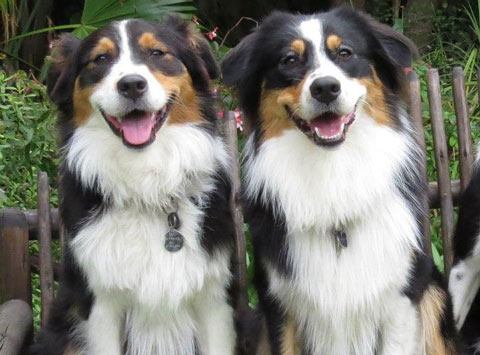 Enzo (on right) is very busy and will play all day if he could. He loves any toy/object to play with. He is in obedience and agility training. Indy is a bit quieter than Enzo but is still a wild child when she's in the mood. She loves back scratches and chasing her ball.

Blue merle, black, red merle or red. With or without white markings and/or tan points.

If you have any suggestions or if you think you’ve spotted an error, please let us know in our Australian Shepherd forum.