There is no consensus of opinion among researchers as to the exact origin and development of the Beagle. Small pack hounds of Beagle type are depicted on ancient Greek artefacts and similar dogs are believed to have been used for hunting during the Crusades. The progenitors of the modern Beagle may be Talbot Hounds, brought to England by William the Conqueror in the 11th century from which developed the Southern Hound which in turn produced the Beagle and Foxhound. Other theories posit that Beagles were bred down from Foxhounds or that they are the result of introducing Terrier or Spaniel blood into Foxhounds or Harriers. The origin of the name itself is moot, suggestions being Celtic ‘beag’; French ‘begles’; Norman ‘beigh’; Old English ‘begele’, all of which translate as ‘small’, or French ‘begeule’ meaning gape throat - a reference to the baying voice during pursuit. Early manuscripts also refer to Glove Beagles and Pocket Beagles - dogs barely nine inches high which could be carried in the hands or in a huntsman’s coat pocket or saddlebag. Very popular as working packs during the reigns of the Tudor monarchs Beagles later lost ground to the Foxhound and it was not until 1830 when the Rev. Phillip Honeywood took an interest in the breed that hunting with Beagle packs regained its former popularity. Beagles are generally followed on foot and they hunt singly, in a couple, or in a pack, their primary quarry being rabbit and hare. The breed also has a somewhat controversial history as a research laboratory dog, favoured for this role due to its convenient size, its acceptance of kennelling and its reliable temperament. The Beagle’s outstanding scenting ability and unthreatening appearance has made it one of the ‘sniffer’ dogs of choice for the detection of narcotics and agricultural products by law enforcement agencies and quarantine officials around the world.

The adjective most commonly associated with the Beagle is ‘merry’ and his happy outlook on life, his cheerful good nature, his boundless enthusiasm for any activity in which he is invited to participate and his almost constantly wagging tail make it a most apt descriptor. It is important to realize that he is a pack animal. He is not cut out to be a ‘one man’ dog and he will bond readily and equally to all members of the family. His pack heritage also means that he needs a great deal of companionship and attention from people and/or other dogs and he should be included in as many family activities as possible. If he is deprived of company he will be lonely, bored and unhappy and will express his misery by baying and seek to alleviate his boredom by destructiveness and attempts to escape the confines of his yard. He is a scent-hound through and through so gardens must be securely fenced otherwise he will surely find any weak spot and will follow any interesting smell that may catch his nose. Once out he will follow a scent with utmost determination, not stopping for roads, railways tracks or anything else and may become lost, stolen, injured or killed. His amiable, unaggressive temperament has earned him the title of “the gentleman of the canine world”. He will invariably get along well with other dogs and is friendly to, and trusting of, people and very good with children. He is bold and will alert to strangers by barking but should never offer a threat of attack. This inquisitive, busy, intelligent dog of exceptional temperament is a first-rate pet for those who understand, and are willing to work with, the innate traits of a hound.

An adult Beagle needs a considerable amount of exercise to keep him physically fit and mentally alert. He has generation upon generation of dogs behind him born to work a full day in the field so he needs at least two brisk, interesting walks every day and if the opportunity presents to allow free running in a secure area this should be taken advantage of. It is unwise to allow off-lead exercise unless he is well trained to recall, and even then he is still inclined to be ruled by his nose - once he gets a scent and the hunting drive is fired he may well become deaf to commands to return. Games to satiate his questing mind and fulfil his needs for company and a good work-out are recommended. He excels at the sports of tracking, agility, flyball, and is an impressive field trial dog. He is also a superb therapy dog and visiting the elderly or unwell will provide the duel benefits of giving him mental stimulation and comforting/entertaining his ‘clients’.

All dogs should receive at least basic obedience training to enable them to become a pleasure to live with and good ambassadors for their breed in the wider community. The Beagle is a dog of high intelligence with a good heart and a willingness to please. The majority are very motivated by food so reward-based training should achieve success. Harsh verbal or physical corrections are unnecessary and will result in a confused, anxious dog and the weakening of the bonds of respect and trust which are the foundation of the dog-human relationship. Cognizance should be taken of the Beagle's natural instinct and, rather than punishing him for sniffing the ground, he should be rewarded for paying attention. Beagles learn quickly and have competed with distinction at the highest level of obedience trials. Socialization which is the process of introducing the dog from a very young age to all manner of people, places, situations, other animals, etc. is vital to ensuring that the puppy grows to be a well-mannered, confident, adult of equable temperament and a credit to his breed.

Some photographs of the Beagle... 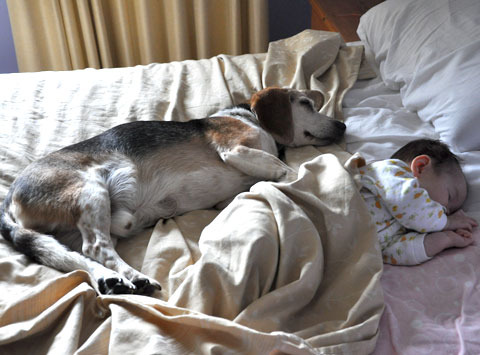 Dimitri, owned by Andrew in Waterloo, Ontario in Canada

We adopted Dimitri as a puppy when he arrived at a vet clinic untagged and suffering from injuries from being hit by a car. We nursed him to health and he lived to a ripe old age of 15. He passed away in July, 2014. 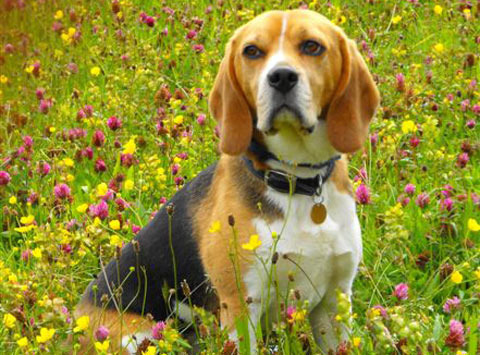 Eddie, owned by Carole Cottrell in Stoke on Trent, UK

Eddie (Final Edition at Helidale CD Ex) is a rescue dog and I certainly wouldn't say he is show quality, but he is a handsome boy and does compete in both Working Trials and Obedience. He sometimes has his own take on an exercise, (well he is a Beagle), but he makes people smile and does have flashes of brilliance. He also does Heelwork to Music, but that's just for fun as his Mum can't dance. For more info and photos, see Eddie's thread in our forum. 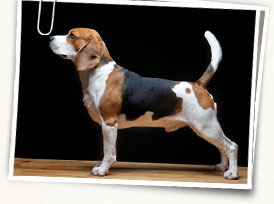 If you have any suggestions or if you think you’ve spotted an error, please let us know in our Beagle forum.