The Belgian Shepherd Dog is an old breed that comes in four varieties bearing one obvious difference - coat, which varies in colour, texture and length. While these sheepdogs have been around in Belgium since the turn of the fifteenth century, it wasn't until 1891 when professor Reul of the Belgium faculty of veterinarian sciences isolated and recognised three main types as the Belgian Shepherd - the Groenendael, the Tervuren and the Malinois, with the Laekenois owing its existence to enthusiasts in France and Holland. They were used primarily as herding dogs that guarded flocks in Belgium and other European countries but it wasn't until they were beginning to be put out of work by advances in fencing and vehicles that professor Reul got together with enthusiasts to preserve and name the breeds. It is said they agreed on everything but type of coat and its colour hence the four varieties. The names were given based on the areas of Belgium they came from, while the Laekenois took its name from the royal residence of Queen Marie Henriette, the Château de Laeken - because the Laekenois was her favourite variety.

Highly intelligent and trainable, this alert, courageous and devoted breed is observant, protective, vigilant yet not shy nor vicious or aggressive without provocation. Belgian Shepherds have been successfully used in wars and the police since the 19th century, and later as guard and watch dogs - never quarrelsome with customers unless the establishment has locked up for the night, in which case would-be prowlers ought to be on guard. Although affectionate with their family, they require experienced owners being intelligent, confident, possessive and sometimes dominant. They are vigilant and interested in all around them, and will be most happy in a home that can provide ample jobs and involve them whenever possible. As the breed has progressed the Malinois (in particular those bred from working lines) has developed some characteristics of his own - much like the difference between working German Shepherds and show bred German Shepherds. He's that little bit more alert, tenacious and eager to react - therefore should only go to an experienced home with plenty of experience working with such lively dogs. Don't say you haven't been warned, Mals often end up in rescue as they are too much to handle for inexperienced owners.

A true working dog, the Belgian Shepherd requires a considerable amount of exercise and it is important to find a suitable outlet for his energy. Long walks, jogging, free running in a secure area, obedience exercises, agility, frisbee, Schutzhund, tracking, and other hard working canine sports (in which the breed has proved itself many times) will meet his need for physical and mental activity. An active household is a must - these dogs need to work off their unflagging energy or may become destructive.

The Belgian Shepherd is extremely intelligent and his willingness to work along with his eagerness to please make training a pleasure. He also has an excellent memory which serves him well, so well that he may appear to read his handler’s mind. Early socialization is of great importance, as is obedience training. Confident, firm but kind handling is the key to bringing out the best in this bold and exceptionally clever breed. Socialization is important in producing a well-rounded dog who is at ease with a variety of people and other dogs and animals.

Some photographs of the Belgian Shepherd Dog (Tervuren)... 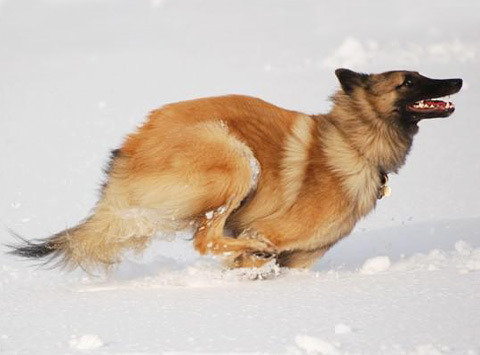 Anja... darting through the snow! 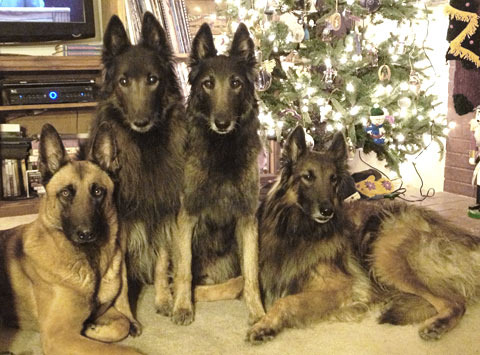 Here is a Christmas photo of all 4 of our Belgians - the dog to the left is a Mal (Jacques Rieur) who can also be seen on the Malinois page. 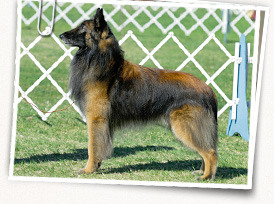 All shades of red, fawn and grey with black overlay.

If you have any suggestions or if you think you’ve spotted an error, please let us know in our Belgian Shepherd Dog (Tervuren) forum.