The Bolognese, also known as the Bichon Bolognese, is a member of the Bichon family and takes it name from the Italian city of Bologna where, as far back as the 14th century, the small, white ancestors of today’s Bolognese were highly favoured as companions among the aristocracy and nobility. Their spread through Europe was considerably aided by their being presented as gifts to esteemed visitors to the royal courts of Italy, Spain, France, Belgium and Austria. The Bolognese enjoyed great popularity for several hundred years but with the decline in power of various royal and noble houses came a decline in the popularity of the breed. Numbers dwindled to the point of near extinction, the breed being kept viable by the efforts of just a few breeders. It was not until the 20th century that the Bolognese was ‘discovered’ and imported into the U.S.A. and Britain. In 1988 the Kennel Club registered the first litter of Bolognese - the breed being removed from the Imported Register in 2001. This is still a rare breed throughout the world, even in its homeland.

Bred for hundreds of years as a companion dog the Bolognese bonds extremely closely with his family and needs to be with them and included in as many of their activities as possible. He thrives on attention and affection and will repay these with his own love and devotion. He is not a dog to be ignored, shut away, or left alone for long periods as he will become despondent and anxious and may resort to destructive or noisy behaviour to express his distress. While he may not be as dynamic and ‘busy’ as some other small breeds he can be very playful and vivacious with those he trusts. With strangers he is generally quite reserved but he is not a yappy snappy dog, just slightly stand-offish and tending to reserve his judgement rather than demanding attention and petting. He is a good watchdog as he will bark to alert to anything that he deems to be amiss and he is reputed to be a good judge of human character. He is generally reliable with older, careful children and usually gets along well with other dogs. Being an intelligent fellow he can be quite enterprising when it comes to getting his own way but it is important that, from the outset, he is kindly but firmly taught the rules of the household. This loyal, loving little dog admirably fulfils his function as a steadfast friend and companion.

The Bolognese does not require a great deal of exercise. Playing in the house and garden will be almost sufficient to keep him physically fit and active, but in addition he should have a daily walk to provide him with new sights and scents which will interest him and keep his mind stimulated. He will also be quite happy to trot along on fairly long excursions. If his recall is reliable then he may be allowed the pleasure of running around freely and exploring off-lead in a safe area.

Basic obedience training is necessary to ensure that the Bolognese is an agreeable member of the family and acceptable to the community. He is quick to learn and eager to please therefore training should not be a problem. The best results will be achieved by using food and praise to reward and reinforce the desired behaviours. He will not respond well to harsh handling or an angry voice. Using such tactics will slow down learning and will erode the foundation of trust and respect upon which all successful training is based. It is important that socialization should commence as early as possible. By accustoming the puppy to various people, animals, and situations he will grow in confidence and any tendencies towards shyness, timidity, or over-wariness of strangers will be reduced.

Some photographs of the Bolognese... 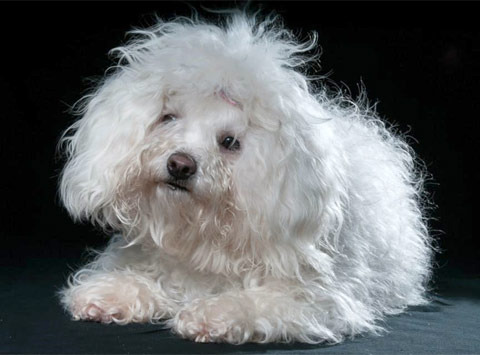 Bella is quiet and chilled out, except for her love of chasing cats and birds. She also loves mud! For more info and photos, see Bella's thread in our forum.

If you have any suggestions or if you think you’ve spotted an error, please let us know in our Bolognese forum.