The Boston Terrier is a relatively recent breed and its development is well documented starting from a dog owned by Robert Hooper of Boston, Massachusetts. This dog, known as Hooper’s Judge, was a cross between the Bulldog and the now extinct English White Terrier. The mating of Judge to the white bitch, Burnett’s Gyp, produced Well’s Eph who, in turn, was mated to Tobin’s Kate producing Bernard’s Tom. These dogs were the foundation of the breed and further selective in-breeding succeeded in fixing type. It is suggested that the careful introduction of French Bulldog and Bull Terrier blood also contributed to the development of the Boston Terrier. The early dogs were used primarily as ratters and for dog fighting which was a popular ‘sport’ of the time, but when pit fighting became illegal the ‘Boston Bulls’ found their niche as companion dogs. The first breed club was formed in the U.S.A. in 1891.

In personality and temperament the Boston Terrier is a fine family companion. He has a kind and gentle disposition coupled with a bright intelligence and lively nature. He loves life and loves spending time with his family and being included in as many activities as possible. This need to be with his people, plus his sensitivity to heat and cold, means that he is definitely an indoor dog and will suffer both physically and mentally if consigned to a lonely outdoor existence. He is also very mood responsive and will quickly pick up, and be affected by, atmosphere within the family whether it be happy, sad, tense, etc.. Despite his small size and general affection for people the Boston is a dependable watchdog. He is always alert and ready to warn of ‘intruders’ into his territory and will bravely endeavour to protect home and family from any perceived threat. The historical background of the Boston Terrier means that he may have a tendency to pick a fight with other dogs - he will certainly take on any challenge and is usually quite able to take care of himself in a fracas if necessary. Small, high-spirited and robust, Bostons fit well into families with children, but Boston puppies are very small and fragile so great care must be taken that they are not accidentally injured during play or cuddles. With his dapper appearance, stable temperament, adaptability, low maintenance requirements, and loving nature it is not surprising that the Boston Terrier is one of the most popular dogs in the U.S.A.

The Boston Terrier is a very active breed but physical exercise requirements are only moderate. Regular walks are essential for good health and to keep the mind active but care must be taken not to over-exert the dog. The short muzzle means that the Boston is likely to experience breathing difficulties if he has too much vigorous exercise or becomes over-heated. Walks and running around in the heat of the day is to be avoided. A very inquisitive breed Bostons get a lot of exercise from patrolling their boundaries and investigating their own backyards.

This is a highly intelligent breed. Most are rather strong-willed so training may prove somewhat of a challenge occasionally but they are very quick learners and respond to the positive reinforcement of good behaviour. Harsh physical or verbal methods will achieve nothing but fear and distrust and will severely damage any bond between dog and owner. Boston Terriers can do well in formal obedience and also can compete successfully in agility trials, but the caveat of over-exertion should be applied to both sports. One of the arenas in which they shine is as therapy dogs: small, friendly, and with those soft, expressive eyes they bring pleasure and hope to many. Early and on-going socialization is important in order that the dog becomes familiar with as many different kinds of people and situations as possible thus avoiding the risk of nervousness in adulthood.

Some photographs of the Boston Terrier... 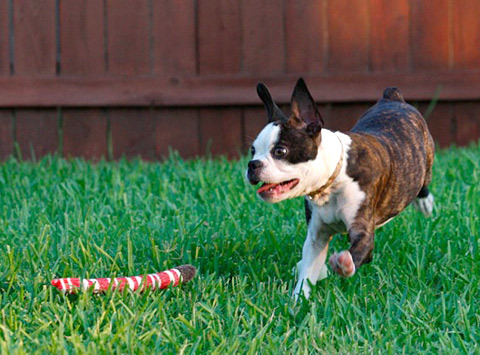 Bruiser, owned by Brittany O'Connell in Portland, Texas, US

Picture of Bruiser playing in the garden.

Pepper, owned by Jamie Giuliano in Corona, CA. US

Pepper is a 5 1/2 month old energetic and playful puppy. She loves to go on adventures and explore. Everyone is Pepper's friend! She is extremely friendly and very cuddly. She also is very smart, she already knows so many tricks and is learning more! 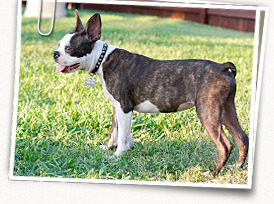 If you have any suggestions or if you think you’ve spotted an error, please let us know in our Boston Terrier forum.