As the name indicates, the Bouvier Des Flandres originated in south-west Belgium and northern France. The word ‘bouvier’ translates as cow-herder or ox-herder thus providing evidence of the breed’s original purpose. Not only a herder and drover of cattle, the Bouvier also functioned as the farmer’s guard dog, draught dog, and all-round helper. The devastation wrought on this area of Europe during World War I resulted in many of the dogs being lost. Of the very few that survived one dog in particular, owned by a Belgian Army veterinarian, was responsible for producing a number of offspring which themselves did much to save the breed from extinction. Today the breed has proven its versatility by serving as police and military dogs, trackers, therapy dogs, assistance dogs and, of course working farm dogs.

The well-bred Bouvier is a calm, even-tempered and sensible dog, and is an excellent and devoted family companion, but it does have certain inherent characteristics of which potential purchasers should be aware. Independent, strong-willed, and naturally dominant they require strong and consistent leadership, and if this leadership is not forthcoming they will readily take over the role of ‘boss’ themselves. As youngsters they can be very boisterous and their propensity for jumping and rough play may make them unsuitable for families with small children. The instinct to herd or drove can lead to chasing and nipping anything that moves, e.g. bicycles, joggers, cats, children, cars, livestock, etc. Their guarding instincts make them suspicious of strangers, formidable protectors of family and property, and an effective deterrent due to their rugged and imposing appearance. They have been described as “prudently aggressive”, which is taken to mean that they will bite if they deem it necessary in defence of family and property but are not indiscriminately aggressive towards people. Toward dogs, particularly dogs of the same sex, they can display dominant aggression. It should always be remembered that this is a serious working dog requiring no little knowledge and skill to manage correctly.

Bouviers need plenty of physical and mental exercise. Long daily walks, a large securely fenced exercise area in which to play and run will satisfy the body, and ‘thinking’ games and obedience training will stretch the mind. Swimming is an excellent exercise and most Bouviers enjoy water. As with all large breeds care must be taken not to over-exercise the growing dog.

It is essential that Bouviers receive early and on-going obedience training. Such training will channel their energies, drives, and intelligence in the right direction and result in a well-mannered companion. An eager to please breed, positive methods of training and absolute consistency bring the best results. Socialization from an early age is critical. Without correct socialization a Bouvier may become overly suspicious of strangers as it will have no yardstick by which to differentiate ‘good’ from ‘bad’ - which may result in ill-judged aggression. Lack of socialization can also lead to an uncharacteristic fearfulness and to inappropriate herding behaviours.

Some photographs of the Bouvier Des Flandres... 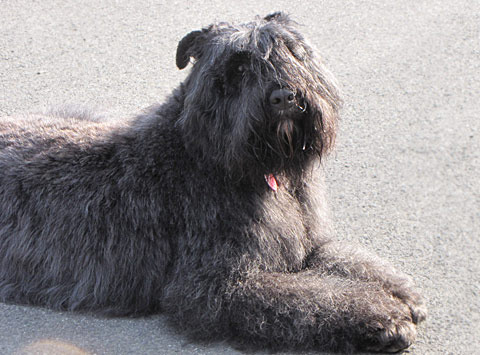 Cassie, owned by Steve in Alaska

From fawn to black, including brindle

If you have any suggestions or if you think you’ve spotted an error, please let us know in our Bouvier Des Flandres forum.