The Bullmastiff originated in England in the mid-19th century. The breed was developed by estate gamekeepers who required a large, powerful dog capable of deterring and, if necessary, catching poachers. By crossing the Mastiff and the Bulldog of the time they succeeded in producing a fearless, tenacious dog that was agile and fast enough to pursue a fleeing poacher, and strong enough to bring him down and hold him without mauling until the gamekeeper arrived. Thus arose the early name for the Bullmastiff: the ‘Gamekeeper’s Night Dog’. The Bullmastiff was first recognized by the Kennel Club in 1924

Bullmastiffs have been described as the “peerless protector” and, although loyal and affectionate to family and friends, they are wary of strangers until they have been introduced and the dog is assured that they present no threat. The fiercely protective instinct of the Gamekeeper’s Night Dog has been modified by modern breeding but they are still territorial and make superb watchdogs, always alert, brave, and rarely barking without good cause. As a guarding breed early and on-going socialization is vitally important in order that over-protectiveness or other antisocial behaviours do not become established. An even-tempered and devoted companion the Bullmastiff is an excellent family dog, but its size should be taken into consideration as small children can easily be knocked off their feet by a playful greeting.

As with all large breeds formal exercise should be limited until the dog has finished growing and is fully mature. Over-exercising the growing dog may cause joint and bone damage which can result in permanent lameness. Long walks, excessive running and prolonged play should be avoided until the dog is 18 - 24 months old. Adults need sufficient regular exercise to keep them in good condition.

Obedience training is important for any dog but essential for a breed as powerful as a Bullmastiff which, if not taught to walk calmly on lead, can easily tow an adult down the street. Although Bullmastiffs are intelligent dogs and willing to please they can sometimes be stubborn, but they usually respond very well to reward-based training and will quickly comprehend what is required of them. They can also be surprisingly sensitive so rough handling, shouting, or any other negative methods will not achieve the desired result. Socialization with a variety of people and with other dogs will do much to broaden the Bullmastiff's horizons and prevent shyness or aggression.

Some photographs of the Bullmastiff... 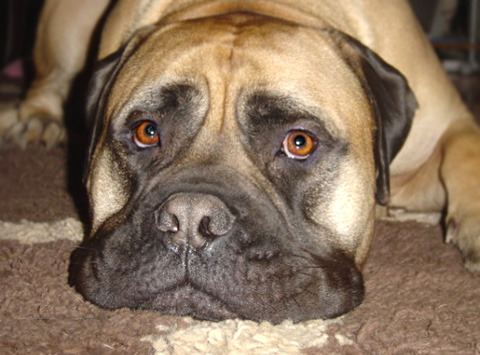 Phoebe is an amazing dog and I could not live without her. She doesnt follow the typicals of her breed as shes bigger than most females and also loves the sound of her own voice. Dont believe you will get what it says in the books, bullmastiffs are as unique as every human being. She has more energy than many large breed dogs and loves nothing more than to zoom around at 100 miles an hour even at the ripe old age of 7. Bullmastiffs are the peterpans of the dog world, they are puppies till the end. 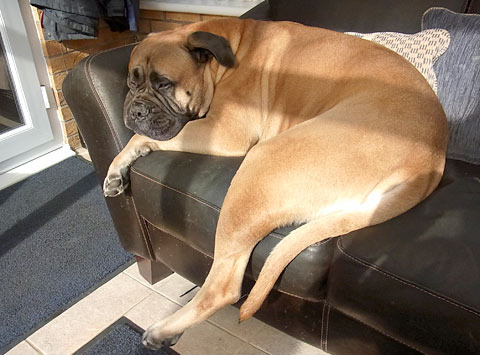 Dexter, owned by Ruth in UK

Dexter loves to be part of the family, he likes to go wherever you go - to bed, to bath, in the car and to the shops. The breed is very strong willed so proper training is essential, even with this Dexter can be extremely stubborn as are many Mastiffs! he moves when he wants, he walks where he wants and he can be so lazy. He has an amazing personality and facial expressions to match. Expect to give around 2 hrs per day walking time, he loves to run in long grass and is very nosey checking out everything. Dexter seldom barks - except at the hoover and is a great guard dog, they make great family pets and everyone comments on how handsome he is. 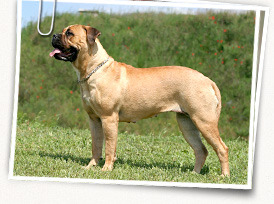 If you have any suggestions or if you think you’ve spotted an error, please let us know in our Bullmastiff forum.