The Dachshund, also known as the Teckel, is of German origin. The breed comes in six varieties differentiated by coat (Long-Haired, Smooth, Wire-Haired) and size (Standard or Miniature). The name Dachshund means ‘Badger Hound’. These small, long-bodied dogs were developed to control badgers, and later foxes, in country that was unsuitable for hunting on horseback. Their job was to go to ground and flush out or drag out the quarry or hold it at bay underground until it could be dug out and despatched. Badgers in particular are formidable opponents and it required a dog of immense courage and determination to go into a sett, face the sharp claws and teeth of the angry resident and be prepared to fight to the death. The physical form of the Dachshund was deliberately bred for and it is suggested that it was achieved by crossing a small French Pointer (the Braque) and the Pinscher to create the old Teckel which, in turn, was crossed with French Bassets to produce the Dachshund. The long, slender body enabled access to underground burrows and made manoeuvring in tight corners possible, the short, strong legs were perfect for digging and giving solid purchase in a fight or when dragging out large animals, and the very powerful jaws ensured a good grip and a damaging bite. The smaller specimens of the breed were very useful for prey such as rabbit, stoat and weasel. Dachshunds were also found to be extremely good at tracking wounded game such as deer and boar and flushing game from cover. The Smooth Haired is the oldest of the breed varieties. Dachshunds were first shown in Britain in the 1870s and became a popular breed until hostilities with Germany saw everything German fall into disfavour. In post-war years they regained favour and are once again widespread as pets and show dogs.

One of the most widely recognized of breeds the Dachshund is a delightful companion. Apart from his size everything about him is big, from his deep devotion to his family to his bravery and tenaciousness. He himself has every confidence that he is a big dog and will fearlessly defend his property and people from perceived threat and will never hesitate to take up a challenge thrown down by dogs much larger than himself. He is an excellent watchdog and guardian of his territory. Always alert to whatever is going on the presence of strangers is announced with a loud and ferocious barking out of all proportion to his size. With friends and family and with dogs that he knows he is a playful and mischievous character. This extroverted personality, combined with intelligence and an independent streak makes necessary an owner who will firmly but kindly set the boundaries of acceptable behaviour. Once trust and respect are established he will give his love and loyalty without reserve. In return all he asks is to be included as one of the family. He thrives on attention and companionship and is unsuited to being left alone in a yard for long periods of time. In such a situation he will become miserable and bored and may seek outlets for his frustration in destructiveness, barking, or attempts to escape. This breed is not recommended for families with young children as teasing is not well tolerated and inappropriate handling and rough play can easily cause spinal damage.

The Dachshund loves to get out and about and he requires what may be regarded as a surprising amount of exercise but the breed was developed for the endurance and tenacity to hunt for a full day. Dachshunds can put weight on very easily and obesity is one of the major causes of back problems in the breed so daily walks are a necessity to keep him trim and to keep his mind active. He will take delight in the opportunity to run and explore off-lead in a secure area, but it is unwise to allow him to roam at large as he will find it next to impossible to ignore tempting burrows and enticing scents. It is extremely important that he is not permitted to jump or to frequently negotiate stairs and steps as such activities can cause spinal injury.

Bold and assertive the Dachshund needs firm, fair and consistent training from an early age in order that he becomes a rewarding companion and socially acceptable. Failure to provide adequate training may result in a dog who has an over-inflated sense of his own importance. He is not a difficult dog to train being quick to learn and responsive to those who inspire respect and affection. Reward-based training using treats and praise will bring out the best in him whereas severe corrections will serve only to make him nervous and confused. Socialization should also be commenced as early as possible by introducing the pup to a wide variety of people, places, situations and other animals. This will overcome any tendencies towards nervousness or excessive wariness of strangers and will ensure that he matures into a sensible, well-adjusted adult.

Some photographs of the Dachshund (Miniature Smooth Haired)... 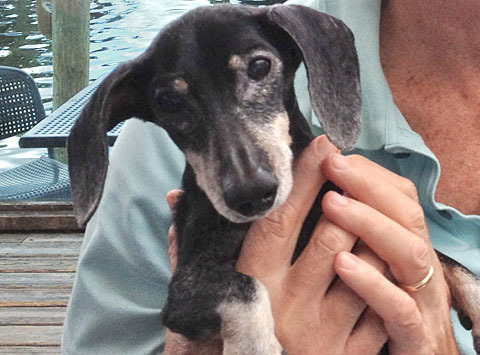 Katie, owned by Denise in Palm Beach Gardens, US

Katie is the best dog a person could ever hope to have. She has a lovable disposition, is quiet, and is the most gentle dog I have ever known. Although she loves to sniff and play, she is not a barker. She doesn't simply walk; she trots! People call her the "Little Clydesdale". She is the love of our lives. 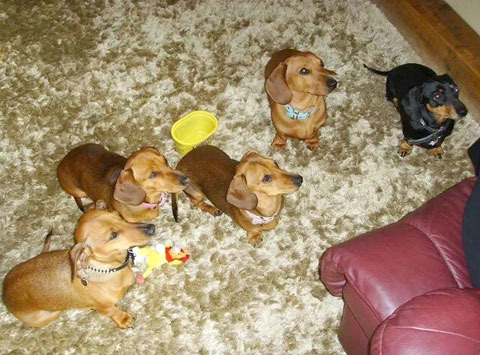 The best pack ever. All wanting a place on your knee. 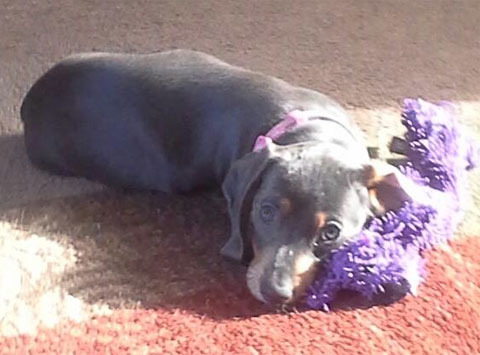 Here is Brena at about 7 or 8 weeks old - she's now 5 months old and is a wonderful little dog. For more info and photos, see Brena's thread in our forum.

All colours, except white, allowed. Dapples to be evenly marked.

If you have any suggestions or if you think you’ve spotted an error, please let us know in our Dachshund (Miniature Smooth Haired) forum.