The French Bulldog is also known by the names: Frenchie, Bouledogue Français.

Several theories exist regarding the origin of the French Bulldog, the most likely being that he is descended from small British Bulldogs. These ‘miniature’ bulldogs were bred in England during the 19th century and were possibly developed from the under-sized, tulip-eared rejects from regular Bulldog litters. The French connection was established when some of the lace workers of Nottingham migrated and settled in the Calais area with their Toy Bulldogs. These dogs were then apparently crossed with the French “terrier boule” - the dogs favoured by butchers and meat workers. The resulting small, sturdy dogs with their distinctive ‘bat’ ears became very popular with working class Parisian society and then with the artistic set and the upper classes. Originally bred for ratting and the ‘sport’ of bull-baiting, the French Bulldog has moved from fighter though fashion accessory to its present day niche as devoted companion. The breed was first recognized by the Kennel Club in 1902.

The rather pugnacious face and somewhat serious expression of the French Bulldog belie a jolly and vivacious character. Affectionate and possessed of an even disposition and infectious high spirits this compact little dog is a delightful family pet. He is always ready for a game and never does anything half-heartedly. He loves human company and must be included as part of the family if he is to thrive and his sparkling personality is to develop. Deprived of companionship he will become morose and is likely to exhibit inappropriate behaviours. His need for interaction is not the only reason why he must be an indoor dog, he cannot tolerate extremes of temperature so he is both psychologically and physically unsuited to a life outside. He is generally a very quiet dog rarely barking without good cause. He will alert to strangers approaching the home and, being of a courageous nature, may attempt to defend his territory if provoked. If you want an intelligent, brave, devoted dog that will intersperse short bursts of high energy activity with longer periods of relaxation on your lap or the sofa and who can make you smile every day then the Frenchie may be the breed for you.

The French Bulldog has modest exercise requirements. He needs daily walks to keep him fit and to provide mental stimulation but he is not suited to pursuits such as jogging or agility or other high impact exercises. Due to the construction of his airway he cannot effectively regulate his temperature so great care must be taken not to exercise a French Bulldog in hot and humid weather.

Basic obedience training is necessary for all dogs in order that they may learn how to behave, and thus be acceptable, in human society. The combination of intelligence and the desire to please means that the French Bulldog can be fairly easily trained and many go on to excel in formal obedience trials. They are, however, independent thinkers and can be stubborn if they see no point to an exercise. The key is to keep training sessions, short, interesting and fun for the dog. The only method that should be used is reward-based positive training. Harsh handling will erode the respect and affection which is the foundation on which obedience should be based. Early and on-going socialization to familiarize the dog with as many situations, people, things and animals as possible is essential. An adequately socialized dog will grow to be a well-mannered, confident, friendly adult.

Some photographs of the French Bulldog... 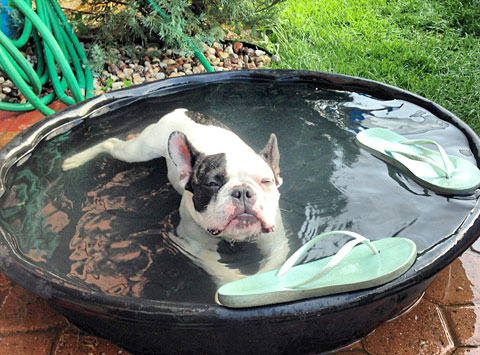 If you have any suggestions or if you think you’ve spotted an error, please let us know in our French Bulldog forum.