The German Pinscher is also known by the names: Deutscher Pinscher.

A descendant of the Rat Pinscher, which became extinct in the 1800s, the German Pinscher was primarily used in 19th century Germany as a stable dog, guarding property and killing rats and mice. The GP was officially recognized as a distinct breed in its country of origin in 1895. As with some other European breeds the German Pinscher did not fare well during the war years and by 1949 was almost extinct. The saviour of the breed was Werner Jung who, with two GP bitches and some over-size Miniature Pinscher studs, laid the foundations for the recovery of the breed. The German Pinscher played a significant role in the creation and development of the Dobermann and the Miniature Pinscher. Still regarded as a rare breed the German Pinscher is increasing in popularity due to its size, intelligence and pleasing personality.

Elegant dogs in both appearance and movement German Pinschers are high-spirited and lively with an even temperament and no little self-assurance. Possessed of a high degree of intelligence and a strong will, they can be assertive, willful, and manipulative, and therefore require a confident owner who can provide firm, consistent, and fair guidelines for acceptable behaviour. Many of this breed have a tendency to possessiveness over objects and/or owners and indications of potential problems should be adressed at an early stage. They are totally loyal to their family and thrive on being included in as many activities as possible. This strong bonding makes them unsuited to life as an outdoor dog as they need human companionship and interaction. If they are raised with children then there should be no problems provided that the children are taught to respect the dog and vice versa. Developed as a hunting breed the German Pinscher possess a high prey drive and has the instinct to chase and seize almost anything that runs which, combined with speed and fast reflexes, may have unfortunate consequences for local cats and wildlife. The GP is an outstanding watchdog. Always observant, and inclined to be wary of strangers, he will loudly warn off, and alert you to, any intruder or potential threat to home and family.

The German Pinscher is a very high energy breed capable of working tirelessly for hours in its traditional role of vermin hunter and killer. As a companion dog this energy must be given suitable outlet if boredom and consequent destructiveness and nuisance barking is to be avoided. Regular walks, free running and playing in a secure area, and dog sports such as agility will keep the GP in peak physical condition. Also needed is the mental stimulation of ‘thinking’ games and exercises such as finding hidden objects, tracking, and other interesting activities.

With correct handling and training methods the German Pinscher can excel in advanced obedience. An independent thinker and of a determined nature the GP is nevertheless willing to learn and happy to please a respected owner. Best results are obtained through the use of positive training techniques as harsh physical or verbal methods will do nothing to gain you the regard of this breed. This is an exceptionally strong dog for its size so training to walk on a loose lead is necessary for the comfort and enjoyment of both dog and owner. Early and frequent socialization is extremely important in order that the dog does not become over-protective or overly suspicious of strangers and that it becomes accustomed to the presence of children, other dogs and animals.

Some photographs of the German Pinscher... 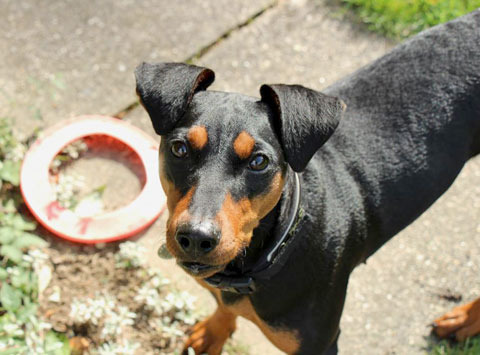 Nala is full of energy, loves to play and has brought so much laughter to our home. She loves learning new tricks but especially loves sneaking onto the sofa for cuddles! For more info and photos, see Nala's thread in our forum.

If you have any suggestions or if you think you’ve spotted an error, please let us know in our German Pinscher forum.