The German Shepherd Dog is probably the most recognisable dog breed in the world - which is quite remarkable given it is also one of the newest. The first German Shepherd Dog society was formed in 1899, the Verein für Deutsche Schäferhunde (the Association for German Shepherd Dogs) and was founded by Captain Max von Stephanitz. Stephanitz's goal was to create the ultimate herding and guard dog, and many would argue he did just that. After being used in the first world war, the popularity of the breed spread like wildfire - which isn't surprising, given how effective and capable the German Shepherd proved himself to be. Nowadays he is used by police and military forces across the world, for various tasks including narcotics detection, crowd control, bomb detection, sentry, tracker of criminals (or lost or injured people) and for attack and disarmament or patrolling military or other bases. Despite strict quarantines, there was a large influx of German Shepherd Dogs into the UK and other Commonwealth countries around the 1920s, and the breed was commonly referred to as the Alsation Wolf Dog - to avoid anti-German sentiment. Over and unscrupulous breeding did lead to problems shortly after the German Shepherd was imported though (particularly in the UK) but this has largely been rectified by diligent breeders - many of which use imported lines in their breeding programmes.

The German Shepherd Dog is steadfast, bold, affectionate and tremendously loyal and sensitive to his owners feelings. He is territorial and self assured, traits which make him a good natural guard. With his supreme intelligence and willing nature to please, he's very trainable for a wide variety of jobs and tasks that take advantage of his traits. Along with his other qualities, of being agile, a great tracker and of impeccable and unwavering temperament, there's no wonder why he excels at so much, from police and military work to being a guide or rescue dog, to taking part (very successfully) in dog sports such as Schutzhund. He is of course, still a very able shepherd's dog, and is still being used as one in some parts of the world. The German Shepherd Dog may well be the most versatile breed we have known, which in part explains why he has such a big following. As the breed has progressed a notable difference between the show bred German Shepherd and the working line German Shepherd has arisen. The working bred German Shepherd is that little bit more alert, tenacious and eager to react - therefore should only go to an experienced home with plenty of experience working with such lively dogs. As a companion, he bonds very well with his family, enchanting them from an early age with his endearing puppy dog eyes and fluffy teddy bear looks - and leaving them as many remark - once a German Shepherd owner, always a German Shepherd owner.

The German Shepherd Dog is an active breed, so their exercise requirements are considerable. Apart from regular daily walks and free-running and play in a secure area, participation in agility, obedience, endurance, Schutzhund, flyball, tracking, hiking, swimming, etc. will keep your German Shepherd fit and healthy in both body and mind. As a large breed, care must be taken not to over-exercise growing dogs.

The German Shepherd is arguably the most trainable and versatile breed, who excels in obedience competition and Schutzhund, as well as almost any other task you ask of or train him for. Being a somewhat dominant dog the German Shepherd needs a strong leader who will be obeyed out of respect rather than out of fear, therefore firm fair, and consistent handling using positive reinforcement is the best way to achieve success. Training involving punishment will undermine the dogs confidence and trust and turn what should be an enjoyable bonding process into an unrewarding experience for all concerned. Early, thorough, and on-going socialisation is essential to avoid problems of shyness, nervousness, and over-protectiveness.

Some photographs of the German Shepherd Dog... 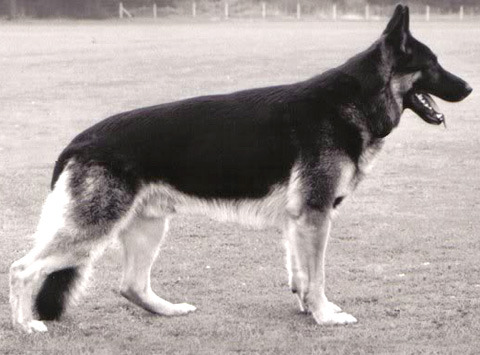 Echo came from Germany as a 13 week old puppy as a gift for my parents. He was a working bred dog, yet was quite successful as a show dog. He had a perfect hip score of 0(0:0) and was used at stud to improve hips & temprament as he was an outstanding character & most important a loving & much loved pet. Sadly he had to be PTS when he was 8 1/2 with liver cancer. 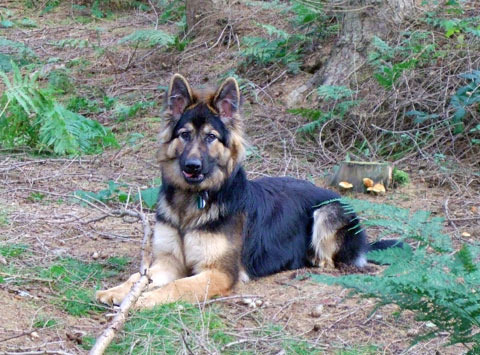 Male GSD (10 months old in this photo) - Grandson of VonGalanberg Kai who came 7th in the 2012 IPO World Championships. For more info and photos, see Kodi's thread in our forum. 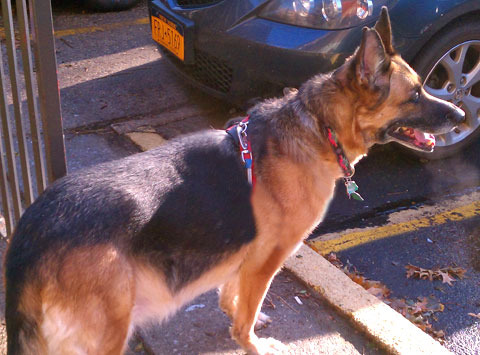 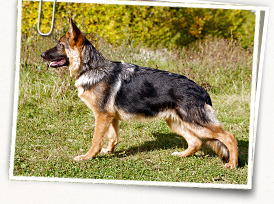 Black or black saddle with tan, or gold to light grey markings. All black, all grey, with lighter or brown markings referred to as Sables. Blues, livers, albinos, whites (i.e. almost pure white dogs with black noses) and near whites undesirable.

If you have any suggestions or if you think you’ve spotted an error, please let us know in our German Shepherd Dog forum.