The Italian Greyhound is also known by the names: Piccolo Levriero Italiano.

The smallest of the ancient family of sight-hounds evidence of the existence of Italian Greyhound type dogs dates back more than 2000 years. Most sources maintain that selective breeding of small Greyhounds resulted in the Italian, but one authority suggests that, based on ancient artefact depictions of both large and small Greyhound types, these diminutive dogs evolved naturally and separately from their larger brethren. Contrary to what one may logically assume the Italian Greyhound did not originate in Italy but, most probably, in Egypt from whence it spread to Greece and Turkey. The designation ‘Italian’ arose from their huge popularity in that country during the Middle Ages. Many Italian Renaissance works of art portray these delicate little dogs and they were great favourites among the nobility and at the royal courts of Italy and Spain during the 15th and 16th centuries. By the 17th century the breed was established in Britain and again caught the fancy of the upper classes and royalty. The popularity of the IG reached a peak during the Victorian era and thereafter declined considerably, to the point that by the end of World War II the breed had all but disappeared in Britain. Fortunately a few dedicated breeders managed to keep going and were able to re-establish a viable population of Italian Greyhounds whose numbers have slowly but steadily increased.

The world of the petite Italian Greyhound revolves around his owners. To them he gives his heart and his soul, his total loyalty and utter devotion. In return all he asks is to be equally loved and to be allowed to be with them and to share their lives as a valued member of the family. This is not a dog to be relegated to a lonesome existence, either indoors or outside. Deprived of company and affection he will fail to thrive, become depressed and fretful, and may resort to destructive behaviour to relieve his anxieties. He has a most gentle nature and is very sensitive. He needs a calm, harmonious atmosphere at home as he will be upset by tensions and angry voices, particularly should the latter be directed at him. Harsh words will hurt him and cause him great grief. Although his slender frame and habit of shivering when worried or excited give him an appearance of great fragility he is a relatively sturdy dog. However, he does have fine, delicate bones and his legs are particularly vulnerable to injury. Things such as rough play with other dogs and children, jumping from heights, hard running, and other high impact activities should be avoided. He can be rather aloof with strangers but this can be through lack of interest rather than timidity. The IG is usually a quiet dog but he will bark to alert to the approach of strangers - he has a deep bark for his size rather than a ‘yap’. For those that realize that, although he loves his comforts and enjoys a cuddle, the IG is more than an ornamental lap dog he will prove to be a vivacious, cheerful, and charming companion. Recommended for individuals or families with older, considerate children.

Designated as a Toy but descended from coursing hounds the Italian Greyhound needs plenty of exercise. He should have at least one decent walk each day which will keep him fit and provide him with mental stimulation in the shape of interesting sights and scents and people to meet. Off-lead exercise will delight him but it should be carried out in a secure area. Many IGs still have the instinct to hunt small game and will take off after an intriguing smell or rustle. He may also bolt if alarmed or if in a ‘chase me’ mood. With thin skin and a fine coat the Italian Greyhound will feel the cold so he should wear suitable protection when walking in inclement weather.

Basic obedience training should be started as early as possible. Despite his small size the IG is a dog and he needs and deserves to know the boundaries of acceptable behaviour. Pampering and indulging him will result in a tiny tyrant. He will be much happier and more relaxed knowing that his owner is in charge. All training should be done using positive methods which reinforce good behaviour with rewards of treats and praise. He is very intelligent and he has a great desire to please his loved and respected owners, so harsh physical and verbal corrections are unnecessary and may physically and psychologically damage him. It is important to accustom him to various sights, sounds, people, dogs, etc. from an early age. This process of socialization will reduce any tendency towards nervousness and shyness and he will develop into a confident, friendly and stable adult.

Some photographs of the Italian Greyhound... 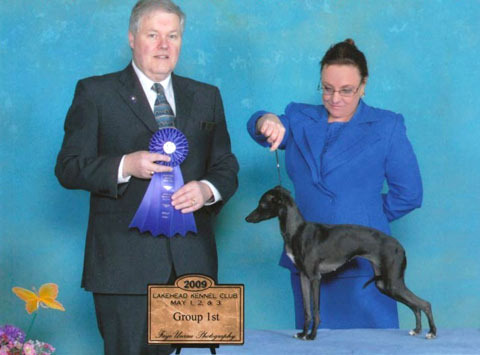 Trya banks (full name BIS Intl./Can./Am. Ch. Noblewinds Am. Next Top Model of Allure) is a multiple Champion, and in our opinion is the ideal Italian Grehound.

If you have any suggestions or if you think you’ve spotted an error, please let us know in our Italian Greyhound forum.