The Miniature Pinscher is also known by the names: Min Pin, Zwergpinscher.

Contrary to appearances the Miniature Pinscher, developed in Germany, is not a small-scale version of the Dobermann, in fact as a breed the MinPin pre-dates the Dobermann by around 200 years as is evidenced by 17th century paintings which depict dogs which are unmistakably of the MinPin type. However no documentary references exist prior to the 1800s. The breed is generally agreed to have been developed from old German smooth-haired Pinschers, many small examples of which are known to have existed in the 16th century. The addition of Italian Greyhound and possibly Dachshund blood would account for the breeds distinctive high-stepping hackney gait and the deep red colouring of some MinPins. Rather than being bred specifically as a companion/lap dog the Miniature Pinscher earned his keep as a first class ratter and vermin controller around the house, traits which are still present in the modern dog. Prior to 1900 the breed was little known outside Germany and did not achieve much popularity until after World War II and the relaxation of the disapproval which attached to all things German.

It is only by virtue of his size that the Miniature Pinscher can be described as small, everything else about him is big - his heart, his mind, his spirit, his confidence - he truly is a dog who looks in the mirror and sees a tiger. He is a devoted and affectionate companion who enjoys being with his people and being included in as many of their activities as possible, but he has a certain independence and great self-possession so may not fit the traditional image of a dainty, decorative, dependent Toy breed. He is also a very active little dog, full of life and almost crackling with energy. Being hard as nails and as game as they come he will not hesitate to take up a challenge from a much larger dog, nor will he think twice about attacking a rat bigger than himself. He has very keen hearing and makes an excellent watchdog. Intruders will be faced with a fearless little spitfire who announces their presence with outraged barking but, once introduced and satisfied that there is no threat to home and family, the MinPin is willing to make friends. Inappropriate barking should be discouraged from the start lest he develop into a nuisance yapper. Although he is sturdy and loves fun and games he is not the best choice of playmate for young children as he may lose patience with clumsy handling or teasing. Gardens need secure fencing as he is a good jumper and an inquisitive fellow who will try to escape if he finds something of interest to investigate. The smart, dynamic, bold Miniature Pinscher with his enduring loyalty and sparkling personality can be a delightful companion but the breed is not recommended for inexperienced owners.

From the MinPins point of view - the more the better. Much of his physical exercise requirements can be met with vigorous games around the house and garden, but a daily walk will provide him with mental stimulation and help satisfy his curiosity about the world around him. Off lead exercise will be appreciated but this should be carried out only in a safe area as he will follow his nose should he catch the scent of rodents or other small animals. He is quite sensitive to cold so he should be coated for walks in chilly or wet weather. MinPins can do well at obedience and agility, both of which sports provide physical and mental exercise.

Having a fairly strong will and a good opinion of himself the Miniature Pinscher will try to rule the roost if from the outset he is not kindly, but firmly, shown his place in the scheme of things. Basic obedience training should be commenced as soon as possible. He is an intelligent dog, quick to learn and responsive to an owner he trusts and respects. Only positive methods which reward good behaviour with treats and praise should be used. Heavy handed methods and angry reprimands will only confuse him, erode his trust, and slow the learning process. Socialization should also be started in early puppyhood. The introduction at a young age to all sorts of people, noises, situations, other animals, etc. will prepare him for life in the human world. The well trained, well socialized Miniature Pinscher is a joy to live with and will earn the respect and admiration of the wider community.

Some photographs of the Miniature Pinscher... 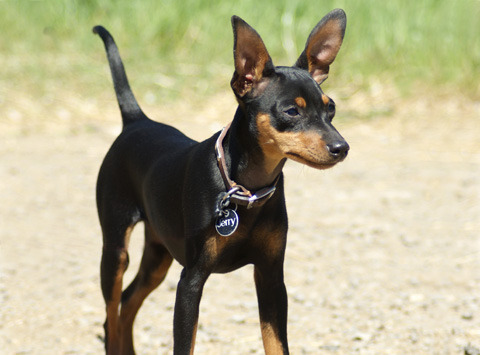 Our ten week old Miniature Pinscher who also featured on the cover of the Caninelife magazine - our daughters now think Jerry is a superstar! 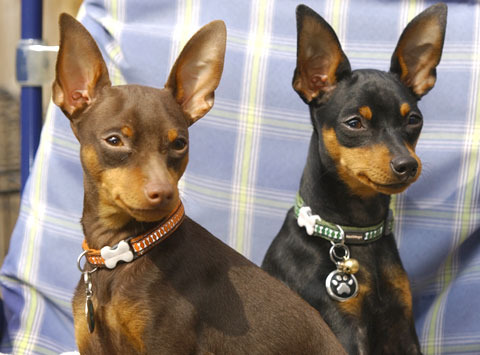 Dublin and Kingston, owned by Stacey in London, UK

These are my two beautiful min pin boys, they are chalk and cheese in personality BUT they love each other and look out for each other. Dubs is reserved and aloof and King is mad as can be! 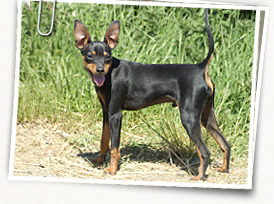 If you have any suggestions or if you think you’ve spotted an error, please let us know in our Miniature Pinscher forum.