The Pomeranian is a member of the ancient family of Spitz dogs which originated in the Arctic region of Russia and Siberia. These herding, guarding, and sled-pulling dogs, by some means, made their way to the area of Germany/Poland which was known as Pomerania where the smaller types were bred and used to herd sheep or to be companion dogs. In 1761 the breed was introduced to Britain by Queen Charlotte, but it was not until Queen Victoria took an interest in them and began showing and breeding Pomeranians that their popularity increased and they became a fashionable accessory for society ladies. The Poms of that era were large compared with those of the present day, many weighing around 13.6 kg (30 lbs). Queen Victoria is credited with importing small specimens and starting the selective breeding which has resulted in today’s diminutive and dainty types. The Pomeranian was first recognized by the Kennel Club in 1870.

Although he is small the Pomeranian has a big heart, a big personality, and plenty of spirit. He is very affectionate and his natural place is with his family. Devoted to his owners he enjoys nothing more than being with them wherever they are and whatever they are doing. He is a friendly and extroverted fellow but also a most efficient watchdog. Always alert and protective of his home and people he will raise the alarm should strangers approach or should any disturbance occur on his territory. When meeting other dogs he is usually not bothered by their size and is willing to be friends but, should a challenge be issued he will show himself to be quite fearless and will not backdown even when the odds, by virtue of size and weight, are against him. His docility and happy disposition make him a good friend for older, considerate children but the breed is not recommended for families with very young children as he can easily be hurt by inept handling and may be overwhelmed by noisy, frantic games. As cute and winsome as he may be the Pom should not be over-indulged with cosseting and ‘babying’. He is a dog and, like any dog, for his happiness he needs to know the boundaries of acceptable behaviour. Vivacious, light-hearted, faithful, loving, and very intelligent the compact Pomeranian has a myriad fine qualities that make him a rewarding and enjoyable companion.

Being a naturally energetic little dog the Pom will obtain a great deal of his exercise through playing active games and busying himself around the house and garden. However, he does love to get out and about. A daily walk will give him pleasure as it will satisfy his inquisitive mind and help to keep him mentally stimulated as well as physically fit. Being quick and nimble he is a good candidate for the canine sport of agility.

Basic obedience training should be commenced as soon as possible in order that the Pomeranian should be a joy to live with and socially acceptable. He is an extremely intelligent dog and many Poms have competed successfully at the highest levels of formal obedience. He is not difficult to train but all training should be based on positive methods which use treats and praise as rewards for good work. Harsh physical or verbal methods are quite unnecessary and, if used, will erode the bonds of affection, trust and respect which should be the foundation of all successful training. It is important that socialization should start in early puppyhood. By accustoming the pup to as many as possible of the people, sights, sounds, animals, situations etc. that he may be expected to encounter during his life he will grow to be a well mannered, friendly, level-headed adult of whom to be proud.

Some photographs of the Pomeranian... 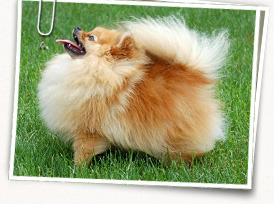 If you have any suggestions or if you think you’ve spotted an error, please let us know in our Pomeranian forum.