Small white dogs are known to have existed in the Mediterranean countries for more than 2000 years and it is believed that these indigenous dogs and the French water spaniel, the Barbet, are the root-stock from which developed the Bichon Frise (also known as the Bichon a Poile Frise or the Bichon Tenerife). The word Bichon itself comes from the diminutive term for the Barbet - ‘barbichon’. These conveniently sized dogs accompanied sailors on their voyages as companions and trading goods and found themselves living in many foreign lands. In the 14th century the Bichon was reintroduced into Europe by sailors returning from Tenerife. It became a favourite of royal courts and appeared in many works of art including paintings by Murillo and Goya. The French Revolution of 1789 saw the Bichon fall from grace but it bounced back as a circus attraction and street performer. Both World Wars had a severe impact on numbers, but in each case the breed survived due to the dedication of a few enthusiasts who worked to ensure its survival. Although the Bichon did not arrive in Britain until the latter half of the 20th century it has quickly become one of the most popular of the Toy breeds.

From the start of his history the Bichon Frise has been bred to fulfil the role of companion dog, an important function which he accomplishes effortlessly. This little fellow is overflowing with charm and can disarm even the most hardened of “only big dogs for me” persons. He is a friendly extrovert who genuinely likes people and delights in being the focus of attention and admiration, but the centre of his world is his family. He is most definitely not to be thought of as an outside dog. Centuries of close proximity and constant attachment to people means that he needs human company, and if deprived of this he will be miserable and fail to thrive. He should be allowed to share the comforts of home and hearth and always be regarded as an integral part of the family. Because of his cute appearance and beguiling ways, especially as a tiny fluff-ball puppy, the temptation is to cosset and indulge him. This temptation must be resisted. He is as much of a dog as is a Mastiff and he needs firm, fair handling from the outset. Failure to educate him and set the boundaries of acceptable behaviour will result in a dog who will take over the reins and have his owners dancing to any tune he cares to play. He is generally quite amiable with other dogs and is reliable with considerate children who understand that he is not a toy and that he is not suited to rough play and teasing. While the Bichon is not a guard dog he is an effective watchdog who will sound the alarm should ‘trespassers’ encroach upon his territory. The playful, sensitive, and cheerful Bichon Frise is a splendid choice of companion for families and individuals of all ages.

The Bichon Frise will enthusiastically participate in almost as much exercise as is offered. He is a very active, inquisitive fellow so interesting daily walks will keep him in good condition physically, prevent him becoming overweight and lazy, and will supply mental stimulation. He will also respond well to playing games and learning tricks. The canine sports of agility and obedience are well suited to this breed and Bichons are successful at the highest levels of competition. He has also proved to be an excellent therapy dog bringing pleasure and comfort to young and old alike.

Basic obedience training should be commenced as early as possible to ensure that the Bichon develops into an enjoyable friend and is acceptable to society in general. Being a very intelligent dog and willing to work with a loved and respected handler he is receptive to training. His quick mind means that commands are swiftly learned and carried out. Only positive methods which reinforce good behaviour with praise and treats should be used. Heavy-handed methods which rely on harsh physical or verbal discipline will fail miserably and may result in a dog that is crushed in spirit and too afraid to do anything at all in case he is punished. Socialization should start as soon as possible. The Bichon who is accustomed from a young age to all sorts of people, noises, sights, other dogs and animals will mature into a self-confident, vivacious, sensible adult who is a pleasure to live with and an outstanding representative of his breed.

Some photographs of the Bichon Frise... 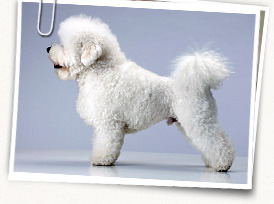 If you have any suggestions or if you think you’ve spotted an error, please let us know in our Bichon Frise forum.