The Chihuahua is regarded as being of Mexican origin and is named after a State in that country. The breeds exact origin however is obscure. There are various, conflicting, theories: 1) Chihuahuas were an indigenous Mexican breed discovered and brought to Europe by the Spanish conquistadors; 2) the conquistadors introduced the Chihuahua to Mexico; 3) the breed was introduced to Central America by Chinese traders; 4) the dogs originated in North Africa and were taken via Malta to Mexico. Their place in the culture of the Aztecs and Toltecs also seems to be conjectural and unsubstantiated. There is no reliable reference to the history of the breed prior to the 1850s when visitors to Mexico imported the tiny dogs into the U.S.A. and no documented reference to the breed between the early 16th and middle to late 19th centuries. Chihuahuas were first shown at Crufts in 1936 but did not start their rise to popularity until the middle of the 20th century.

He may be the smallest of all the breeds of dog but within the Chihuahuas tiny frame is a real dog with all the instincts and needs of any other canine. Certainly his capacity for love and loyalty bears no relationship to his size. He is an extremely devoted dog who will form a very strong bond of attachment to his owner, sometimes to the extent of becoming overly protective and begrudging of attention given elsewhere. However, such undesirable tendencies are unlikely to occur if he is firmly and sensibly trained from the outset. His owners are the sun in his sky and he needs a great deal of their company and interaction. He dislikes being left alone for any length of time and may express his loneliness by being destructive, but fortunately he is quite portable so his desire to be with his people can quite often be satisfied. With strangers he can be somewhat wary or reserved and he may take a while to feel comfortable with unknown visitors to the home, but he should not be snappy or nervous. As a watchdog he is excellent. Always alert and interested in what is going on he will give good warning of the approach of trespassers or of anything else untoward happening on his territory. He is a bold and courageous little fellow and if provoked will (sometimes unwisely) take on any perceived threat no matter how daunting the task may appear to be. The Chihuahua is a dainty, fine-boned dog and, although he is energetic, he is not a suitable playmate for young children as he can be injured through mishandling, especially when a puppy, and his forceful personality will not take well to teasing. Special care in handling must be taken if the Chi has an open fontanel (molera). He can have mixed reactions to other dogs but would seem to be most at ease with those of his own breed. For those who understand that he is not a toy or a baby which needs to be carried about all the time, cosseted and indulged, but a spirited, cheerful, sometimes feisty dog, the Chihuahua is an excellent companion.

The Chihuahuas exercise requirements can almost be met with running around the house and garden and playing games, but he is a smart little dog and needs mental as well as physical exercise. A daily walk will provide him with interesting sights and smells to keep his mind busy and will satisfy his inquisitive nature. As he does feel the cold he should wear a coat when walked during chilly or wet weather.

Basic obedience training of the Chihuahua should be commenced as early as possible in order that he develops into a dog that is a joy to live with and one that is welcome wherever he goes in society. He is highly intelligent and very trainable providing that positive methods are practised using treats and sincere praise for good work. Impatience and harsh verbal or physical methods will have only negative effects on his rate of learning and willingness to comply and will destroy his trust. If there is a rapport based on mutual respect and affection then he will enjoy working with you and will give of his best. It is important that socialization of the Chihuahua puppy should start as early as possible. By accustoming the pup to meeting various people, introducing him to all sorts of novel sights, sounds, situations and other dogs he will mature into a confident, well-adjusted, sociable adult.

Some photographs of the Chihuahua... 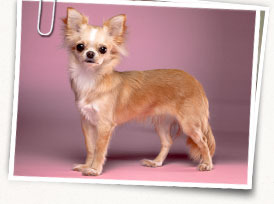 Any colour or mixture of colours

If you have any suggestions or if you think you’ve spotted an error, please let us know in our Chihuahua forum.