The Foxhound originated in Britain and is believed to have evolved from the crossing of local dogs with imported French hounds and the later admixture of Greyhound, Bulldog, and Fox Terrier blood. Prior to the 18th century it was considered beneath the dignity of the stag-hunting gentry to hunt foxes which were regarded as vermin, but packs of hounds dedicated to the pursuit of the fox were in existence in the 17th century and one of the oldest and most famous hunts, the Quorn, was established in 1696. As Britain became industrialized and forests diminished and road, rail and canal dissected the tracts of open land required for deer-hunting the wealthy turned to the fox for sport. By 1800 large packs of foxhounds were to be found throughout the country. Meticulous records of breeding were kept and these stud books are still in existence, which makes it possible to trace the lineage of particular hounds back over 200 years. The Foxhound therefore has the distinction of being the breed with the oldest recorded pedigree. Bred over the centuries for one purpose only, the chasing and killing of the fox, these hounds are uncommon in the show-ring and rarely encountered as pets.

The Foxhound is first and foremost a working pack dog. This means that he needs the constant companionship of other dogs or people. His highly developed pack instinct tends to suppress aggressive behaviour towards other dogs and, in the absence of other household canines, he will bond very closely with his owners. This hard-wired pack mentality makes him totally unsuited to a solitary life and, if left alone for more than short periods, he will become depressed and may display unacceptable behaviours which stem from stress and misery. Given considerable attention and interaction he can be an affectionate and rewarding companion. As with most hounds he is generally good with children and unaggressive toward people but he will bark and alert to strangers approaching his territory. The voice of the Foxhound is music to the ears of the huntsman, but may not be so popular with neighbours and garden fences need to be very secure as he will not think twice about jumping to pursue an interesting smell and, once on the trail, may become lost, stolen or injured. This breed is not recommended for inexperienced owners and is not suited to a confined life in an apartment or the city. He needs the wide open spaces, a great deal of exercise, firm leadership, and constant company. Anyone considering this breed as a pet should obtain a dog from show lines rather than one from working stock.

The exercise requirements of the adult Foxhound are considerable. It would not be unusual for a working hound to cover distances of more than 30 km (50 miles) in a days hunting. This would be in all weathers, over all kinds of terrain, and would include jumping hedges and ditches and barging through heavy cover. The average owner could not provide such extensive and varied exercise but an effort should be made to replicate it as far as possible with daily long walks and the opportunity to run free in a safe area.. The Foxhounds natural instincts and enthusiasm for the hunt may make off-lead exercise problematical as he is likely to take off after a scent and anything that runs from him will be pursued and possibly killed. Being an intelligent dog he also needs the mental stimulation provided by walks and being out and about in the countryside. The sport of agility will provide an outlet for some of his energy and athleticism as well as giving him something to think about.

Basic obedience training should be commenced at a young age. This will not only ensure that he becomes a pleasant companion and socially acceptable but it will also provide him with opportunities to use his brain. The Foxhound is responsive to those who gain his respect and affection. He is quick to learn but great patience is needed in training as he is very easily distracted by scents on the ground or in the air. Positive reinforcement using praise and treats for good efforts and work well done will achieve the best results. Harsh methods are unnecessary and, if used, may result in this gentle dog becoming fearful, confused and broken in spirit. Socialization should also start as soon as possible and should be on-going. This involves accustoming him to as many different kinds of people, places, sights, sounds and situations as possible. Adequate training and socialization will ensure that the dog grows to be a well-mannered, sensible and confident adult.

Some photographs of the Foxhound... 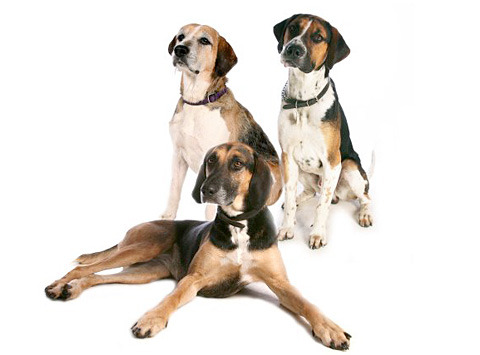 Dazzleby Dawson, proudly owned by myself and Mrs R Griffiths (his breeder), Penny Returns Most Often, and Crazy Miss Daisy - all sitting here nicely for their photograph. 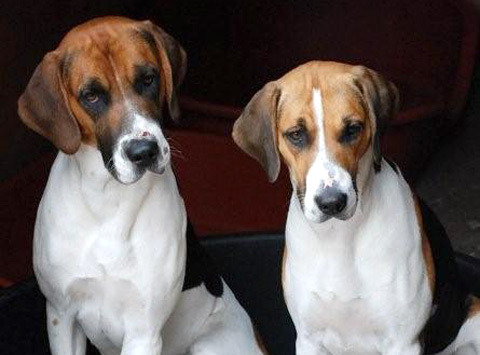 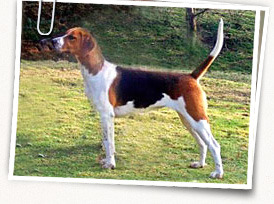 Any recognized hound colour and markings

If you have any suggestions or if you think you’ve spotted an error, please let us know in our Foxhound forum.