The Griffon Bruxellois (also known as the Brussels Griffon or the Griffon Belge) originated, as the name indicates, in Belgium. There are some suggestions that the Flemish painter Jan van Eyck (ca 1395-1441) portrayed Griffons in his works. Certainly it would seem to be a rather old breed and to have existed in Belgium from the 16th century. The ancestors of the Griffon were the ubiquitous street dogs of Brussels, many of which were employed as rat catchers in coaching stables where they were known as Griffons decurie. They also accompanied the coachmen on their journeys and became something of a mascot. Even today many of the citys taxis display a Griffon Bruxellois sticker. The development of the breed entailed the addition of some rather more aristocratic blood to the humble ratters. It is believed that the ruby King Charles Spaniel and the Affenpinscher were influential in determining the head shape and some sources suggest Yorkshire Terriers and Irish Terriers also contributed to the breed. The Pug is accepted as having played its part also, particularly in the smooth-coated Griffon (the Petit Brabancon). The appealing features of the Griffon endeared it to the general public and saw it move from stable dog to house dog and companion. The breed was first introduced into Britain at the end of the 19th century.

This captivating little dog exudes personality. Sturdy and lively with an air of self-importance the Griffon Bruxellois is a delightful companion whose second name should be devotion and whose third name should be shadow. The sun, moon and stars in the Griffons universe are his owners and he hates not being with them. Whatever you may be doing, even mundane chores, look around and there he will be, perfectly happy just to be close by. This constancy does mean however that he may express his unhappiness by nuisance barking if left alone and he may become overly possessive of his people and jealous of anyone or anything that takes their attention from himself. Early, confidence-building training can overcome these tendencies. Despite his small stature the Griffon is brave and bold - terrier qualities that can get him into trouble with larger, stronger dogs should he issue or accept a challenge. He is a good watchdog as he is quite territorial and observant of all that goes on. He is also very inquisitive so his garden needs secure fencing lest he should wander off in pursuit of whatever has aroused his curiosity. The ratting instinct of his ancestors may have been considerably modified, but it is still there and he will hunt and kill small rodents. Griffons do not take kindly to rough handling, poking, pulling, or teasing so this is not a breed recommended for families with young children. He can be rather reserved in his attitude to strangers, taking his time to weigh them up rather than rushing in to insist on petting. For those who can accommodate his need for attention and company, and can provide clear and gentle leadership, the Griffon will prove to be an engaging and loyal addition to the household.

The exercise requirements of the Griffon Bruxellois are modest. He is an active dog who will busy himself around his territory but he delights in an outing and the effort should be made to take him for a good daily walk. This will not only keep him physically fit but will provide interest for his enquiring mind in the form of diverting scents and sights. Being a short-muzzled dog care must be taken that he does not become over-heated during hot weather. Being both strong and nimble he will enjoy, and can do well in, the canine sport of agility.

As small and winsome as he may be the Griffon needs to be educated in what is and what is not acceptable behaviour. He will be more relaxed and much happier if he is aware of the boundaries and understands his place in the family. Basic obedience training should start as early as possible. He is a very intelligent, sensitive dog and is always willing to please loved and respected owners. Positive methods using treats and praise will bring out the best in him and, using firm, gentle, consistent training which is made fun and interesting for the dog, Griffons Bruxellois have succeeded at the highest levels of competitive obedience. Harsh physical or verbal methods will only cause confusion, loss of trust and respect, and a reluctance to work with you. Early and ongoing socialization is important. By accustoming the pup to a variety of people, animals, sights, sounds, etc. he will mature into a well-adjusted, friendly and confident adult.

Some photographs of the Griffon Bruxellois... 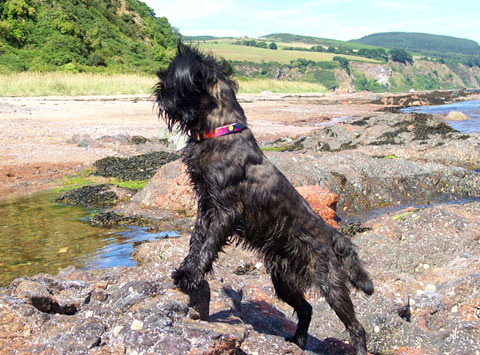 If you have any suggestions or if you think you’ve spotted an error, please let us know in our Griffon Bruxellois forum.